When I first started my classic car blog in 2011 I called it ‘twincam serendipity’. Twincam as in ‘car’ and serendipity because it was my intention to report on unplanned encounters with rare and exotic cars. And that is exactly what I did in the early years; then I started writing about particular marques that I had been involved in during my working life. I cheated on the serendipity objective by attending organised car shows where I knew that I would be seeing classic cars. In 2016 the blog transitioned into a WordPress website with a change of name to the more prosaic Carsceneinternational.com.

The reason I am telling you this is because in December I had a significant automotive serendipitous moment. A former Peugeot colleague of mine, Andy Bye, is a trustee of the Rootes Archive Trust, we have kept in touch with each other and often meet to compare notes on our respective archives, his Rootes, mine Healey. In early December he suggested that we should meet for a coffee in Kenilworth, he had some interesting news to tell me. We had arranged to meet at the Costa Cafe on Kenilworth High Street but when we arrived we found that the coffee machine was “out of order”, would you believe it? So we went to the Almanack just a short walk away at Abbey End North. What a find, an excellent cafe/restaurant with a good atmosphere, we will certainly be going there again.

Andy came with some documents tucked under his arm in addition to his lap-top. The main thrust of what he wanted to tell me was that the Rootes Archive Trust had been contacted by a lady living in the U.S.A. asking if the Trust would be intersted in taking possession of some artefacts which had belonged to her late paternal Grandfather. He had been employed by the Rootes Group both in the US and the UK. It transpired that he had also worked for a short while for Donald Healey in the US. It was because of this latter connection that Andy wanted to meet me. The lady, Tara Waltman (any American automotive historians or Morgan car enthusiasts might recognise that surname – more on that later), said that she had some photos and artefacts from her Grandfather’s time with Healey and wondered if the Rootes archive would be interested in those too; or if not, if they could put her in touch with someone who could advise. Andy told her that he knew just the man and of course, that was the reason for our meeting.

I contacted Tara and received from her some fascinating information both concerning her Grandfather, Cecil R. “Mick” Melton and her father, George Waltman.

Mr. Melton, who for reasons not explained was referred to as “Mick”, joined Rootes in 1946 after being demobbed from the RAF. In 1949 he moved his family to New York to work directly for Brian Rootes (second son of the first Lord William Rootes), with a sales area described as “Whole of America”! Throughout his career, he spent considerable time overseas visiting many places, including Portugal, Arabia and Beirut. In 1962 he returned to England and joined the Head Office team at Devonshire House, until his retirement in 1966. Between 1953 and 1954 Cecil worked for Donald Healey probably as his U.S. sales representative. In that capacity, he was befreinded by Jackie Cooper the film star and Austin Healey 100 racing car driver (see photos below).

In our correspondence, Tara mentioned that her Father was George Waltman, an endurance racing driver in the 1950s and 60s. I did some internet research and found an interesting article/obituary written in a 2013 edition of the Sports Car Digest. My first inclination was to reproduce snippets from that article in this post. I shared that thought, with Tara; after reading it she pointed out that whilst it was a glowing testament to her Father it contained too many inaccuracies for it to be credible. She suggested that I read an article that was published by Godwin Kelly motorsports Editor of the Daytona Beach News Journal  around the time of the 2018 Daytona Rolex 24 Hour race – 50 years after her Father’s stunning achievement. Here is the gist of that article, to which Tara herself had contributed –

Fifty years ago George Waltman took a car that a friend (Ali Lugo) had found in a Police impound lot in the Bronx, N.Y. and drove it down to Florida for the 1968 Rolex 24 at the Daytona International Speedway. The car was a most unlikely (re an entry for this race) Morgan Plus 4 street car. George drove it all the way to Daytona Fl., completed the race, took a side trip to Miami after the race and then drove all the way back to New York. Waltman set a Daytona International Speedway and sports car record that is unlikely to be beaten. He is the only driver in the Rolex 24 at Daytona to have driven and completed the entire race by himself. The rules pertaining today say that each car entered must be assigned a minimum of three drivers, all of whom must take a stint at the wheel.

There was at least one rule that Waltman was forced to adhere to, that was taking an hour’s rest after every four hours of racing. His race wasn’t without incident. With an hour to go to the end of the race a piece of the car’s cooling fan broke off and punctured the radiator. Waltman was forced to pit. Faced with a leaking radiator the ever resourceful George started chewing some gum and handed sticks to those standing in the pits. He collected all the masticated polyisobutylene, rolled it together and bunged it into the hole in the radiator effecting a satisfactory seal; certainly sufficiently good enough for him to finsh the race in 30th position.

Legend has it that George did all his own servicing during the race but Tara tells me that his friend Ali Lugo and an unknown other were there to lend hand.

George served in 20 Bomber Command in the Pacific theatre during WWII. After the war he worked for BOAC both in the U.S. and the U.K. where he met his future wife Moya Melton, Tara’s mum. Moya’s younger sister, Sue, also married an American, Bob Schultz. Sue, who lives in the U.K. has played a significant part in piecing together her Father’s (Cecil Melton) story. 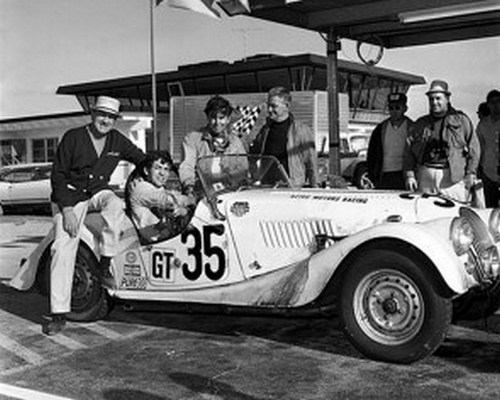 George Waltman’s Morgan Plus 4 . The people ar L to R are  Frank Blunk (reporter) Ali Lugo (seated – owner of the car), George Waltman and an unamed pit helper – this guy just showed up to give George and Ali a hand in maintaining the car during the race. Truly an “unsung hero”.

Thanks to Tara’s dediction to her Father’s memory and the cooperation of Herb Branham, Director, ISC & Research Center at the Daytona International Speedway, there is now a small exhibition dedicted to George Waltman at the Center. Please do call in and have a look when you are down that way.

Back to ‘Mick’ Melton – here is a photo of members of the Rootes family including Mick’s boss Brian Rootes. 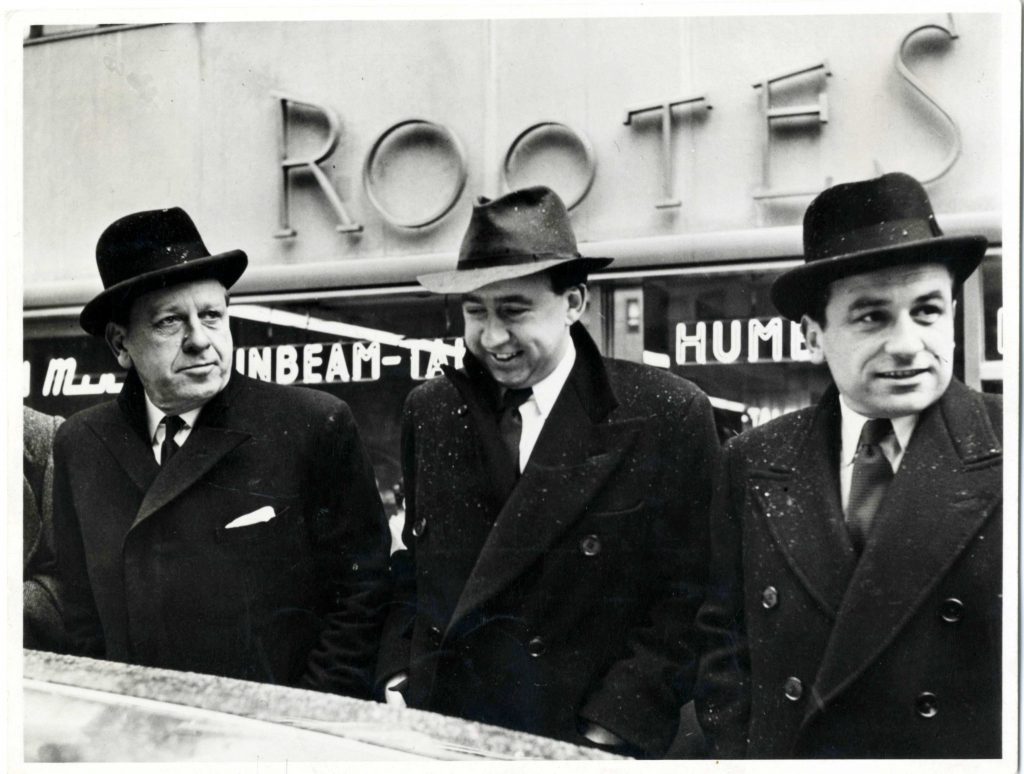 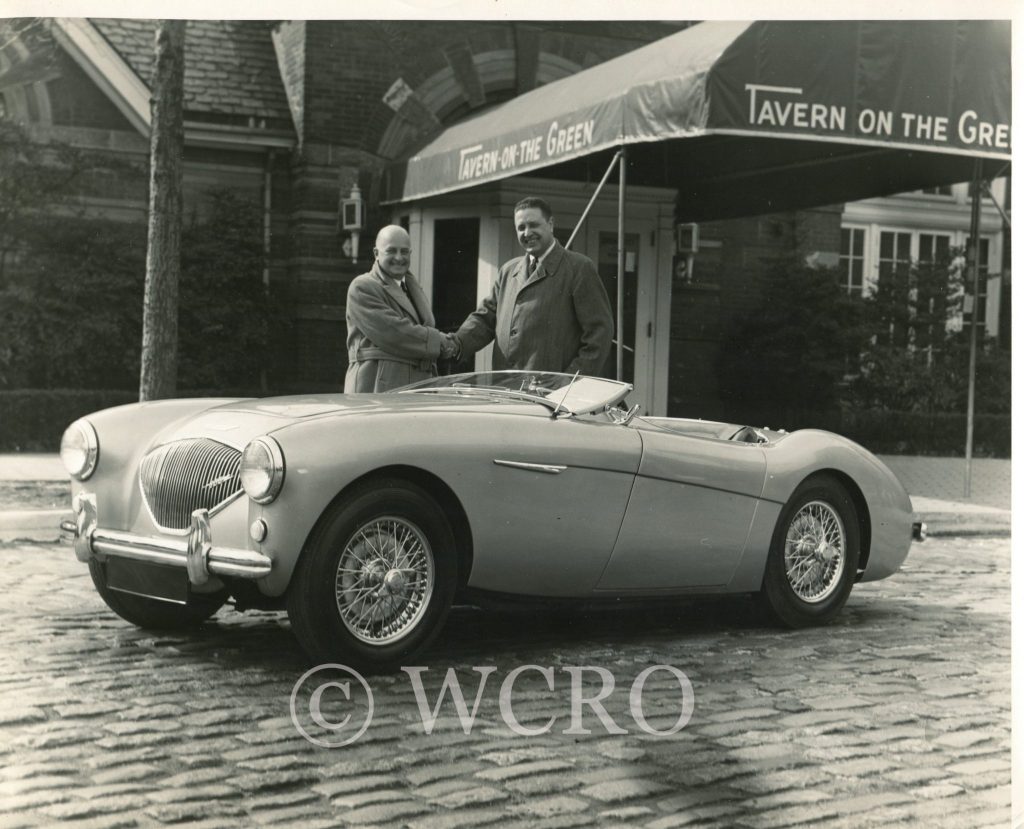 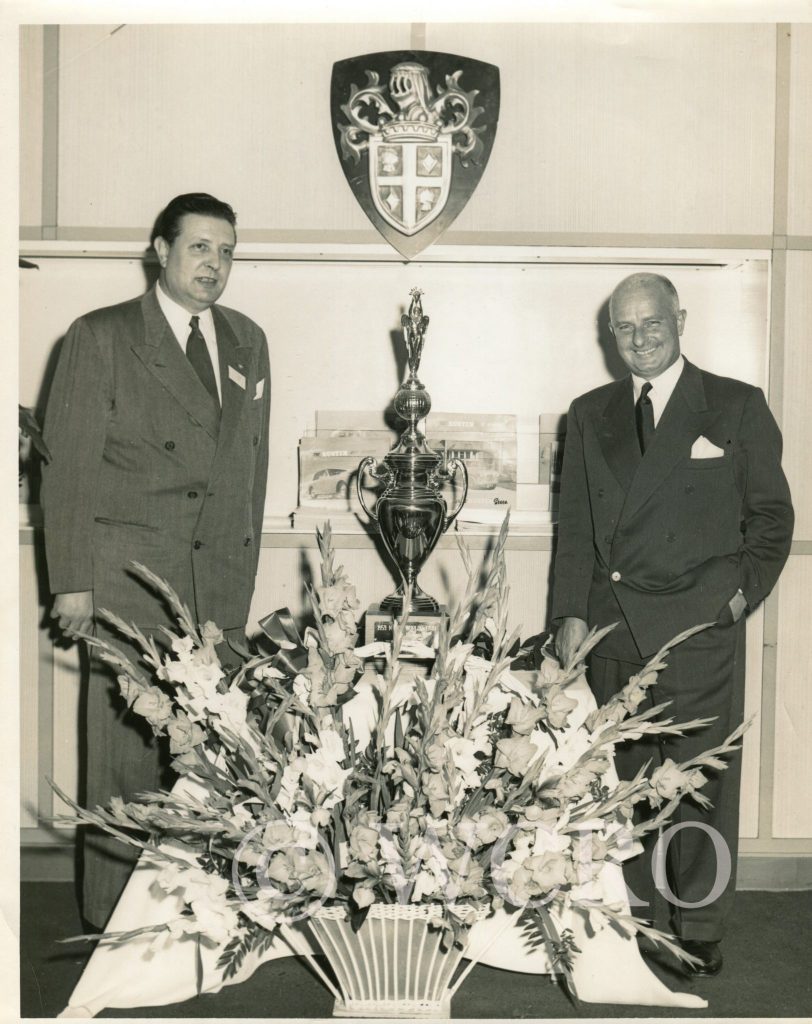 CR4804/3/142 ** Donald Healey and ‘Mick’ Melton with the ‘Grand Premium Award’ cup up won by the Austin Healey 100 at the 1953 Miami World’s Fair. This cup is currently on display at the Healey Museum in the Netherlands. 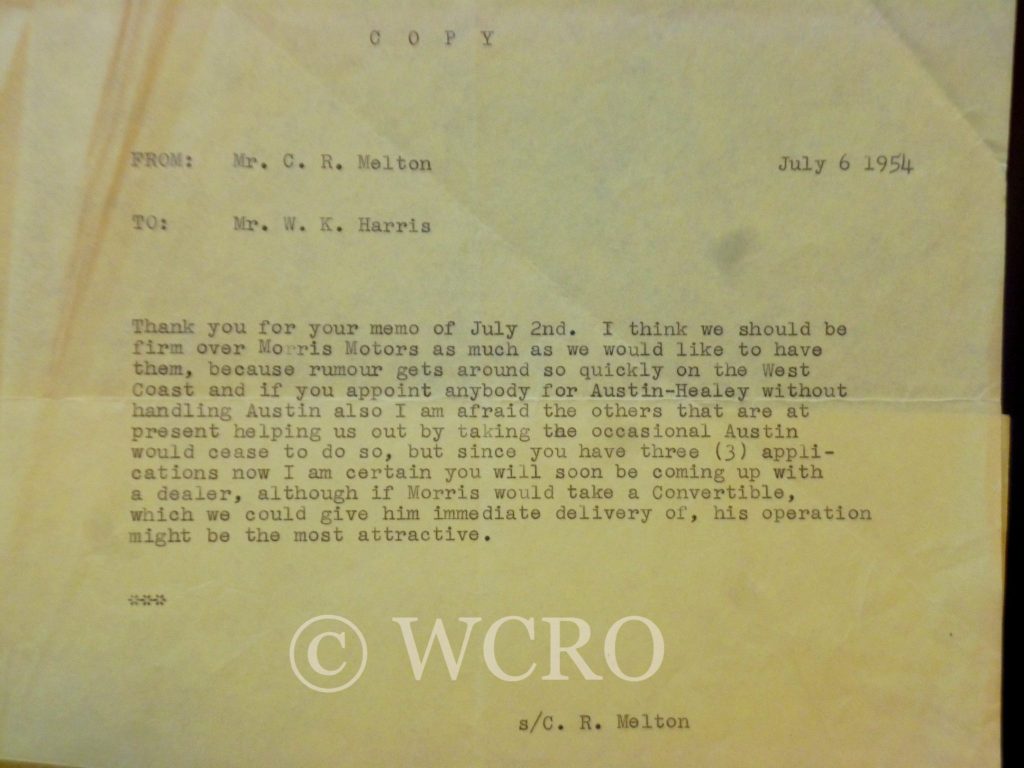 CR4804/2/16** A memo written by C.R. Melton during his employment with the Donald Healey Motor Company.

Jackie Cooper, who died in May 2011, first rose to stardom as a child actor in the “Our Gang” series of American film comedies during the 1930s. He went on to have success as a director of TV shows in the 1970s as well as playing the role of Perry White, the Daily Planet’s editor, in four Superman films at the end of the 70s. He served in the US Navy during WWII. He was also a committed car enthusiast, owning one of the first four Austin-Healey 100S race cars to be imported into the United States. The photo below shows those cars before they left Warwick for the States with Donald Healey second from right. Just 50 examples of the 100S were built in total. The cars were entered for the 1955 Sebring 12 hours race with drivers including Stirling Moss and Lance Macklin. Jackie’s co drive was Brit Roy Jackson-Moore. Cooper had got the car into seventh place overall but the it suffered an electrical failure. His “never say die” spirit caused him to push the car for a mile back to the pits where repairs were effected. The car eventually finished in 42nd place.

Jackie took delivery of one of the first Austin Healey 100s to arrive in the U.S. in 1953. It was used  for both daily commuting and racing which was not unusual in those days. He was particularly successful in SCCA races held on circuits in the North East of the United States. It was his ‘class’ win in one such race at Suffolk County Airforce Base, NY. in 1954, that is celebrated in this photo of Melton family artefacts. The photo shown in the collection features ‘Mick’ Melton together with Jackie Cooper. 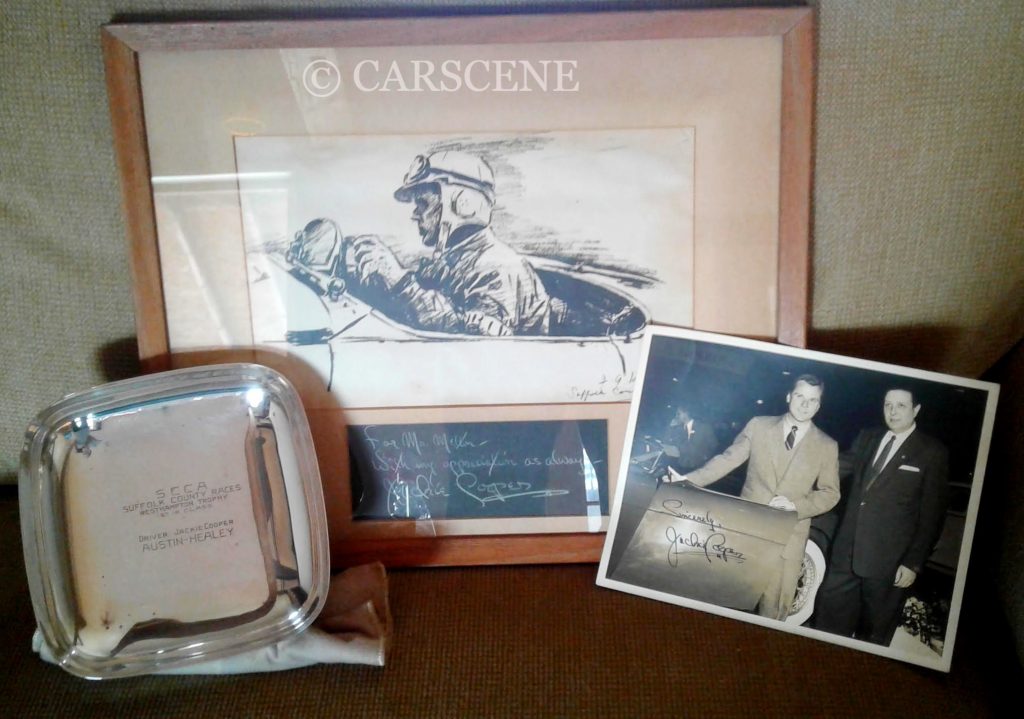 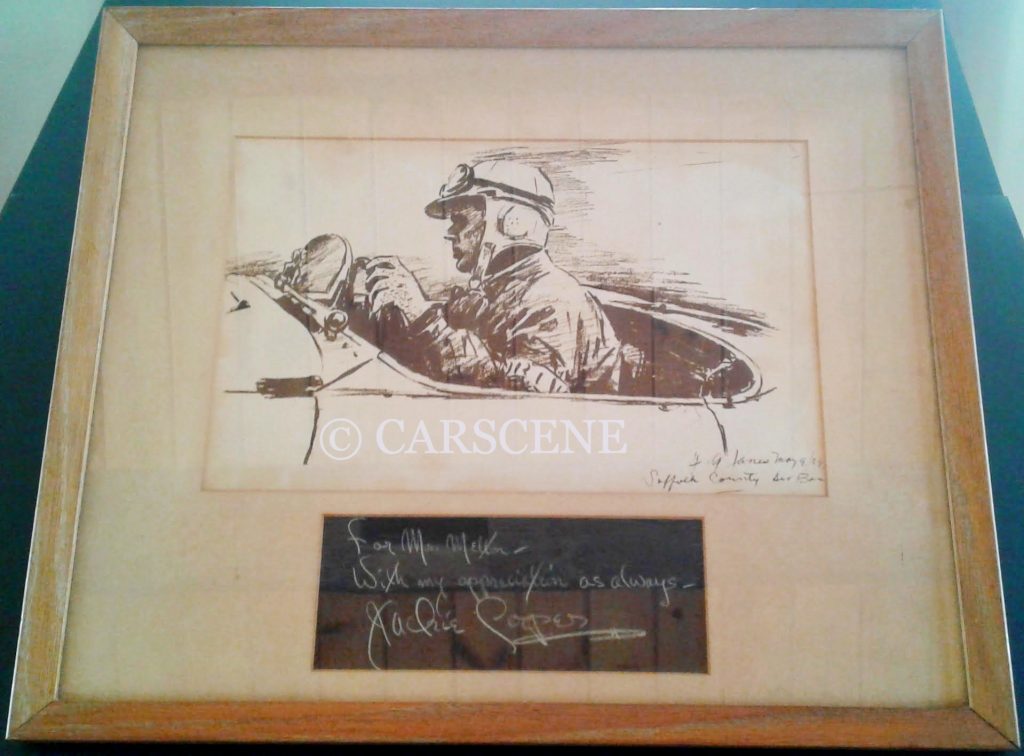 Jackie was great friends with Donald Healey and assisted in many Austin Healey sales promotion campaigns. For instance he was at Utah in 1956 with Donald’s attempt on improving the speed and endurance records he and his team had achieved in 1953 and ’54. He did the commentary on the BMC promotional film that was made at the time.