Sally Carrera re born for Charity

This article first appeared on the Forbes.com website and then republished on the RM Sotheby’s website where I saw it.

By Michael Harley a ‘Forbes’ Contributor.

Celebrating the 20th Anniversary of “Sally Carrera” – one of the stars of the animated film series, Cars – Porsche, Pixar, and RM Sotheby’s are collaborating to build a modern-day reincarnation of the famed 911 Porsche-bodied female lead. The fully functional vehicle will be auctioned at a future date to raise money for charities that help children.

Sally Carrera was based on a 2002 Porsche 911 (996-generation) created by a small team from Pixar led by Cars Production Designer Bob Pauley and Creative Director Jay Ward. For the film, the team at Pixar altered the iconic sports car and brought Sally to life by shortening the vehicle’s wheelbase, increasing the size of the windscreen, and simplifying the exterior (e.g., removing small accessories such as windshield wipers). In addition, Sally was given lifelike human eyes and a petite mouth, yet the instantly recognizable shape of the Porsche 911 was retained.

Two decades later, the team at Pixar is back at it. But this time, they have set their sights on the current 2022 Porsche 911 (992-generation). Working in conjunction with Style Porsche in Weissach, and Porsche Exclusive Manufaktur, in Zuffenhausen, Germany, the team will build one road legal, “Sally Carrera,” in metallic Sally Blue. The objective isn’t to create a clone of 996-based Sally but to incorporate what Sally would look like today. Once complete, the “Sally Blue Metallic” recreation will be auctioned off to raise money for children.

The collaboration has announced that proceeds from the auction will support life-changing programs for girls and young women through Girls Inc. and the USA for UNHCR, the UN Refugee Agency, to provide aid to children and their families affected by the conflict in Ukraine. 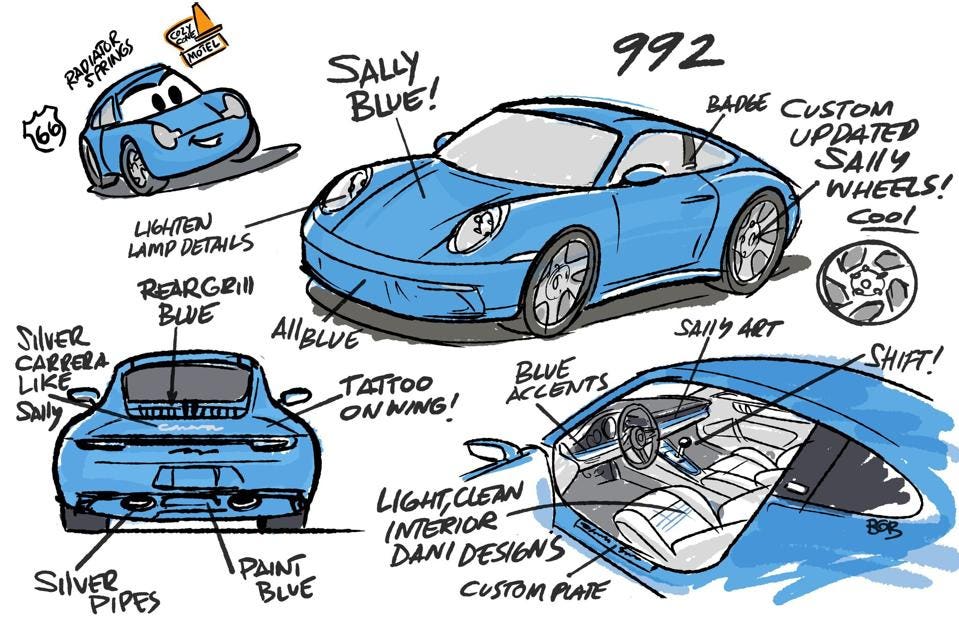 “We wanted to help, somehow, and as a team, we realized we could perhaps harness what we were working on to raise money. The whole project began with the premise that Sally’s character was devoted to helping others and it seems right that this should continue 20 years on,” explained Jay Ward, Creative Director of Franchise at Pixar Animation Studios. “We are, for the first time ever, going to build a brand new, street-legal Porsche 911 inspired by the special character we created – Sally Carrera. Only one will ever be made. It will be auctioned with all proceeds specifically aimed to help children, supporting education programs for young girls in the U.S. through Girls Inc. and refugee families fleeing Ukraine, predominately women, and children.”

The purpose of this webpage is to share an internet-sourced Classic Car related article. It refers to material that is in the Public Domain. Carsceneinternational.com has no commercial relationship with the author or publishers referred to. The information is reproduced in good faith and with the intention of promoting the awareness and interests of all parties.