The Association of Healey Owners caters for Owners and Enthusiasts of cars that were built by the Donald Healey Motor company, in Warwick, UK, between 1946 and 1954. These cars are also known as Warwick Healeys or pre-BMC/pre-Austin Healeys.

Just to remind you, those cars are –

The Silverstone model, designed to be a reasonably priced club racer, was launched in July 1949.

In recognition of that car’s seventieth anniversary members of the Association have decide to undertake a motoring tour taking in some historic locations associated with Donald Healey and his cars. At the same time taking the opportunity to say hello to members along the way. Members of the Healey Drivers Club are also welcome to join in at any stage of the tour.

Here is the itinerary – 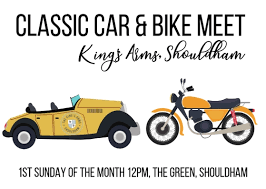 Drive the Norfolk Coast road stopping by the site of the Duncan factory and ending up in Maldon for dinner hosted by the Neil, Cass and Bob Collins – Post Code – CM9 4QE

Drive to Ramsgate with a lunch stop meeting with Eric Hall at the Three Blackbirds, Blendon Rd, Bexley DA5 1BX. Eric was one of the previous owners and accomplished racing driver of ETR775 an Elliott recently restored and on the tour. Dinner and an overnight stay in Ramsgate staying at the Pegwell bay Hotel, 81 Pegwell Rd, Ramsgate CT11 0NJ

Drive to the National trust home of Rudyard kipling, Batemans, Bateman’s Ln, Burwash, Etchingham TN19 7DS for lunch hosted by Bill Cakebread with a few other classic owners joining us.

Drive to Chalton Marshall for lunch hosted by Richard Bonham Christie at the Charlton Inn, Bournemouth Rd, Charlton Marshall, Blandford Forum DT11 9NH. Lunch is to be a buffet with a large number of local classic car owners joining us, including Roger Crouch with an extremely rare and pretty Alvis-Healey

Afternoon drive to stay in Exeter for dinner with local members, staying at the White Hart Inn, 66 South St, Exeter EX1 1EE. We will also be joined by members of the Healey Drivers Club

Morning drive to Perranporth and then onto the Healey Cyder factory for lunch.

Drive to Marlborough area for lunch at the Waggon and Horses, Beckhampton, Marlborough SN8 1QJ hosted by Basil & Marjorie Sykes.

Drive to Warwick and display cars in centre (approved permission of Warwick Council)  for a few hours before heading home.