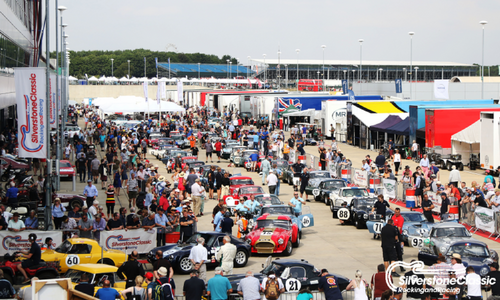 Building on the record-breaking success of its new August Bank Holiday date, The Classic will return to Silverstone over the same end-of-summer festival weekend in 2023 (25-27 August).

Tickets will go on sale later in the autumn and show-goers are invited to sign up for ticket alerts by clicking the link below.

The switch to the new August Bank Holiday date this year not only attracted a record public attendance but also widened the event’s appeal with more fun-fuelled family entertainment offered than even before.

As well as delivering the cream of historic motor sport spanning nearly a century of glorious track action, The Classic maximised its new date to provide a feast of extra entertainment for all ages with world exclusive displays, a crowd-pleasing Foodie Fest and live music on three nights topped by Rick Astley.

The proven popularity of the festival fixture  will now lay the foundations for an even bigger end of summer celebration for all the family in 2023.

75 the Anniversary of the Silverstone Race Circuit –  Introducing The 75th Anniversary Grand Prix Trophy for Front Engine GP Cars. That first race meeting back in 1948 was an International Grand Prix featuring all the sport’s top stars and fastest cars and, two years later, Silverstone had the further honour of hosting the very first round of the FIA World Championship for the newly inaugurated Formula One.

As ever the record-breaking displays of privately-owned classic cars and unrivalled line-up of retro races from all of motor racing’s golden eras will be right at the heart of The Classic event, with feverish qualifying sessions followed by a programme of spectacular showdowns across three packed days.

Featuring the cream of Europe’s finest historic racing grids, the races will be set on the famous Silverstone Grand Prix circuit, which will also continue to witness massive parades honouring key marque and model milestones.

As well as enhancing its global reputation as the epicentre of historic racing, in recent years The Classic has become a massive family attraction, providing entertainment for all generations to enjoy at the home of British motor racing.

While lovers of automotive nostalgia always revel in all the great competition and road cars from yesteryear, others immerse themselves in the off-track festivities – the vast majority included absolutely free in the price of admission.

Fun fair rides, crazy golf on the buzzing Village Green, dramatic stunt driving displays plus a massive shopping village are now very much part of the supplementary show at The Classic, as is the lure of live music from chart-topping bands.

With so much to enjoy, it is no surprise that record numbers are now turning The Classic into a fashionable ‘staycation’ and spending the entire weekend at Silverstone.

Clicking on this button will take you to a Silverstone Classic webpage.