Since becoming involved with the Warwickshire County Record Office’s Healey Motor Company Archive project, in 2016, I have become immersed in the fascinating story of how Cornishman, Donald Healey founded his eponymous car company in his adopted Warwickshire. In June 2021, I persuaded my wife that we should spend a few days in Cornwall, checking out all the sites, in that County, that I have read about during the past five years.

As you will read, we encountered a couple of disappointments but since arriving home and putting what I was able to see into context, I am absolutely delighted with what we did see and can record here.

Most Healey, Austin Healey and Jensen-Healey enthusiasts are very familiar with the story of how Donald Mitchell Healey, born in Perranporth, Cornwall, in 1898, became interested in cars, especially driving them, at a very early age. That interest was inspired and encouraged by his father, John Frederick, who was a member of Cornwall’s relatively small number of car owners in the early years of the twentieth century. His parents John Fredrick and Emma (nee Mitchell) allowed Donald to convert a storage shed next to their “Red House” general groceries store, Boscawen Road, Perranporth, into a garage/workshop.

However, before I race ahead of myself, let me share with you the trip’s itinerary and consequences –

As mentioned above I knew that the Healey story began in Perranporth, so, clearly, that popular seaside town was the first name on the list of places to visit. There was another, more recent, reason to visit Perranporth: the stained glass window installed in the town’s St. Michael’s Church of England Mission Church as a memorial to DMH. The window was paid for by the Donald M. Healey Memorial fund that had been established by North American Healey Clubs led by the Austin Healey Club of America. Donations had been and still are made to the Fund by members of Austin Healey Clubs around the world. Donald’s second son Brian (Bic) organised the design and installation of the window in conjunction with the Church authorities. Bic and his wife Mary lived on the outskirts of Perranporth so were well placed to undertake this work. We found St. Michael’s Church and I was able to take the photos shown below.

I knew that Donald’s parents had a grocery store in Perranporth: I had done some pre-trip research and discovered that the “Red House” store is now operated by the local Co-Operative Society. A Co-Op store was almost the first building we saw as we entered Perranporth and I convinced myself that this had been built on the site of the ‘Healey’ shop and therefore, took some photos. It is a good job that I walked up the main shopping street (Boscawen Road) where I discovered another Co-Op store, I took photos of that too. It was only when I returned home and did more research that I realised it was the second Co-Op encountered that now occupies the ‘Red House’. That name features in the store’s trading name. Incidentally, the store had been founded by Donald’s maternal grandfather, Sampson Mitchell and John Fredrick and Emma Healey, Donald’s parents, continued to run it after Sampson retired. 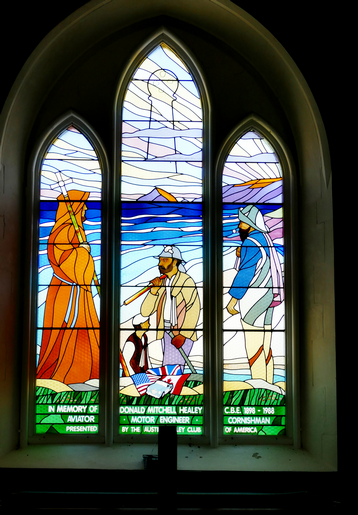 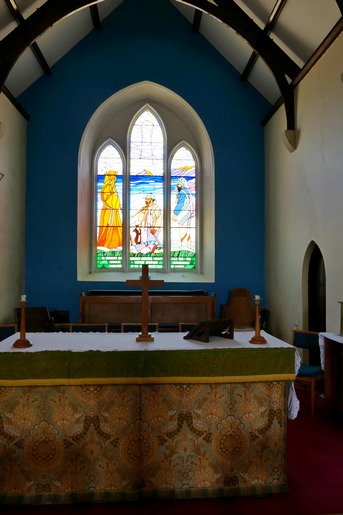 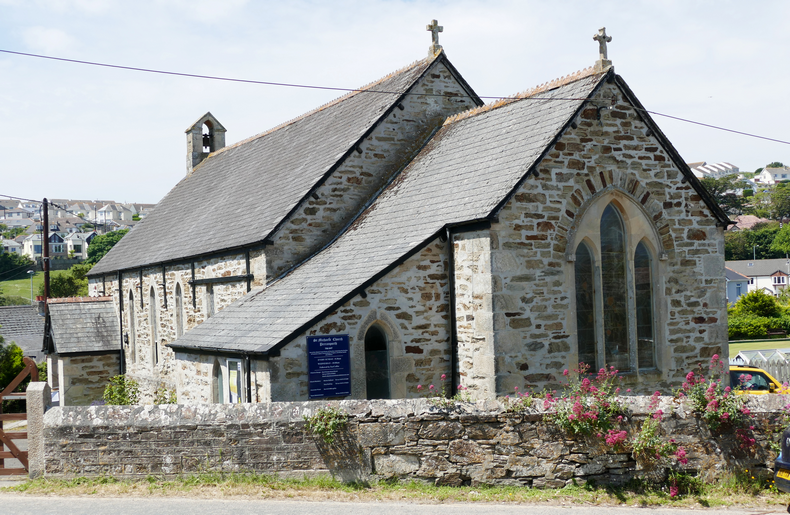 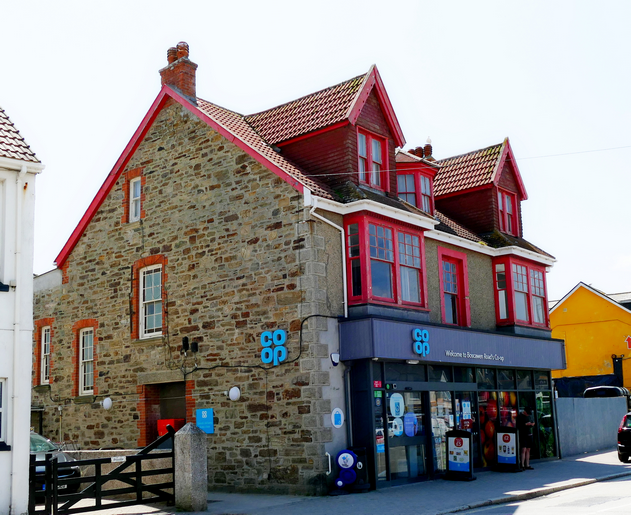 The “Red House” Perranporth, Cornwall, as it is today. The corrugated steel fence to the right of the shop is where Donald’s garage used to be. 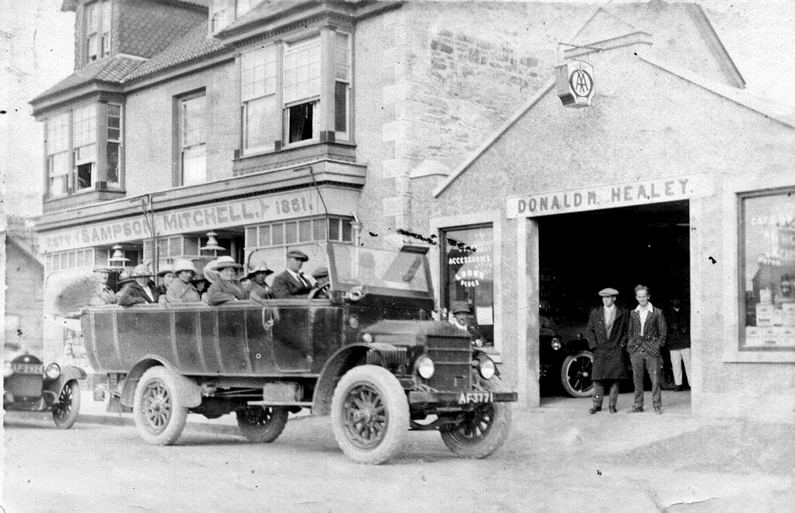 The ‘Red House’ (Sampson Mitchell store) With Donald Healey’s Garage next door, That’s Donald on the right in the doorway. It is highly likely that the Charabanc belonged to Donald too because he used to run Charabanc trips. Photo Credit – Perranazabuloe Museum. 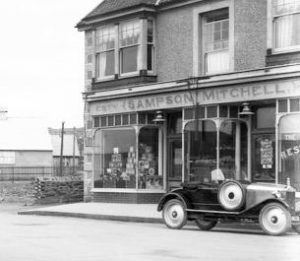 Sampson Mitchell’s “Red House” Store with Donald’s Buick Roadster outside. It was in this car that he had his first motorsport success – A speed Trial in 1922, organised by the nascent Truro Motor Club of which Donald was a founder member. Photo credit  – Royal Cornwall Museum. 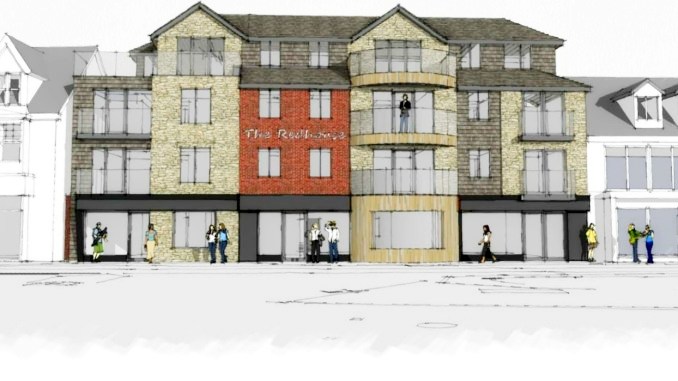 An artist’s impression of the recently approved redevelopment of the “Red House”, Perranporth, Cornwall. See reference to it in the Healeys Cyder Farm section below.

My renewed ** interest in Healey cars began with me watching a TV series in early 2013. The programme, presented by British actress Caroline Quentin, was called  “Cornwall with Caroline Quintin”. In it, she made several visits to the Healeys Cyder Farm and reference is made to the fact that the enterprise was started by David Healey, son of Donald’s third son, John. John, unlike his older brothers, Geoffrey and Brian, was not involved in his father’s motor company. In fact, in his early years, he and his wife Joy ran the family’s “Red House” store. John’s family still own the “Red House” and in 2019 obtained planning permission to redevelop the site into a multi story building with retail units on the ground floor and holiday flats on the upper levels. It was fortuitous that I chose to visit Perranporth this year because this historic building, as regards its Healey connections, will no longer exist next year.

Needless to say, we visited the Healey Cyder Farm which has been successfully developed into a tourist attraction. When we arrived, at just after 11.00 am., the main car park was already pretty full. I had picked up a Healey Cyder Farm information leaflet from our hotel; I was surprised to find no reference in the leaflet to the small collection of Healey and Austin Healey cars proudly featured on the Farm’s website. I thought that this omission was because the marketing people, who designed the leaflet, wanted to concentrate purely on what the visitor might see in terms of cider production and the products thereof. It didn’t cross my mind that I wasn’t going to see the cars, which, if I am honest, was the main purpose of our visit. In checking in at reception, I asked the young man “where can I see the cars?”. His reply was “I am sorry but the cars are not on display they have been put into storage as a response to Covid”. I was disappointed but on reflection, I was still pleased that we made that visit, if only to witness what a great success this branch of the Healey family is making of its chosen line of business.

**My first job, as a junior draughtsman, was with Jensen Motors, which, at the time, was making the painted and trimmed bodies for the Austin Healey 3000. In 1967 I bought a new Austin Healey Sprite Mk.IV. I only kept it for a couple of years before I went to the U.S. on a twelve month contract with Chevrolet. 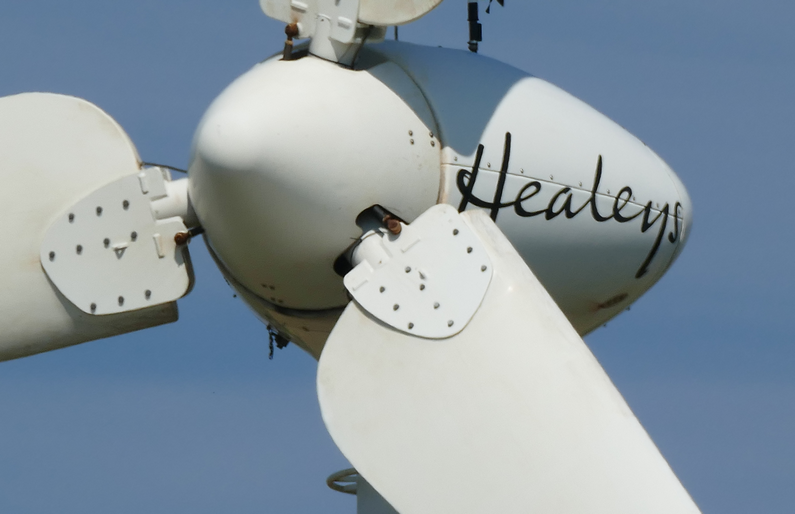 Healeys Cyder Farm’s Wind Turbine. I am sure that this would have pleased and amused Donald, given his own efforts to develop a portable wind-driven generator. 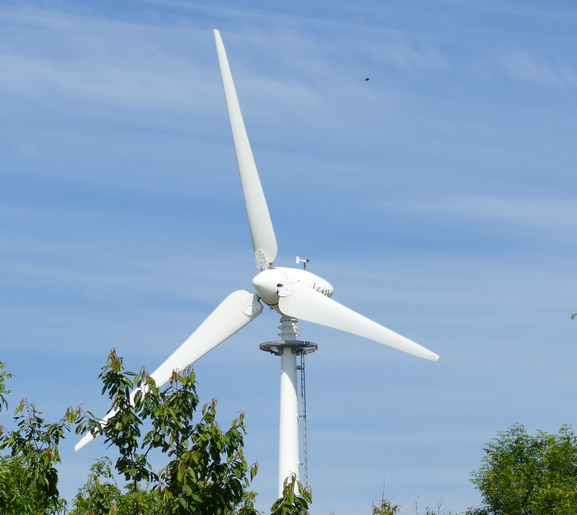 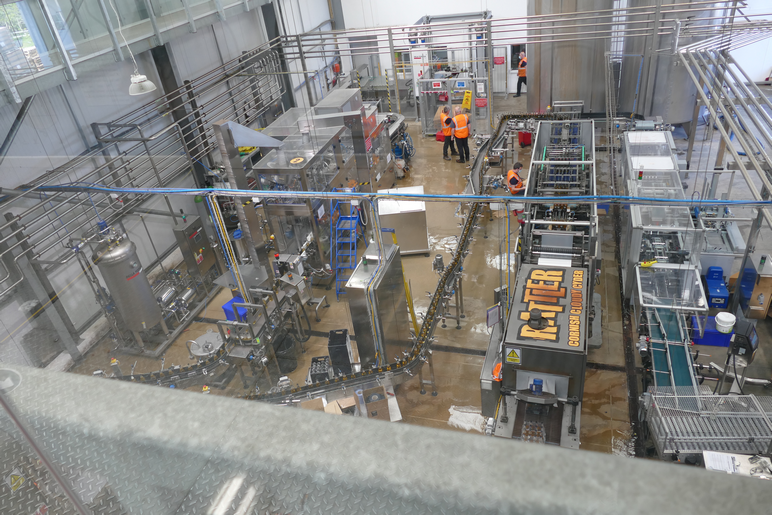 A Healey production line. But one for cider, not cars! 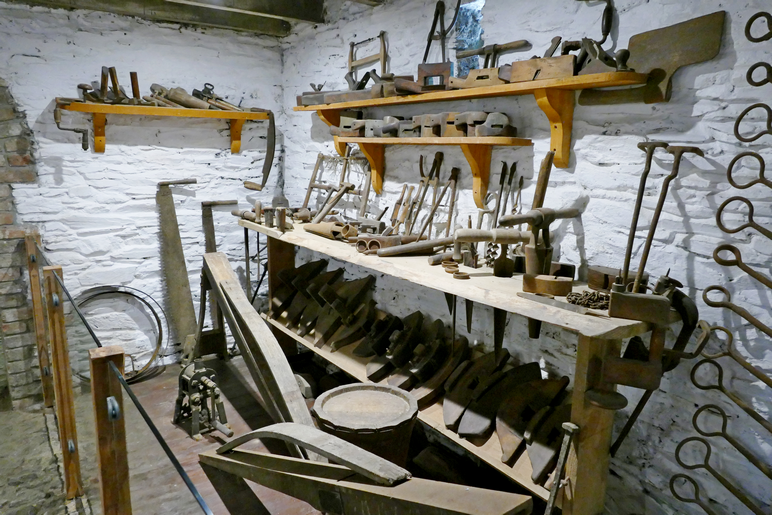 Healeys Cyder car collection as it was in 2019. Photographed by Ash Blagdon

Donald and Ivy bought Trebah House in 1963. It has 26 acres of gardens and a private beach (Polgwidden Cove) that leads onto the Helford River. They lived there for ten years during which time Donald put the outbuildings, near to the house, to good use. It was here that he and Roger Menadue, who had also moved back to Cornwall, worked on the prototype of what was to be known as the Austin Healey 4000. That car was fitted with a Rolls Royce FB 60 (3.9Ltrs.) engine, also used in the Austin Princess R. Other products of Donald’s active mind, during this period, were electric organs and wind-powered generators.

This quotation is taken from the Trebah Garden Trust website –

During World War Two, Head Gardener Robert Day and a reduced staff did little more than maintain the garden. The beach was concreted and the boathouse and rocks were dynamited to allow access for tanks. The garden was used as an ammunition store, and trenches dug in the lower part of the garden.

On 1 June 1944, a regiment of 7,500 men of the 29th US Infantry Division, along with their tanks, guns and transport, embarked from Trebah Beach in ten 150-foot flat-bottomed LST landing craft. For five days they battled through enormous seas to the Isle of Wight and then on to the D-Day assault landing on Omaha Beach in Normandy, where they suffered grievous casualties.

A memorial at the bottom of the garden commemorates the courage of these brave young American soldiers.

During his stay at Trebah Donald organised the removal of much of the concrete that had been laid down by the Americans. The concrete had been laid to support the tanks and armoured vehicles that were to be loaded onto the landing craft. He was able to fund this work with a grant from the War Department. He also built the existing boathouse with granite, which had been used as hardcore on the beach.

As we were in Cornwall it made sense to pay a visit to Trebah. I had always thought that Trebah was close to Perranporth on Cornwall’s north coast. In fact, it is 20 miles due south, on Cornwall’s south coast. In making that trip we encountered our second disappointment: We travelled on a Thursday only to discover that the gardens are closed on Thursdays and Fridays. It is only the gardens that are open to the public, the house is privately owned. As it happened, the disappointment was mitigated by the existence of the coastal path which runs past the bottom of Trebah Gardens and above the private beach. I took full advantage of that as you can see from the photographs shown below. 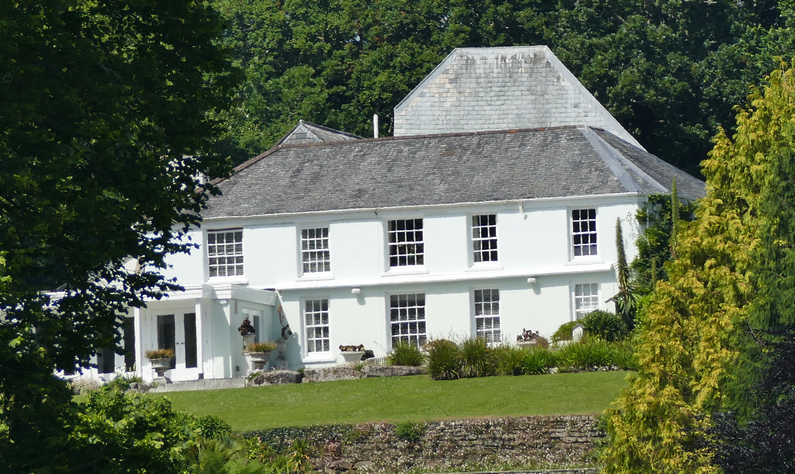 Trebah House from the ‘Coastal Path’ 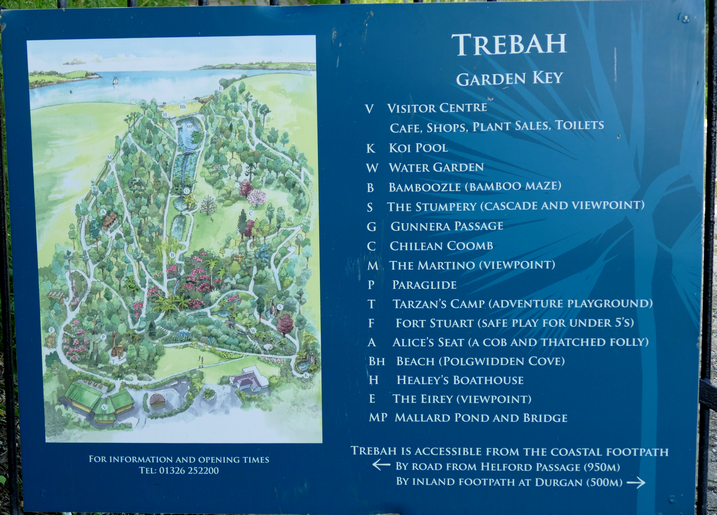 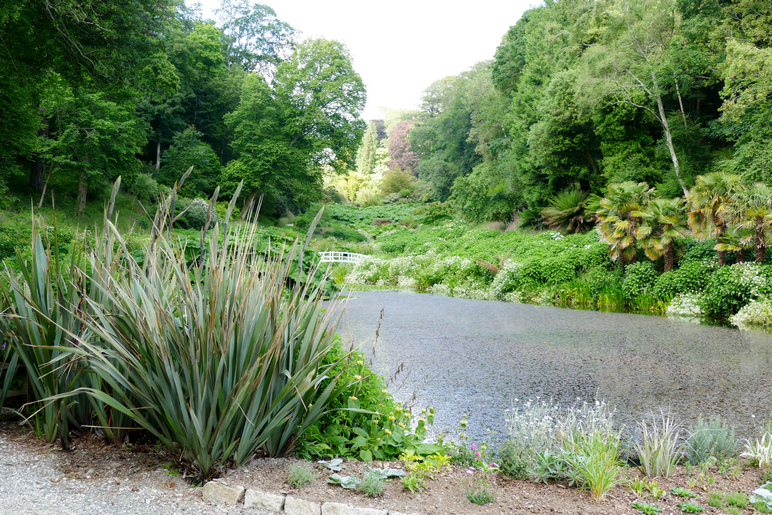 Mallard Pond at the bottom of Trebah Gardens 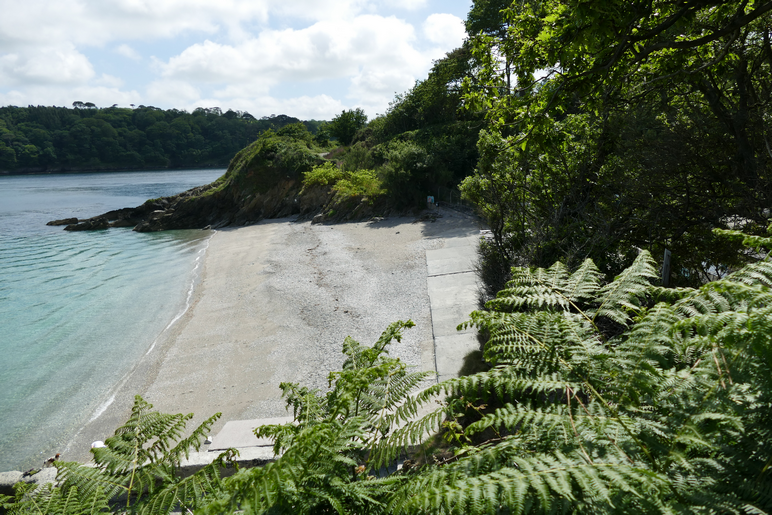 The beach at Polgwidden Cove. The remains of the WWII concrete slipway can be seen at the top of the beach. 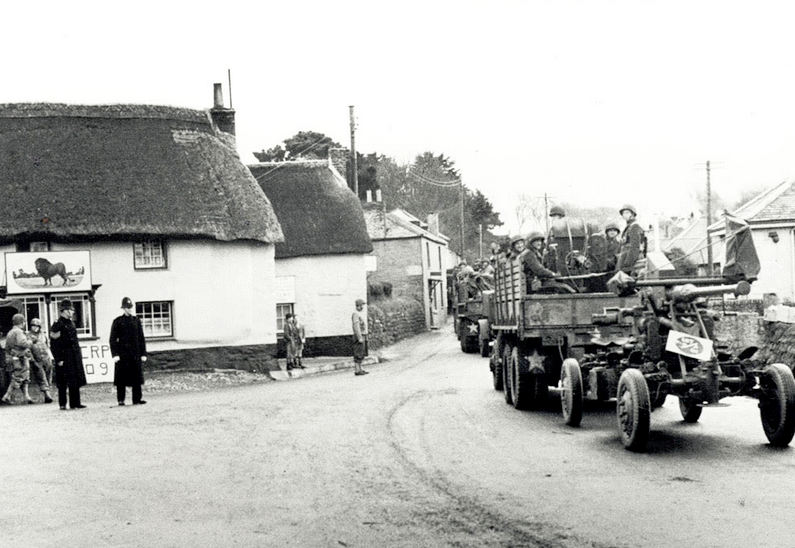 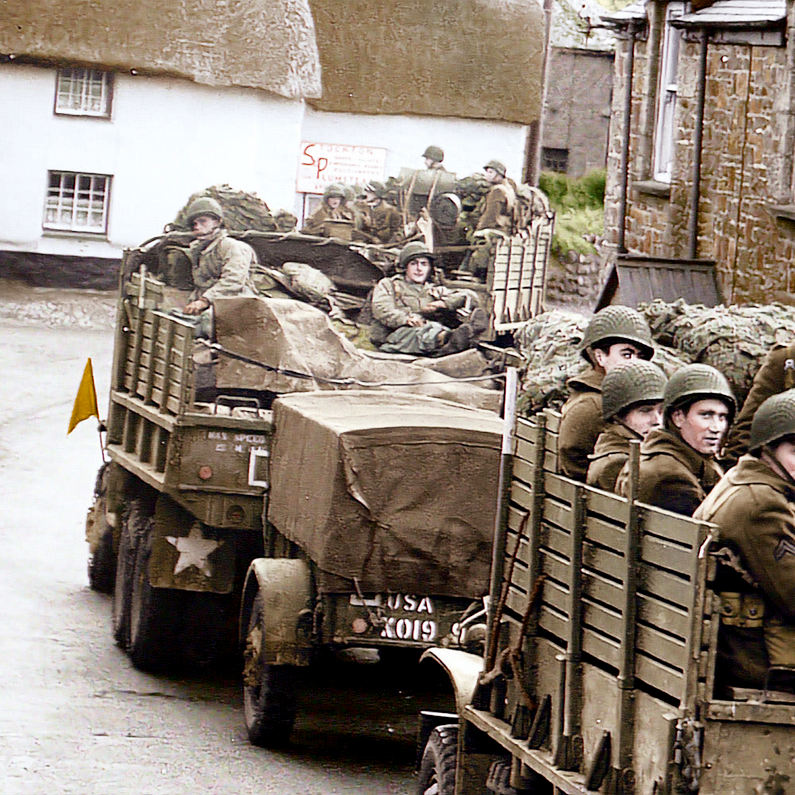 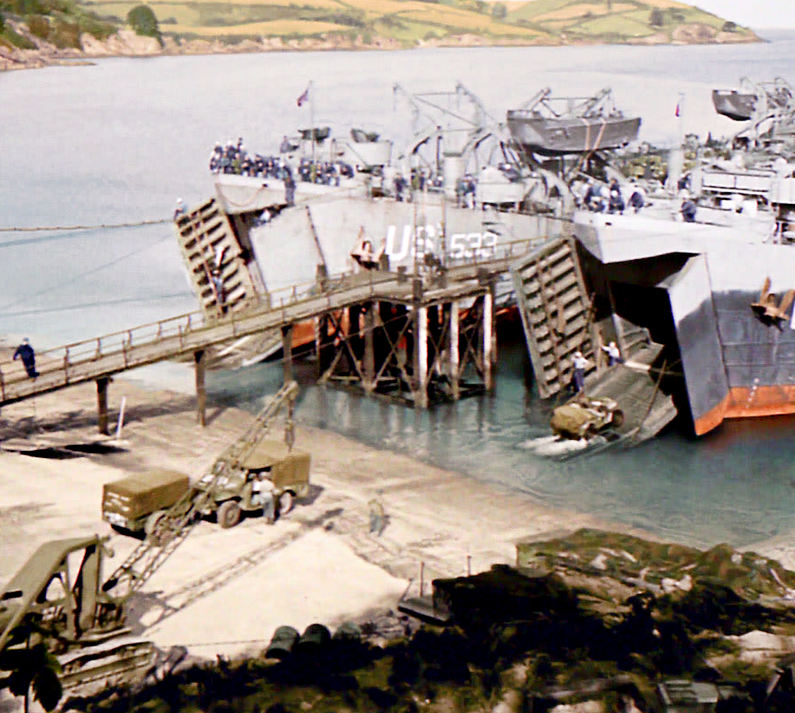 What a very interesting trip that was. In many respects, we only just skimmed the surface of the Cornish Healey story. A historian/Healey enthusiast could probably spend two weeks in Cornwall visiting all the sites we visited and more: most importantly visiting the various museums and libraries to unearth more photos and data featuring Donald and the Healey and Mitchell families. That historian/Healey enthusiast could be you! I hope that I have whetted your appetite. 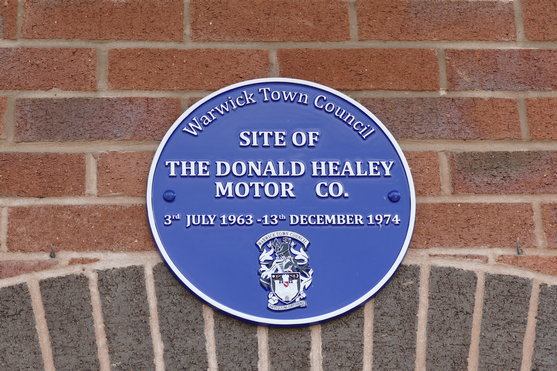 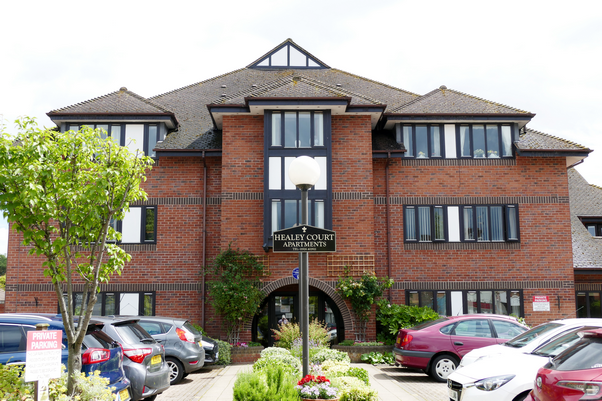 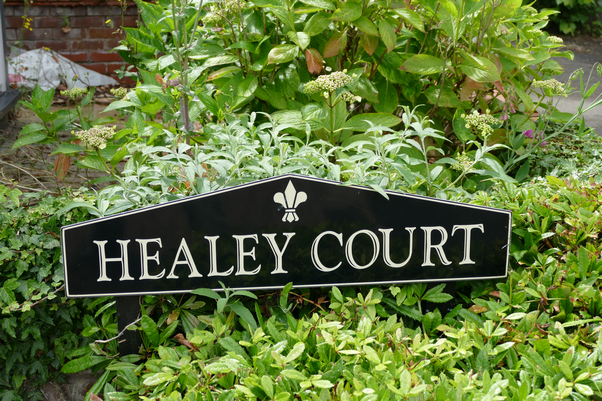 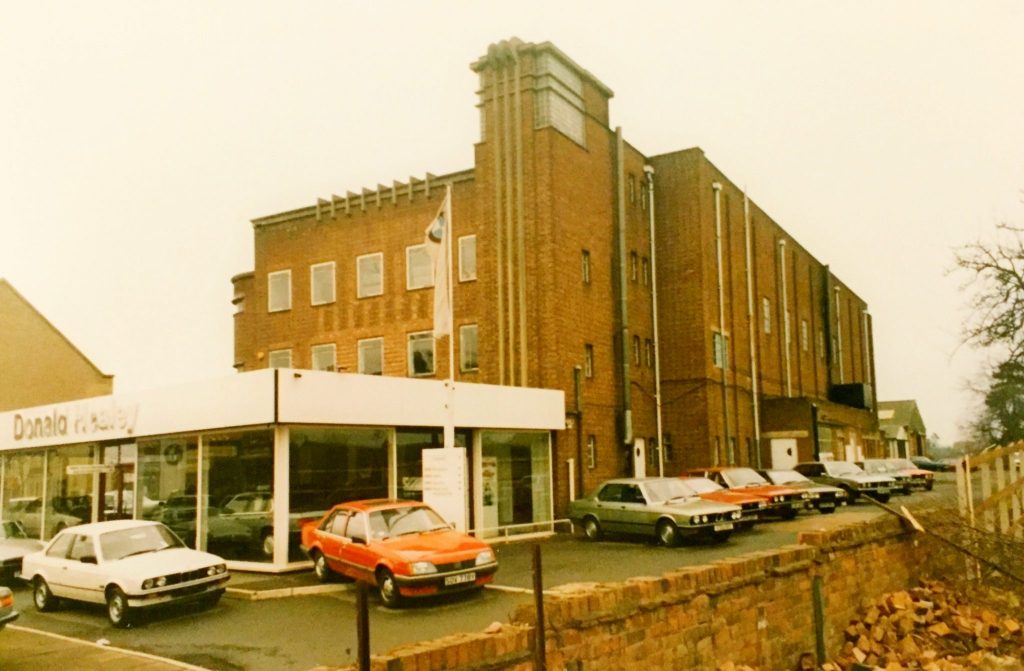 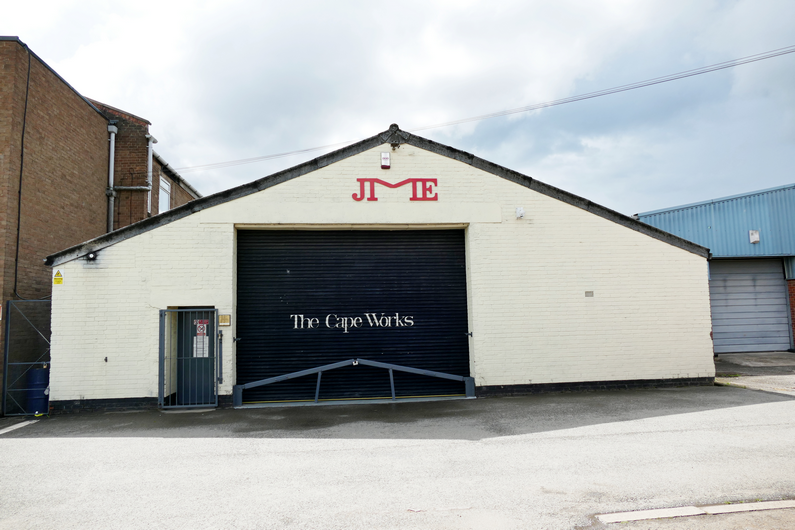 This is what remains of the old DHMCo. ‘Cape Works; now appropriately occupied by the well respected Austin Healey specialists, JME Healeys Ltd.

Please respect the sources of all the photographs featured in this article.

PS After publishing this article I received an email from David Moore, who, until last year, had owned an Austin Healey 3000 for 48 years! David told me that he and his wife often visit Cornwall and have been to some of the places mentioned in my article. They love Trebah in particular and have visited the Gardens several times. He sent me this photo of the Boathouse that DMH erected soon after acquiring Trebah House (you can see the date recorded above the door). David pointed out that the reason the boathouse was so important to Donald was that he used it when developing his own speed boats – 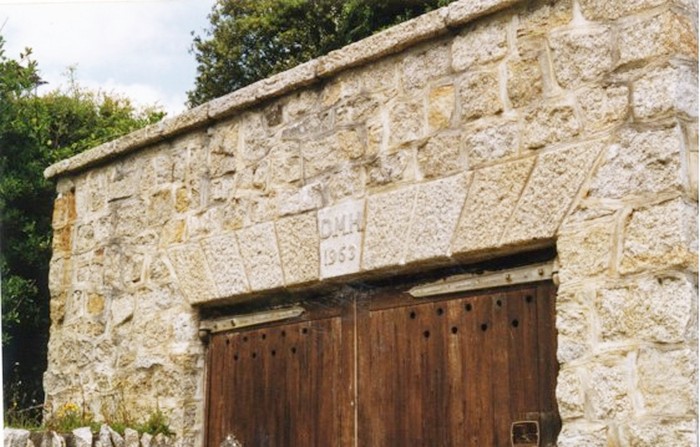