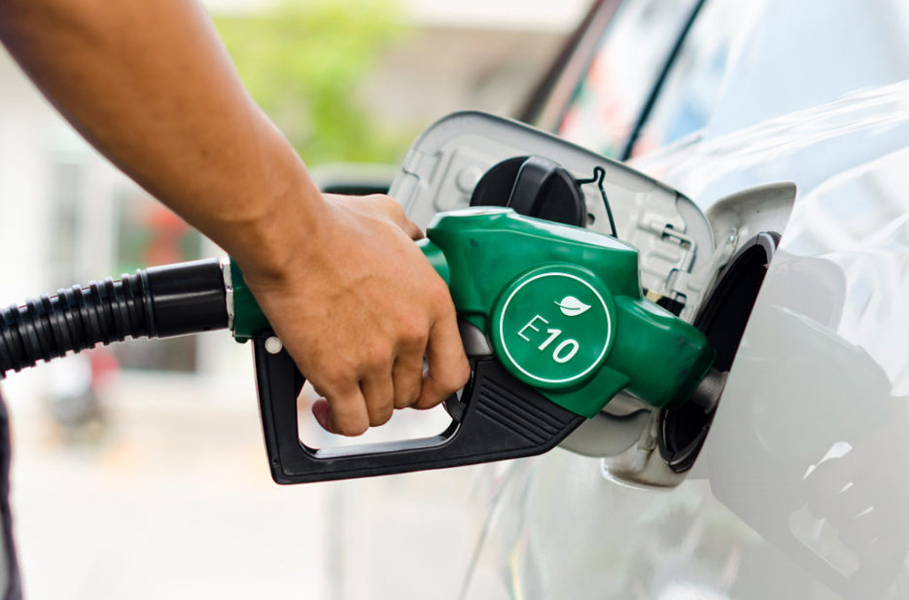 The Federation of British Historic Vehicle Clubs has published a useful guide regarding what the introduction of E10 fuel means to owners and users of petrol engined historic vehicles.

CSI is aware that a number of its readers fall into that category and is reproducing the guidance notes below. Although the article is aimed at a U.K. audience, in terms of Government legislation etc., the specific notes on the effects of using E10 fuel and what can be done to mitigate those effects, have a universal application. 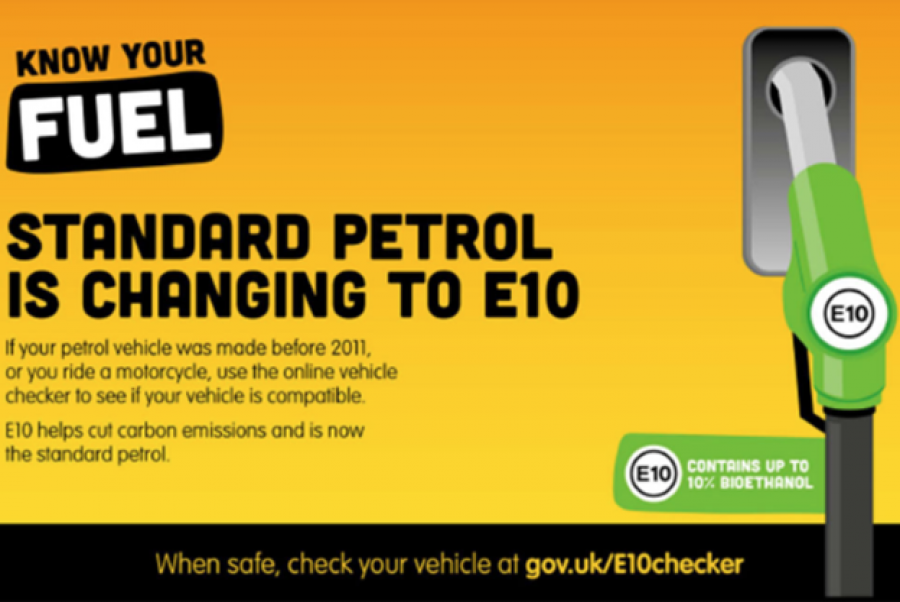 After an extensive consultation process, the Department for Transport has introduced legislation to mandate E10 petrol as the standard 95-octane petrol grade from 1 September 2021 and in Northern Ireland, this will happen in early 2022. They will also require the higher-octane 97+ ‘Super’ grades to remain E5 to provide protection for owners of older vehicles. This product will be designated as the ‘Protection’ grade. The change in fuel applies to petrol only. Diesel fuel will not be changing.

Petrol pumps now show new labels designating the grade, the maximum ethanol content and an advisory cautionary notice.  Other information regarding the introduction of E10 petrol may also be provided by fuel retailers such as the ‘Know your Fuel’ sticker (shown at the foot of this article).

For some time, service station pumps have had E5 and B7 labels consistent with the BS EN16942 standard that has been adopted across Europe. This standard also sets out the labelling requirements for other renewable fuel grades such as E85, B20, B30, etc. that can be found across Europe either on service station forecourts or for captive fleet use.

At the filling station

At the petrol station, a circular ‘E10’ or ‘E5’ label will be clearly visible on both the petrol dispenser and nozzle, making it easy for you to identify the correct petrol to use together with the warning text “Suitable for most petrol vehicles: check before use” 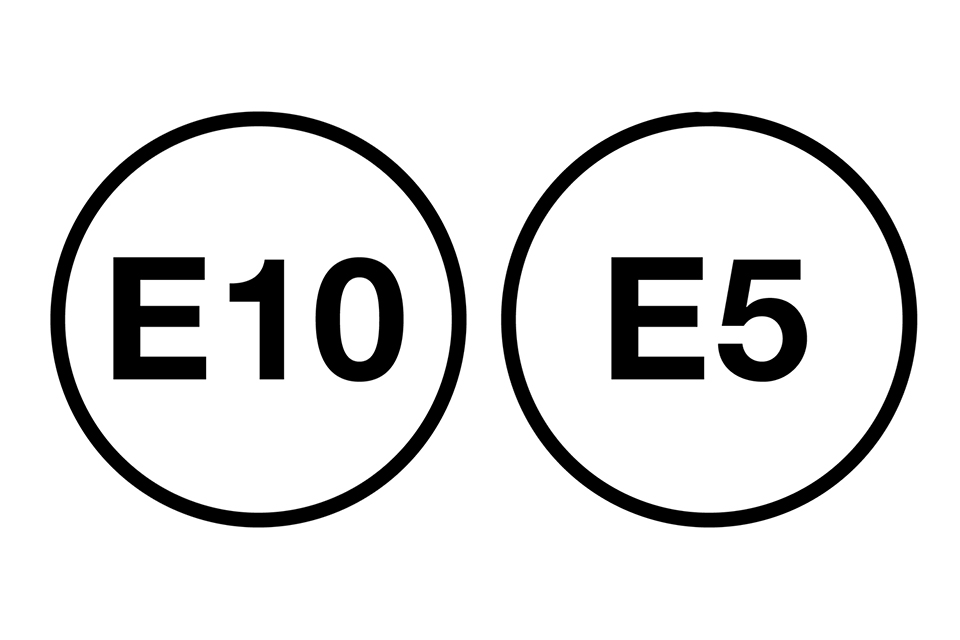 New vehicles manufactured from 2019 onwards should have an ‘E10’ and ‘E5’ label close to the filler cap showing the fuel(s) they can use.

What fuel should I use?

Almost all (95%) petrol-powered vehicles on the road today can use E10 petrol and all cars built since 2011 were required to be compatible.

If your petrol vehicle or equipment is not compatible with E10 fuel, you will still be able to use E5 by purchasing the ‘super’ grade (97+ octane) petrol from most filling stations.

The Federation recommends that all vehicles produced before 2000 and some vehicles from the early 2000s that are considered non-compatible with E10 – should use the Super E5 Protection grade where the Ethanol content is limited to a maximum of 5%.

To check compatibility of vehicles produced since 2000, we recommend using the new online E10 compatibility checker: https://www.gov.uk/check-vehicle-e10-petrol however, please note that many manufacturers are missing and there are some discrepancies regarding particular models.

Additional information on vehicle compatibility issues is available on the FBHVC website https://fbhvc.co.uk/fuels.

Ethanol is an alcohol derived from plants, including sugar beet and wheat. Increasingly, waste products such as wood are also being used to manufacture ethanol. Therefore, it is renewable and not derived from fossil fuels.

Why are we using it?

Principally ethanol is being added to fuel in order to reduce carbon emissions as Britain heads towards its target of net zero emissions by 2050. According to Government experts, this will reduce greenhouse gases by 750,000 tonnes per year which, they say, is the equivalent output of 350,000 cars.  The move will bring the UK in line with many European countries which have been using E10 fuels for a number of years already. In some parts of the world, such as South America much higher levels of bioethanol have been in use since as early as the 1970s.

Some historic vehicles use materials in the fuel systems that are damaged by ethanol. These include some cork, shellac, epoxy resins, nylon, polyurethane and glass-fibre reinforced polyesters. In later cars these have largely been replaced with paper gaskets, Teflon, polyethylene and polypropylene which are all unaffected by ethanol. Very old leather gaskets and seals are also resistant to ethanol.

As the ethanol molecule is smaller and more polar than conventional petrol components, there is a lower energy barrier for ethanol to diffuse into elastomer materials. When exposed to petrol/ethanol blends these materials will swell and soften, resulting in a weakening of the elastomer structure. On drying out they can shrink and crack resulting in fuel leaks.

If your fuel system has old hoses or any degradation of components, then ethanol may appear to advance these problems very quickly. You may experience leaks or fuel “sweating” from fuel lines. Some fuel tank repair coatings have been found to breakdown and clog fuel systems, although there are plenty of ethanol resistant products on the market.

What can we do?

The most important thing is to ensure your fuel system components are regularly inspected and renewed as part of a routine maintenance programme for your historic vehicles. Ultimately owners should look to renew fuel system components such as hoses, seals and gaskets with ethanol safe versions as a long – term solution and more of these are entering the market through specialists every day.

If you should decide to make the necessary vehicle fuel system modifications together with the addition of an aftermarket additive to operate your classic or historic vehicle on E10 petrol. The FBHVC strongly recommends that you regularly check the condition of the vehicle fuel system for elastomer and gasket material deterioration and metallic components such as fuel tanks, fuel lines and carburettors for corrosion. Some plastic components such as carburettor floats and fuel filter housings may be become discoloured over time. Plastic carburettor float buoyancy can also be affected by ethanol and carburettors should be checked to ensure that float levels are not adversely affected causing flooding and fuel leaks.

Ethanol is a good solvent and can remove historic fuel system deposits from fuel tanks and lines and it is advisable to check fuel filters regularly after the switch to E10 petrol as they may become blocked or restricted. If your vehicle is to be laid up for an extended period of time, it is recommended that the E10 petrol be replaced with ethanol free petrol which is available from some fuel suppliers. Do not leave fuel systems dry when storing, as this can result corrosion and the shrinking and cracking of elastomers and gaskets as they dry out.

Ethanol contains approximately 35% oxygen by weight and will therefore result in fuel mixture enleanment when blended into petrol. Petrol containing 10% ethanol for example, would result in a mixture-leaning effect equivalent to approximately 2.6%, which may be felt as a power loss, driveability issues (hesitations, flat spots, stalling), but also could contribute to slightly hotter running. Adjusting mixture strength (enrichment) to counter this problem is advised to maintain performance, driveability and protect the engine from overheating and knock at high loads.

Modern 3-way catalyst equipped vehicles do not require mixture adjustment to operate on E10 petrol because they are equipped with oxygen (lambda) sensors that detect lean operation and the engine management system automatically corrects the fuel mixture for optimum catalyst and vehicle operation.

Ethanol has increased acidity, conductivity and inorganic chloride content when compared to conventional petrol which is typically pH neutral. Ethanol can cause corrosion and tarnishing of metal components under certain conditions. These characteristics are controlled in the ethanol used to blend E5 and E10 European and UK petrol by the ethanol fuel specification BS EN15376 in order to help limit corrosion.

Some aftermarket ethanol compatibility additives claim complete protection for operating historic and classic vehicles on E10 petrol. The FBHVC is not aware of, or has tested any additives that claim complete fuel system protection with respect to elastomer and gasket materials for use with E10 petrol. The FBHVC therefore recommends that elastomer and gasket materials are replaced with ethanol compatible materials before operation on E10 petrol.

What happens if I fill up with E10 by accident?

Don’t panic – your car will continue to run, just fill up with E5 at the next opportunity and avoid storing your vehicle for long periods with E10 fuel.

E5 petrol can contain between 0 and 5% by volume ethanol. Other oxygenated blend components may also be used up to a maximum petrol oxygen content of 2.7%. There is a variation at the pumps, not just between brands but also between different areas of the country, some will contain a lot less but the absolute maximum is capped at 5%.

E10 petrol contains between 5.5 – 10% ethanol by volume. Other oxygenated blend components may also be used up to a maximum petrol oxygen content of 3.7%. Again, there is a variation at the pumps, not just between brands but also between different areas of the country, some will contain a lot less but the absolute maximum is capped at 10%.

It should be noted that some Super E5 Protection grade fuels do not contain Ethanol as the E5 designation is for fuels containing up to 5% Ethanol.  To re-iterate, product availability varies by manufacturer and geographical location.

The renewable content of diesel fuel will not be changing and service station fuel pumps will continue to be labelled as B7, designating a biodiesel, Fatty Acid Methyl Ester (FAME) content of between 0 and 7% by volume. New vehicles manufactured from 2019 onwards should have a ‘B7’ and or higher content label close to the filler cap showing the fuel they can use.

The purpose of this webpage is to share information produced by the FBHVC on E10 fuel. It refers to material that is in the Public Domain. Carsceneinternational.com (CSI) has no commercial relationship with the FBHVC or any of its supporters or sponsors. CSI is not responsible for the content of the FBHVC article reproduced on this webpage.