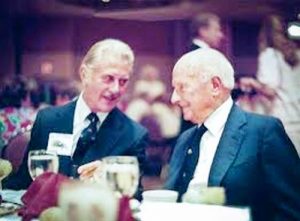 In tribute to Gerry Coker

Many CarScene posts since 2017 have been dedicated to the history of the Donald Healey Motor Co., Warwick, England and the wonderful products that were produced by that company. The reason for those posts was because I became a volunteer with the Warwickshire County Record Office’s Healey Motor Company Archive project in 2016. One of my contributions to that project was to write a series of blogs aimed at bringing the contents of the archive to the attention of Healey enthusiasts around the World.

My first direct contact with the Austin Healey 100 > 3000 (“Big Healey”) was when I started my first job as a junior draughtsman in the Body Drawing Office at the Jensen Motors factory in Carters Green, West Bromwich, 1959. As I have said before, although Jensen was involved with other contracts, at that time, not the least being the Volvo P1000 sports coupe, Gerry Coker’s “Big Healey” layout drawing, on one of the vertical drafting boards, still dominated the drawing office. At the same time, I fell in love with the recently introduced Austin Healey Sprite, I resolved to have one when my finances allowed. Gerry had also penned the design for that car, before it was later adorned with its beloved Frog/Bug Eye headlights and before he left Healey to pursue his career in the States.

In all honesty, I only became fully aware of Healey’s history when I started working with the WCRO’s Healey Archive. One of the first things I learnt was that it was a young  Gerry Coker who first penned the body design for what was intended to be the Healey 100 sports car, aimed at the lucrative American car market. The more I read about and watched videos of Gerry, the more I identified with him, we had very similar backgrounds. I too used to sketch cars on the back of the proverbial envelope (literally!) when I was a youngster and knew that I wanted to be a “car designer” when I started work. Clearly, I didn’t have Gerry’s talent and my career in the motor industry took a different direction.

But that identification with my fellow Englishman, who, with his wife Marion, spent the greater part of his life in the U.S., stayed with me and I avidly read any snippet of information concerning him that I came across, in magazines, or, on the internet.

Sadly, the last time I saw his name in print was today when I saw Reid Trummel’s post on the Austin Healey section of the British Car Forum website, notifying readers of Gerry’s passing.

On behalf of myself and all involved with the WCRO Healey Motor Company Archive, I wanted to pay tribute to Gerry Coker’s life and the major contribution that he made to automotive design.

This excellent interview conducted at the Austin-Healey Club of America Conclave in 1979, is, in my opinion, the best tribute I can pay at this time to a life well lived. Truly the end of an era!