Donald Healey founded his eponymous motor company in Warwick in 1945. This exhibition provides an opportunity to celebrate the great man and his cars. 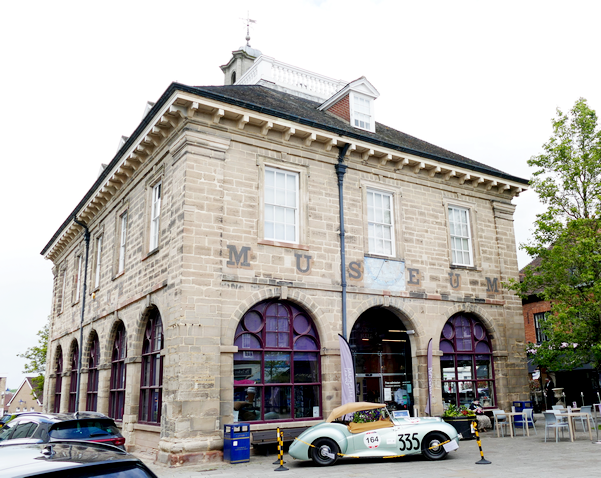 A day that will be etched into my memory forever because of all the eminent people, with Healey or general automotive connections, who were gathered together under one roof. And what a roof, none other than the Warwick Market Hall Museum. The  Market Hall, built of sandstone in the late 17th century, during the reign of Charles II, was rented to tradesmen in its early days. There was a small prison located in the building. Markets were held here until 1905, after which the whole building became a museum. We are talking serious history here ladies and gentlemen, boys and girls! With this Exhibition, history is the name of the game, automotive history created in the wondrously historic town of Warwick. A town where knights mounted on shire horses can be seen tilting at the jousts in nearby Warwick Castle.

I am confident that had Donald Healey been born in the 14th – 15th Centuries he would have been one of those Jousters, possibly riding a trusty steed on the field at Agincourt. After all, he was enlisted in the King’s Service in both the First and Second World Wars! However, in peacetime, his preferred form of transport was motor cars, the faster the better. He was so besotted with this form of transport that he formed the ambition of creating his own company to build cars of his design. He came from Cornwall to Warwickshire, before WWII, to work for the Triumph Motor Company in Coventry. During the war he worked for Humber, also located in Coventry, designing military vehicles. It was here that, with fellow employees, Archille “Sammy” Sampietro and Ben Bowden, the first Healey car was conceived. A site was found at ‘The Cape’, Warwick where work building what was to become the Healey Westland began. What a very rich story of derring-do ensued, written on the roads and race tracks of Continental Europe; most notably, in Italy, on the Mille Miglia, France, Austria, Italy, Germany and Switzerland in the “Coupe Des Alpes”. France and Italy in the Leige-Rome-Liege Rally. The Le Mans 24 Hour race, Sebring and Nasau. Healey and Austin Healey, together with their respective drivers, writ large in the annuls of motorsport.

So, that is what the “Healey: Cars for Speed and Glamour” exhibition is all about, celebrating Donald’s achievements in the Town that spawned them. What could be more appropriate?

It is important to point out that the Exhibition is based upon the contents of the Donald Motor Company Archive purchased by the Warwickshire County Record Office (WCRO) from Geoff Healey’s family in 2016.

So why did the Launch Day have so much resonance for me? Simply one word – people. The day was split into allocated time slots, I and my two companions, Andy Bye of the Rootes Archive Trust (RACT) and the Federation of British Historic Vehicle Clubs (FHVC) and Ulric Woodhams, owner and curator of the Jensen Museum, Church Stretton, Salop., had elected for the 12.30 – 2.30 pm slot. To my great delight so had Peter Healey, Brian (Bic) Healey’s son and his son Tim, I had a great chat with them both. Other notables were Barrie Wills, author of “John Z, the Delorean & Me: Tales from an Insider” and Keith Bates, CEO of ‘A-Head 4 Healeys’ the Healey spares specialists. Also there but in general attendance, not confined to a specific time slot, was Warren Kennedy, owner of “Classic Restorations” and the “Healey Collection”, a collection of more than thirty Healey cars, mostly “pre Austin”. Warren has been a stalwart supporter of the WCRO’s Healey Archive, always willing to provide cars from his collection for display purposes. This Exhibition was a case in point, on display outside the Museum were a Healey Westland and the Nash Healey X5 sports race car, of Le Mans fame, see photos below.

Matt Western, Warwick’s Member of Parliament and a former colleague of mine at Peugeot, was in the group before me and David Matthews, author of a number of Healey related books but most notably, “From Gullwing to Spyder – The Last Healey at Le Mans”, was in the group after me. Also in David’s group were some former Healey employees, my hat off to you sirs!

It is worth mentioning another man that I had a long chat with – David Harris. David, a friend of Barrie Wills, has been a long time supporter of the Healey Archive. But that is not what we were talking about. I first met David at the Retro Warwick Classic Car Show in 2019. He told me then that he was in possession of Ralph Broad‘s memorabilia and archives. That meant a lot to me because in the 1960s to 1980s I used to admire the success of Ralph’s team, “Broadspeed”, in racing Minis and Ford Anglia 105Es. David’s challenge is to find a suitable home for this collection. He thinks that he may have found a logical one at the British Motor Museum, Gaydon, Warwickshire. The reason why I have gone into this detail is to encourage anyone who knows of, or, is in possession of any material associated with Ralph Broad or Broadspeed to please get in touch – info@carsceneinternational.com

All the above mentioned people are just the ones that I was aware of, I am sure that there were many more, notable people, in attendance on the day.

I would like to pay tribute to all those WCC employees who made such a great effort to mount this exhibition. I know, personally, of the blood sweat and if not tears then certainly, at times, the anguish that was spent and experienced. Also to say thanks to those who made us so welcome on the day. Not featured here but worthy of an honorable mention, is Richard Lewis, Collections and Development manager. On the day he was just a blur making sure that covid rules were being adhered to by wiping every conceivable surface etc. It was good to meet you Richard.

I am sure that you appreciate that this post isn’t intended to be an end in its self, it is just a taster, to encourage those who can to visit the exhibition in person. 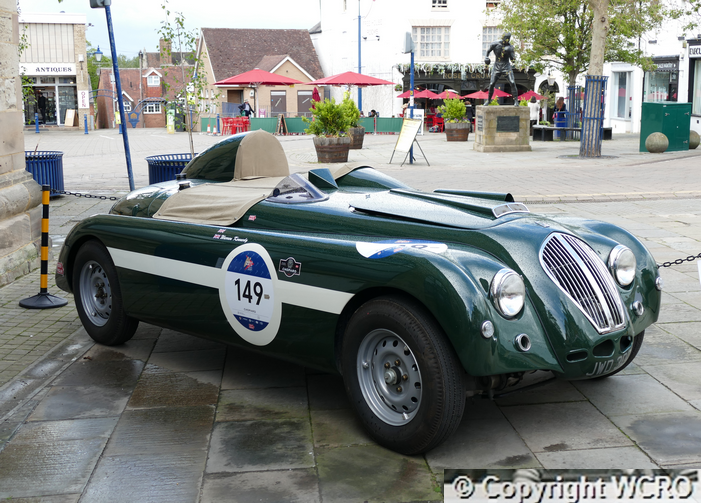 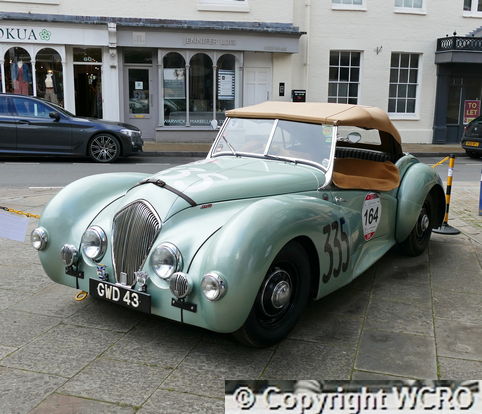 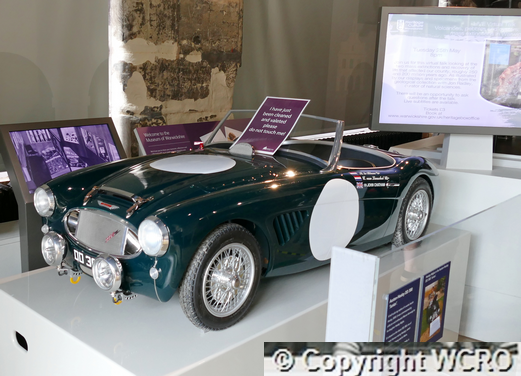 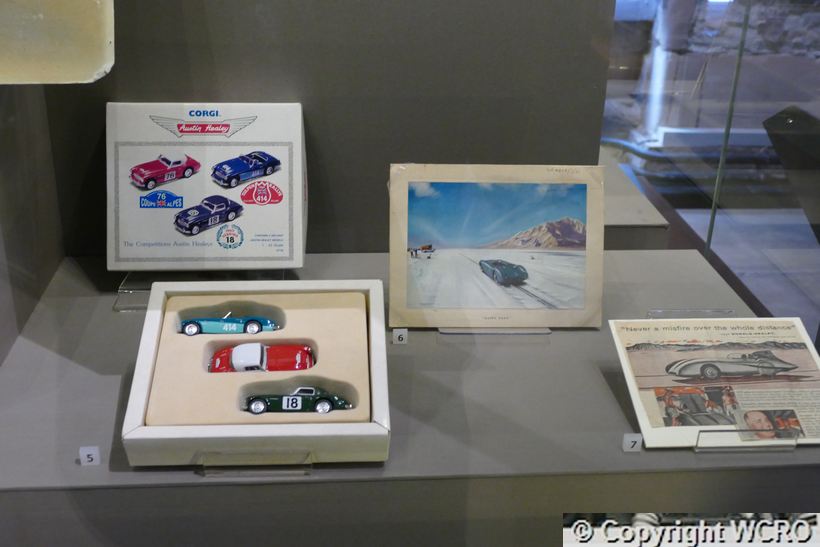 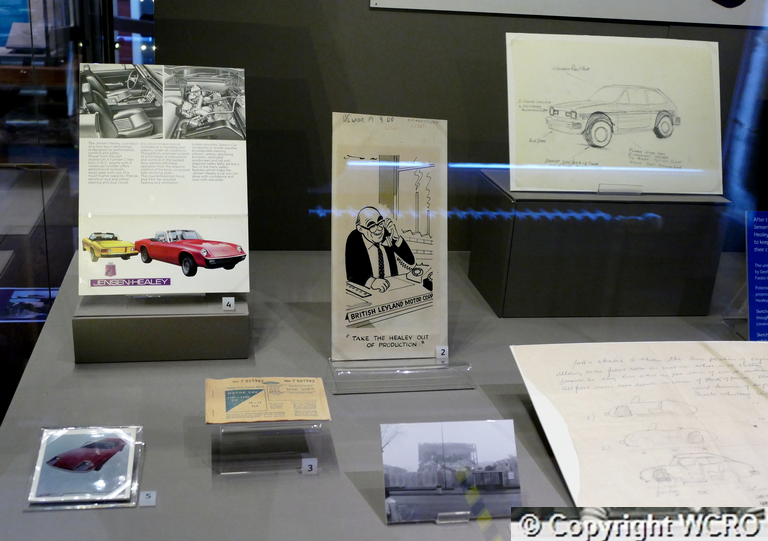 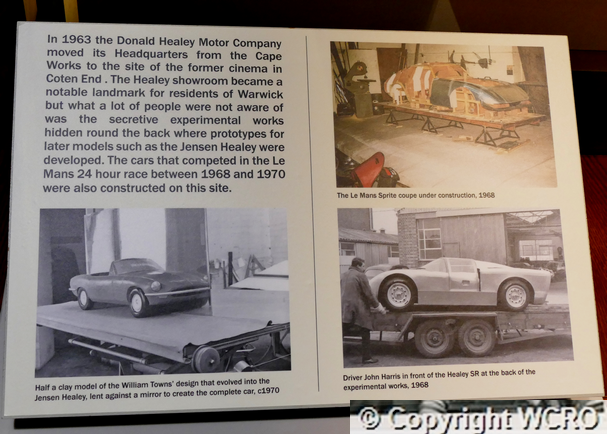 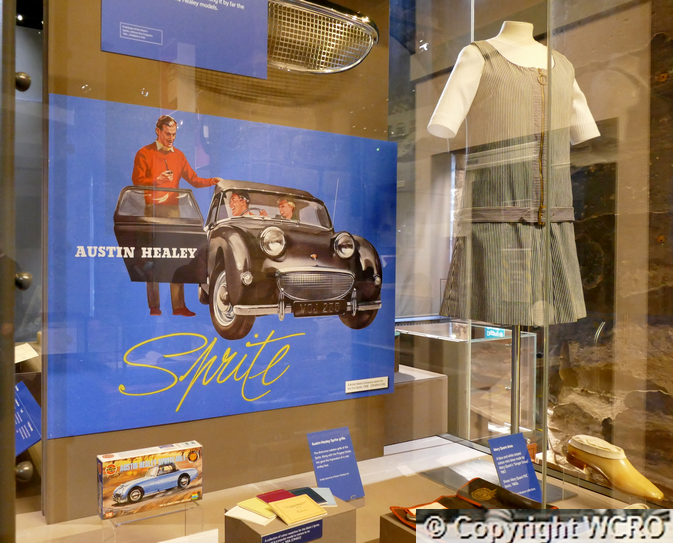 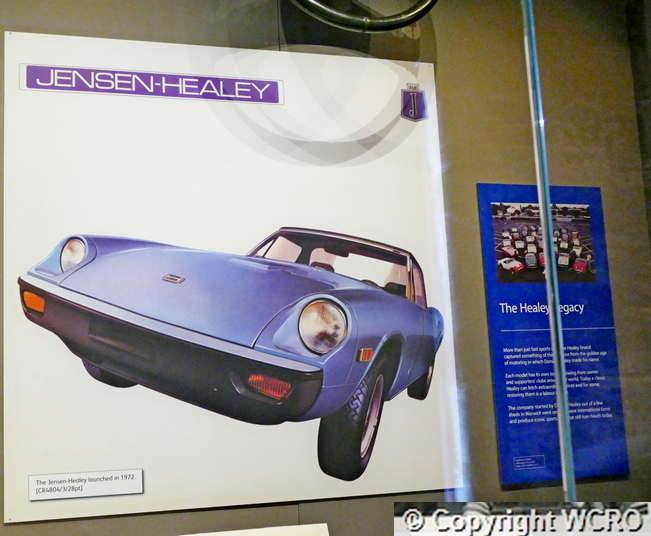 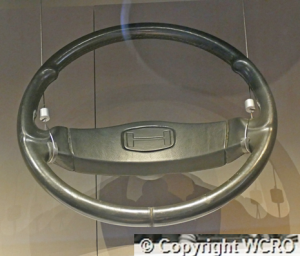 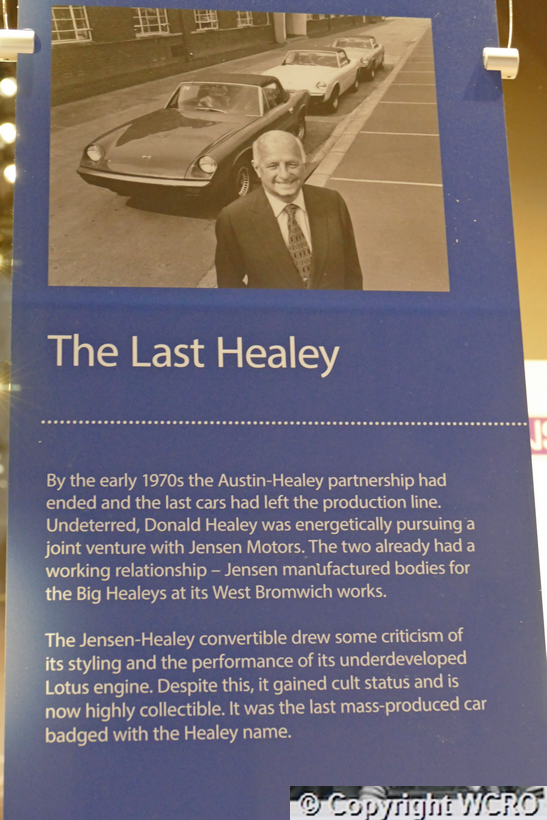 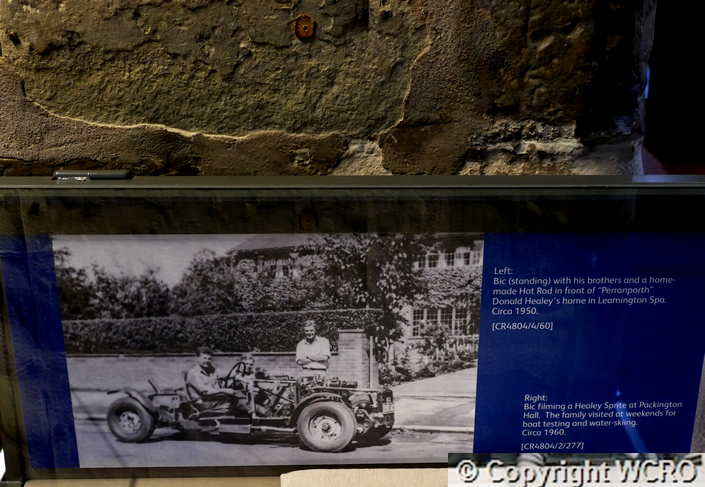 I could have cropped this photo to eliminate the Museum wall but I thought that it provides an excellent example of the juxtaposition of the different ages interacting. 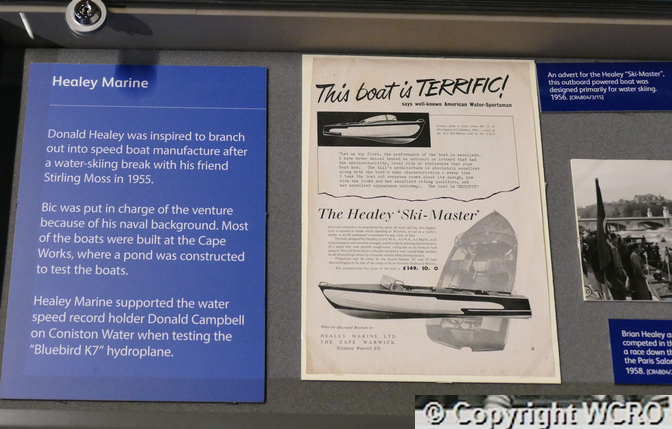 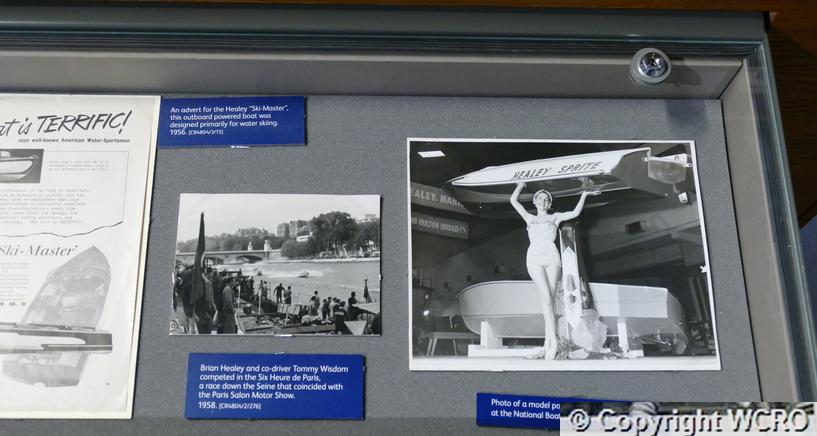 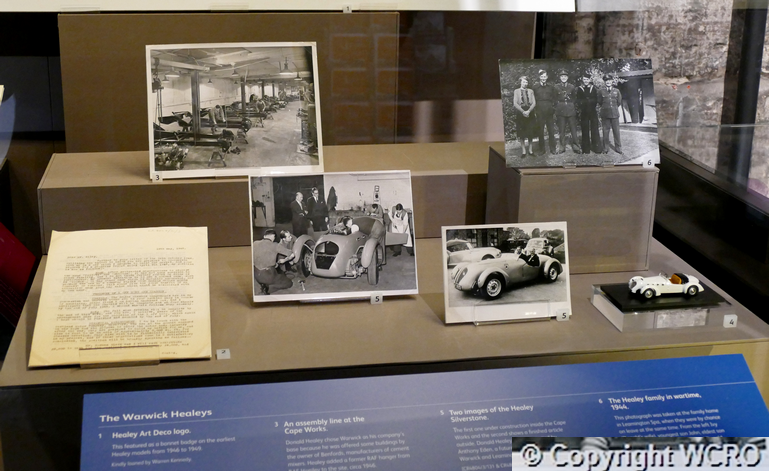 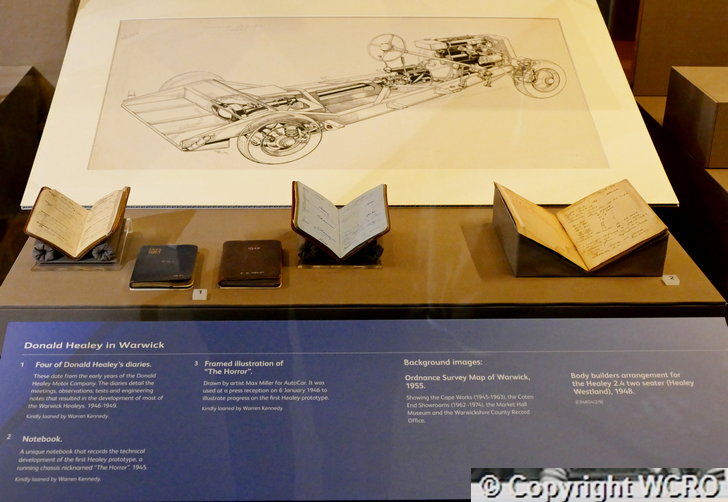 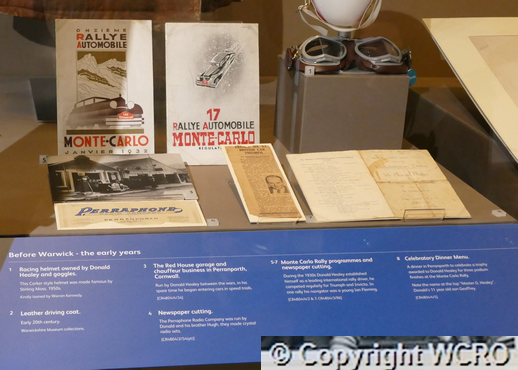 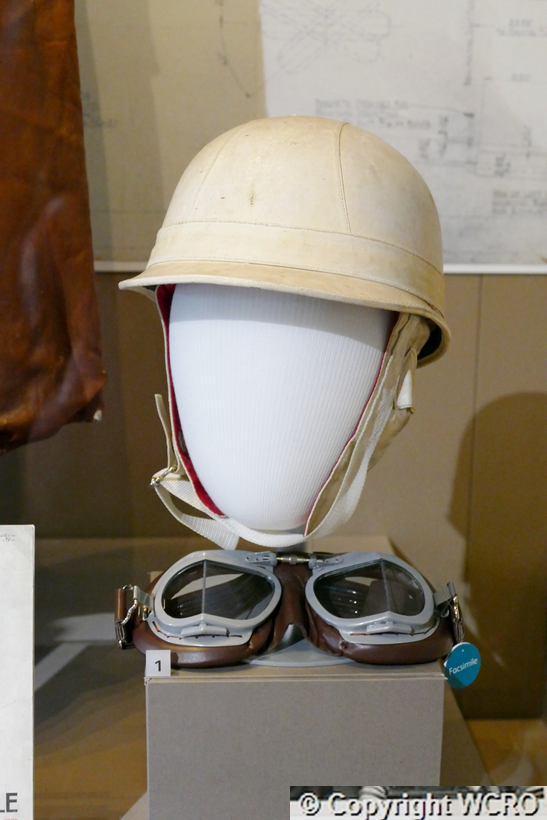 I would like to pay tribute to all those WCC employees who made such a great effort to mount this exhibition. I know, personally, of the blood sweat and if not tears then certainly, at times, the anguish that was spent and experienced. Also to say thanks to those who made us so welcome on the day. Not featured here but worthy of an honorable mention, is Richard Lewis, Collections and Development manager. On the day he was just a blur making sure that covid rules were being adhered to by wiping every conceivable surface etc. It was good to meet you Richard. 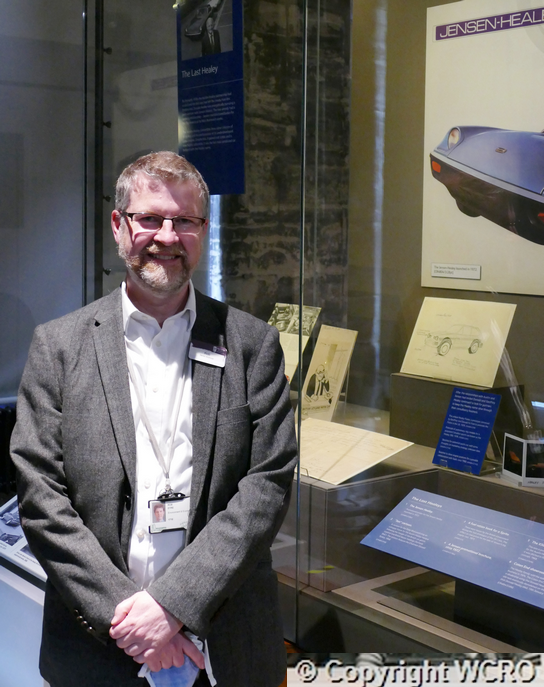 Rob Eyre – “The Main Man”. Rob has driven the Healey Archive project right from the negotiations with Geoff Healey’s family to buy the archive to organising this exhibition. Take a bow Robert! 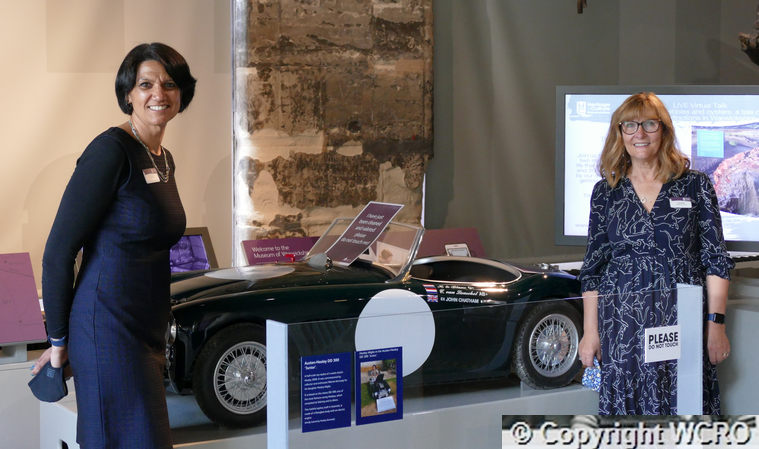 Louise Jennings and Bronwen Williams, two of the hosts who made us welcome on the day.

The purpose of this webpage is to provide information on a Museum Exhibition featuring Classic Cars and refers to material that is in the Public Domain. Carsceneinternational.com has no commercial relationship with any of the organisations referred to.