Healey – The Men and the Machines by John Nikas

The story of Donald Healey, his career in the British Motor Industry, the founding of his eponymous motor company and his outstanding achievements in racing, rallying and record breaking, is one of the richest in the automotive world. No wonder there have been so many books written about him, his cars and the achievements of both himself and his eldest son Geoffrey. In fact, both Donald and Geoff wrote books about their company and cars themselves. If you are a Healey enthusiast you could be forgiven if you thought that “books about Healey” had reached a saturation point. I do not have sufficient qualifications to be able to call myself a Healey enthusiast even though over the last four years I have built up a tremendous amount of knowledge about the marque and its origins. On that basis I would find myself agreeing with those who thought that we have reached saturation point.

Until now that is! John Nikas has established a powerful reputation in the U.S. as a talented researcher and writer on British cars sold in the U.S. and Austin Healey in particular. So any new book, on this subject, from this author, is going to attract attention. But what makes John’s latest book so special, as measured against all the other books that have been written on Healey, can be summarised by one word – “research”. John has had unparalleled access to archive material that has surfaced since previous authors were writing their books and I know from first hand experience that he has made full use of that material. I was privileged to be employed by Mr. Nikas to undertake locating and identifying material, that he required, in the Healey Motor Company archive owned and managed by the Warwickshire County Record Office (WCRO).

What I have written above represents purely my own thoughts, John Nikas doesn’t know that I have published this page and I haven’t had any contact with him since assisting him in his research of the WCRO material.

I believe copies of the book can be bought via Amazon and major bookshops, worldwide. 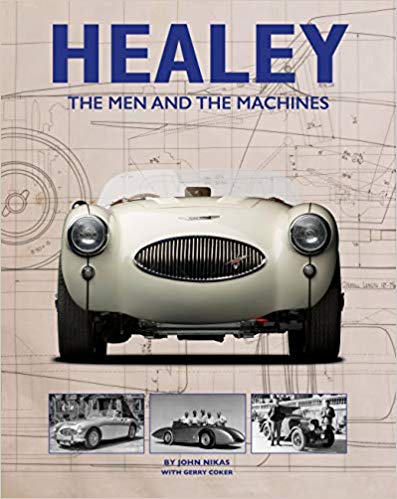 Written in collaboration with Gerry Coker, the designer responsible for the iconic Austin-Healey 100 and Sprite, this extraordinary volume represents the most accurate and complete account of the sports cars built at Warwick, Longbridge, Abingdon and West Bromwich. The author had unprecedented access to Donald and Geoffrey Healey’s private papers, diaries, scrapbooks and photo albums, corporate and financial records from BMC, Donald Healey Motor Company and Healey Automobile Consultants, the files of Jensen Motors and Nash-Kelvinator, dozens of personal interviews and exhaustive research into previously unavailable primary source material. As a result, Healey: The Men and the Machines offers a compelling examination of the true story behind these incredible automobiles and the individuals who created them.

From his early childhood and heroic service as an aviator in the Royal Flying Corps during the First World War, this book provides a comprehensive account of Donald Healey’s motoring career, including competition outings and his involvement with Invicta, Riley and Triumph. The story of the Healey marque’s birth during the darkest days of the Second World War is told through the words of the men involved, revealing the myriad obstacles that faced the small team during a period of strict rationing, limited resources and government meddling.

Fast, elegant and endowed with excellent handling, the early Healey sports cars were among the fastest in the world, acquitting themselves admirably at events such as the Alpine Rally, Mille Miglia and the 24 Hours of Le Mans, but Warwick’s survival  was constantly in doubt until the landmark agreement that resulted in the Nash-Healey erased many of small firm’s financial struggles. With access to Nash-Kelvinator’s internal  correspondence for the first time, the authors are able to set the record straight about this crucial period in the marque’s history, including the controversial machinations behind the development of the Healey Hundred that made a smash debut at the 1952 London Motor Show.

Destined to become the definitive reference on the subject, Healey: The Men and the Machines includes over 200,000 words, more than 700 detailed footnotes, and eight appendices that cover the competition and record breaking activities of the various models, specifications for every model produced, including the limited production variants, and Donald Healey’s personal musings on racing and sports car design. An instant classic, this is a work certain to inform and entertain enthusiasts of the men and machines that brought the world to its feet at a time when Britain was down on its knees.

The purpose of this webpage is to provide information on a ‘book launch’ and refers to material which is in the Public Domain. Carsceneinternational.com has no current commercial relationship with the author or distributors featured.