12th February 2016, By Nick Maltby | Comments (Closed)
This article was originally written for the Coachbuild.com website.

If you mention Jensen to the average motor car enthusiast it is most likely that their immediate response would be ‘Interceptor’. This was the iconic model produced by Jensen Motors Limited, Kelvin Way, West Bromwich, England, between 1966 and 1976.

The real ‘die hard’ enthusiasts would probably know that the Jensen brothers, Alan and Richard, formed the Jensen Motors Limited in 1936, having taken over a commercial vehicle body building company called W. J. Smith & Sons which was located in Carters Green, West Bromwich.
Alan and Richard had joined Smiths in 1931 in design and management roles. During the period 1931 to 1936 Alan and Richard added car body building to Smith’s commercial vehicle repertoire. After the takeover the brothers were able to concentrate more fully on their ‘first love’, designing and building car bodies to be fitted to proprietary motorised chassis.

Prior to the 1950’s all series production models produced by the World’s (mainly U.S. and Europe) car manufactures had separate chassis frames. On to these were mounted standard bodies (think Ford Model T) which varied by manufacturer.

There were always customers who wanted something different to the ‘norm’ i.e. a ‘bespoke’ or ‘limited edition’ model. This desire was satisfied by a myriad of specialist ‘coach builders’
You only have to look at Coachbuild.com’s encyclopedia to see the veracity of that statement.

Jensen Motors was just one of the very many body/coach builders in the U.K. who were using Wolsley Hornet, Morris Minor, Austin Seven etc. etc. motorised chassis on which to mount what they thought was their automotive ‘piece de resistance’.

Just a little more background to the Jensen brothers, taken from my The Jensen Brothers and their Cars – ‘The Beginning’
Alan (b. 1906) and Richard (b. 1909) lived in Bloomfield Road, Moseley, Birmingham U.K. when they built their first Austin 7 (Chummy) based special in 1928. Soon afterwards the family moved just around the corner to Anderton Park Road, where the second special, based upon a Standard 9 chassis, was conceived and built. This design was adopted by the Standard Motor Company with the production cars being built by Avon Coachworks of Warwick where Alan Jensen was employed to oversee final design and production.

One of the Jensen’s near neighbours, in Anderton Park Road, was Ronald ‘Ron’ Tombs Horton, the successful MG Midget and Magnette competitions driver. They lived at number 95 he lived at number 45.He got the Jensen brothers to design and build special bodies for some of his cars (see below).

Here are some examples of Jensen brother’s work – 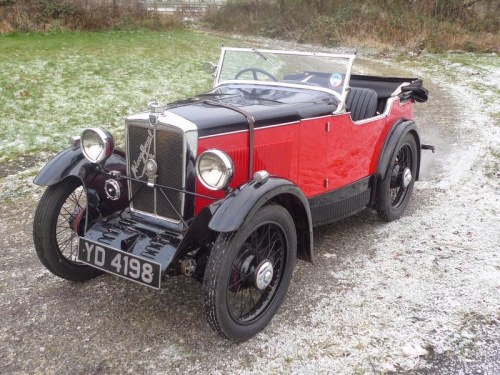 Others (courtesy of ‘Tommy K’ subscriber to coachbuild.com) 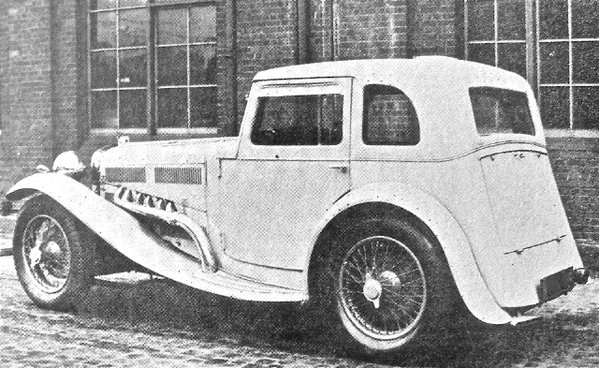 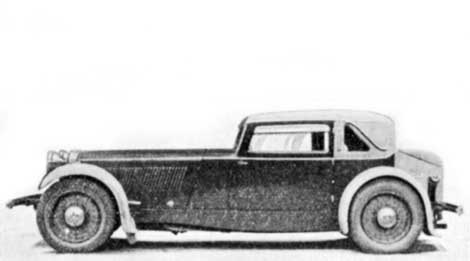 1936 Moveo Sports Coupe by Jensen. A Meadows engined sports coupé from Preston, the Moveo was actually listed in 4½-litre, standard, 3-litre and blown 3-litre forms, though it seems that only one was ever built. 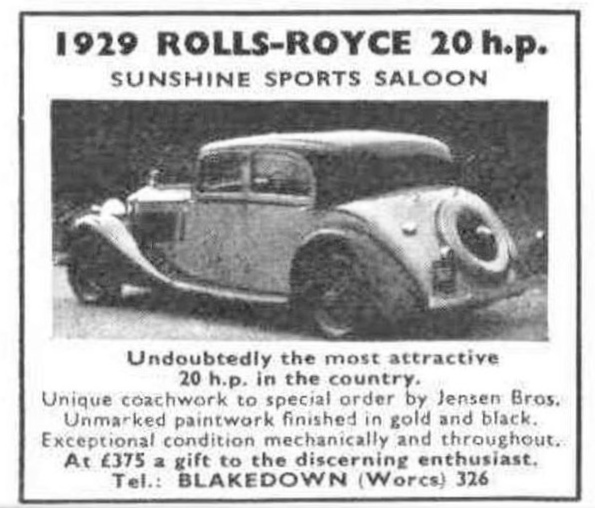 Although this advertisement says this Rolls Royce is 1929, the chassis and running gear might be but the Jensen body is c1938. 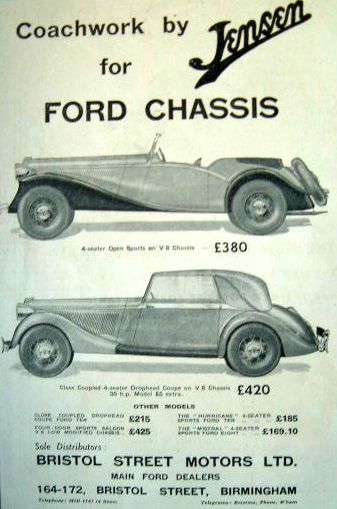 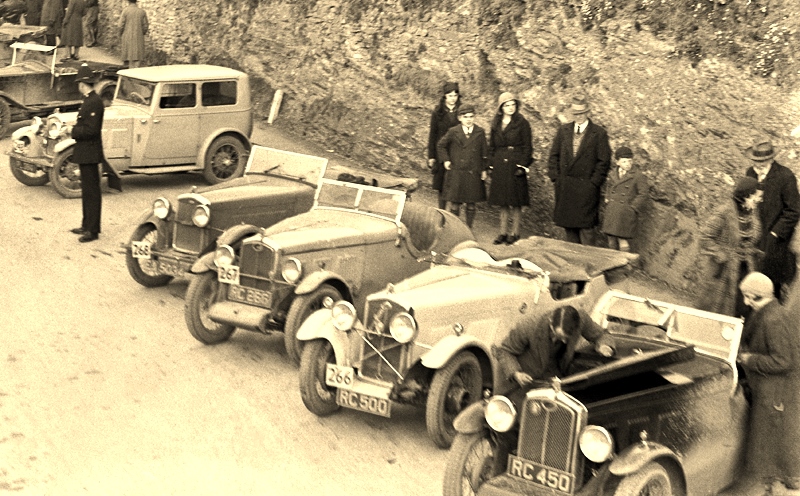 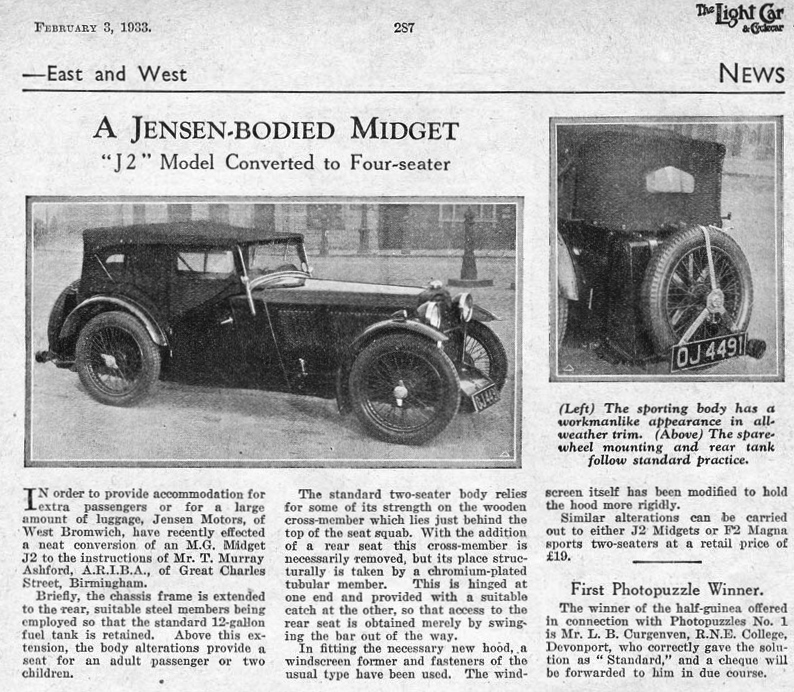 Note: – This article is the copyright of Nick Maltby of carsceneinternational.com and has been produced for publication on the www.coachbuild.com website.

PS. I started off by suggesting that most general car enthusiasts would be familiar with the Jensen marque via the ’66 – 76′ Interceptor model; the ironic thing is that the Jensen brothers had nothing to do with that car except that it used a similar chassis design to that which most Jensens had used since 1952. I must acknowledge that the 541 chassis did have a major revision in 1962 with the 4.0 inch diameter perimeter tubes being replaced by two centre tubes of the same diameter. This change was introduced with the launch of the C – V8 model. It is generally accepted that the ‘C’ in C-V8 stands for ‘Centre Tube’. The idea behind this change was to make the chassis more adaptable to different body styles including four door models. The Italian designed Interceptor used the same chassis design as the C – V8 but the FF reverted to using the previous perimeter tube chassis from the 541 S, suitably modified to accommodate the four wheel drive transfer box and front wheel drive.
The Jensen brothers had sold the company to an industrial holdings company called ‘Norcross’ in 1959 but continued running the company. They were aware that the C-V8 model needed replacing and they were even more aware of the need to find a replacement for the Austin Healey bodybuilding contract which was coming to an end in 1967.

They had asked their chief engineer and stylist Eric Neale to design a car which would fulfil both those roles. It was given the code name P66.

The sales director, Dick Graves and the deputy chief engineer (chassis), Kevin Beattie, persuaded the Norcross members of the Jensen board that the P66 was ‘not fit for purpose’ and asked for permission to approach an Italian design house to design a car.

A design submitted by Touring of Milan was chosen and a prototype was built by Vignale of Turin because Touring did not have the capacity at that time. This would become the new Interceptor.

The Jensen brothers wanted to pursue the P66 design on the basis that it was in the true tradition of ‘their’ company. They were out voted and the rest is history.
Neither of them was in robust health and they took this opportunity to resign from the company. A few months later Eric Neale, who had influenced all the Jensen car designs from 1952 onwards also resigned.

The end of an era but the start of one which would ensure that the Jensen marque would be remembered for evermore via its Italian designed Interceptor and FF models.
These cars have an incredibly strong following in the U.K., the U.S., Europe and Australia. All these countries have active owners clubs. It has also had a ‘halo’ effect on all the previous Jensen models.