Part One was certainly all about Alan and Richard Jensen, the cars they designed and built in their pre WWII days and the cars they commissioned via Eric Neale, their Chief Body Engineer, during the 50’s and 60’s. At the same time they guided their company through exponential expansion via the external contracts they won to build Austin Healeys, Volvo P1800s and Sunbeam Tigers.
Sadly, from the point of view of the brothers influence on and control of their company, part two is not so much about the brother’s role in the company that they created. It is, however, about, arguably, the greatest period of the Jensen marques existence.
Up until the introduction of the ‘new’, or, ‘Italian designed’ Interceptor, in 1967, Jensen  cars had been  built to order at a rate of not more than five per week. Jensen’s existence was only known of by, mainly, car enthusiasts. Although the cars were admired and respected by those who owned or knew of them, they were not particularly aspired to in the same way that, say, Aston Martin was and is.
The stunning CarrozzeriaTouring design for the ‘new’ Interceptor was to change all that. It was a car that grabbed the attention of ‘the man in the street’ even though most could not afford to buy one and even if they could it wasn’t exactly a ‘family runabout’.
It was a car that began to be seen in advertisements for aspirational goods and in films, in a similar manner to how Aston Martin cars had been shown hitherto. It was a car that put Jensen ‘on the map’ so to speak.
But it was a car that was produced by Jensen in spite of the Jensen brothers and was the beginning of their detachment form the company which bore their name. This is not an unusual situation in commercial life. Also Jensen was not immune from all the maladies which were affecting the British Motor Industry as a whole at that time – poor industrial relations, poor quality and lack of investment.
What I am intimating, is, that against that overall background together with failing health, the brothers time, of being at the helm of the company, had come; it was not directly related to the fact that they, initially, had not been in favour of ‘going to Italy’ for the design of the next Jensen badged car.
Let us go back a step, the brothers and Eric Neale had realised that the CV-8 needed to be replaced as the flagship of the Jensen Motor Company. Eric and his team designed a new car which was given the code name ‘P66’ (the car to be launched in 1966). Prototypes were built and approved, at least by the Jensen brothers.
The P66 was to be a very different car to the previous 541 – CV-8 models which were Grand Tourers. The new car was more in the mould of a Sports Tourer similar to the Jaguar XJS and Mercedes 250SL. It was to be cheaper than the CV-8 and therefore, hopefully, to be produce and sold in greater numbers, maybe with the U.S. market in mind.
All this is speculation on my part although the facts seem to fit. In any case it is entirely academic for the reasons set out below.

In 1959 a U.K. Investment Company by the name of ‘Norcross Holdings plc’ had taken control of Jensen Motors Ltd. and although the brothers were still nominally in control of the company they had to consider the views of directors appointed to the ‘board’ by Norcross.
Kevin Beattie the Chief Chassis Engineer, who was later to become Managing Director of the company and Richard Graves, the Sales and Marketing Director, took the view that something more exciting than the fairly uninspiring P66 was required for the next Jensen model. I don’t know the exact train of events but the result was that Kevin and Richard were introduced to Carrozzeria Touring Superleggera who took their brief for a ‘Grand Touring’ car in the true sense of the term and came up with the stunning Interceptor model that we all know and love. It still looks good to day, as do, in fairness, Eric Neale’s 541 models, designed a decade and a half before the Interceptor.
Kevin and Richard were able to convince the ‘Board of Directors’ to back the Carrozzeria Touring Superleggera design and Jensen embarked upon a significantly different journey to that which it had been travelling before.
Not long afterwards Alan and Richard  resigned from ‘their’ company and a little later Eric Neale did the same. His car designing days had come to an end and Jensen’s days of making fibre glass car bodies were also finished.However sad those departures were, there are few who would not agree that the decision to adopt the Touring design was the correct one.
The initial production bodies were built by Vignale of Italy until production facilities could be established at Jensen’s Kelvin Way, West Bromwich, factory.


Another significant change in ownership of the company occurred in 1970 when
Mr. Qjell Qvale, a Californian based car distributor (he was big in Austin – Healeys in the 1960s), bought the company from Norcross.
His main reason for doing so was to build a replacement for the Austin – Healey 3000, production of which had ceased in 1967.
This was achieved, to a degree, in 1972 when the Jensen Healey sports car was launched.

For more on this story see Part Three of this series of posts (not yet written as of 4th May 2014).
In writing all the above, I have decided that there is going to be a part three to this series; this will be dedicated to the ‘Contracts’ (Austin Healey, Volvo P1800, Sunbeam Tiger and
Jensen – Healey.)


Here are the images in support of the story  – 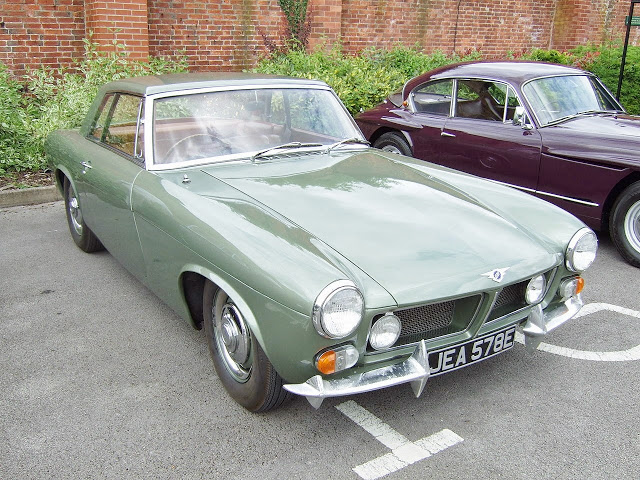 The annual Classic Car Show was held at Birmingham’s National Exhibition Centre over the week-end of 13 – 15 November 2015. The Jensen Owners Club had its usual stand there. On the stand this year was Derek Chapman’s recently refurbished Jensen P66 Coupe, the only one ever built!
The reason for this special announcement is to tell you that the P66 was awarded the ‘Car of the Show’ award.
What a well deserved accolade for Derek, the Club, Jensen Motor Company and most of all for the man responsible for the car’s styling, the late Eric Neale.
I was working in Jensen’s Kelvin Way drawing office when ‘Project 66’ (designated to be named ‘Interceptor’ after the 1950 – 54 car) was conceived and built.
In particular I remember Kevin Beattie, the Chief chassis engineer at the time, supervising torsional rigidity tests on the first prototype’s (a soft top/open version) body/chassis assembly.

There was nothing as sophisticated as electronic strain gauges or sensor pads used, there were just a series of long steel bars with weights attached and rulers and protractors for measuring
deflection. I remember the members of staff involved in the tests being delighted with the results.
What I wasn’t privy to at the time were the machinations that were taking place, in the corridors of power, concerning the future of the P66 and ultimately the future of the Company itself. I refer
to this situation in the body of the article below.

The cabriolet version was destroyed once the decision not to proceed with the P66 had been taken. But for some reason the Coupe was allowed to remain intact.
In 1968 this car was sold to a member of  the public, a dentist named Mr. Atkins of Canterbury U.K. In 1976 this car was auctioned by Bonhams in London and was bought by a Dr. Knapp of New Jersey, USA. It was to remain in the States until 1988 when it was brought back to the U.K. by Jensen Cars Ltd., the company that had risen from the ashes of the original Jensen
Motors Ltd.

Since then it has been owned by Mr. Michael Williams, a member of the Jensen Owners Club and the current owner Mr. Derek Chapman. At the bottom of the page there is a link to Derek’s excellent website dedicated to the Jensen P66.

The end of an Era 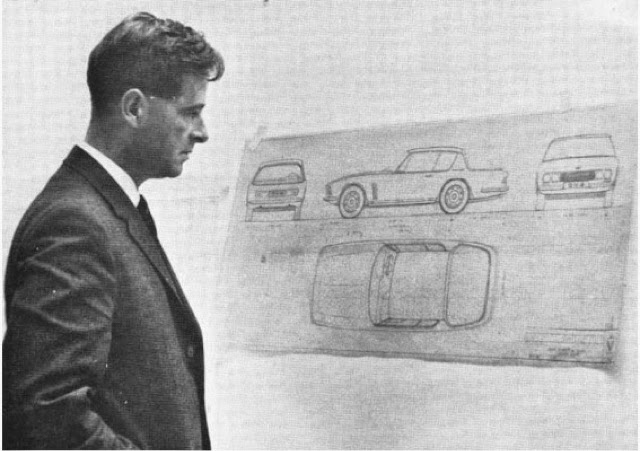 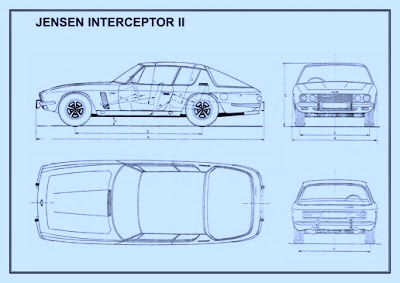 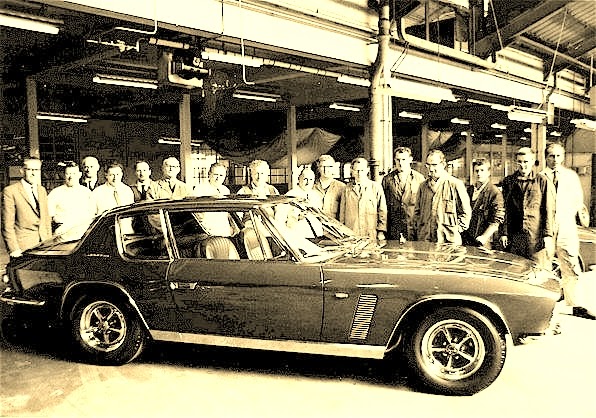 The First Interceptor at Kelvin Way 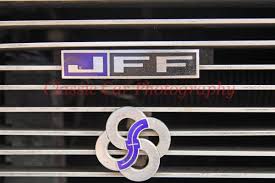 A little snippet – Harry Ferguson Research Ltd. were a little unhappy about all the publicity the Jensen FF car was receiving but without the hoped for attendant spin off to the four wheel drive mechanisms designers. So they requested Jensen to attach a specially designed Ferguson Research badge to the front grille of all Jensen FF models. Because of the late decision the first few cars were not fitted with this badge.