It was mainly David’s idea, he thought that it would be good to see how the prestigious MG Car Club organised and presented its archives etc. He has had a long connection with the Club and is a member of the Abingdon Works Centre branch. He doesn’t live far away whereas I live just north of Warwick, former home of the Donald Healey Motor Company.                                                     I find it fascinating that two of England’s historic towns, that can trace their histories back to Saxon times, between the 7th and 9th centuries,  have in common the ability to lay claim to two of the U.K.’s, if not the World’s, most famous car companies. Warwick is the county town of Warwickshire and Abingdon was the county town of Berkshire until 1869 when it ceded that title to Reading.  In 1974 a number of English county boundaries were altered and Abingdon found itself on the Oxfordshire side of the new boundary between that county and Berkshire.

Cecil Kimber, as head of Morris Garages (William Morris’s original, sales and service company and until 1935 solely owned by him)), Oxford, decided that he could sell more cars if he customised them. So in 1923 the Morris Garages ‘Chummy’ was launched. Kimber applied the same philosophy to all the Morris range of cars and as ‘Morris Garages’ in front of the vehicle type name became a bit of a mouthful, customers started to refer to these special models as MGs. In 1924 an Octogan surrounding the letters MG was established as the marques badge and logo. The line became so successful that in 1929 production was moved to a new factory in Abingdon with Cecil Kimber as its managing director.

So the marque that would get young men’s hearts racing around the World was born. I could say that the MG Car Club headquarters is a shrine to the marque itself and all the great men that made it happen. But that would give an entirely wrong impression, yes, there are a lot of memories enshrined within the building and anyone of a certain age or interest in automobile history could not fail to be excited by what there is to see. However, Kimber House is much more than that, it is a thriving club attending to the needs of thousands of MG enthusiasts around the World. There is probably as much interest in the MG brand now as there was at the height of its fame in the 1930s through to the 1980s.

The good news is that the Chinese owner of the brand name, SAIC, has got great plans to exploit their valuable asset. But even better news, for MG Club members around the Globe, is the fact that SAIC have gone out their way to develop good relationships with the MGCC. Based upon my visit I would say the future is very bright indeed.

As ever let the pictures tell the story – 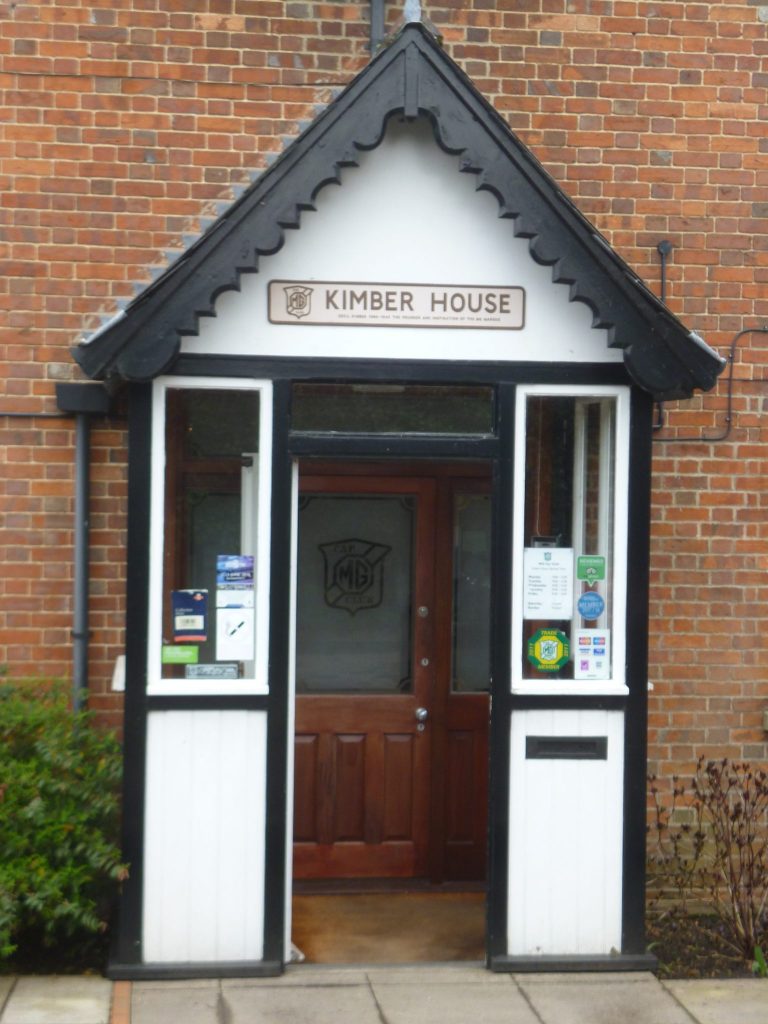 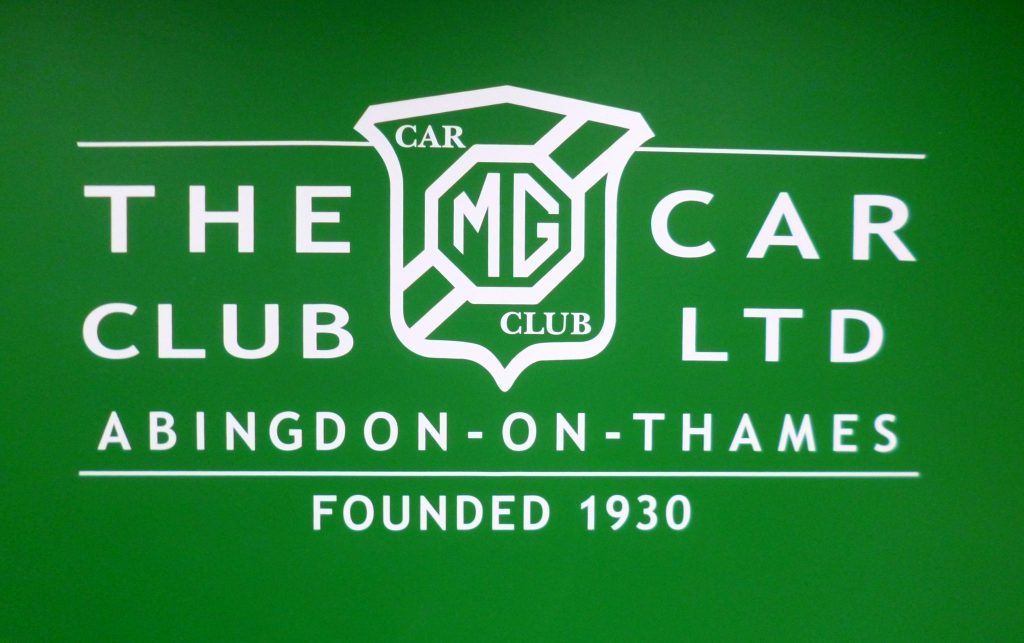 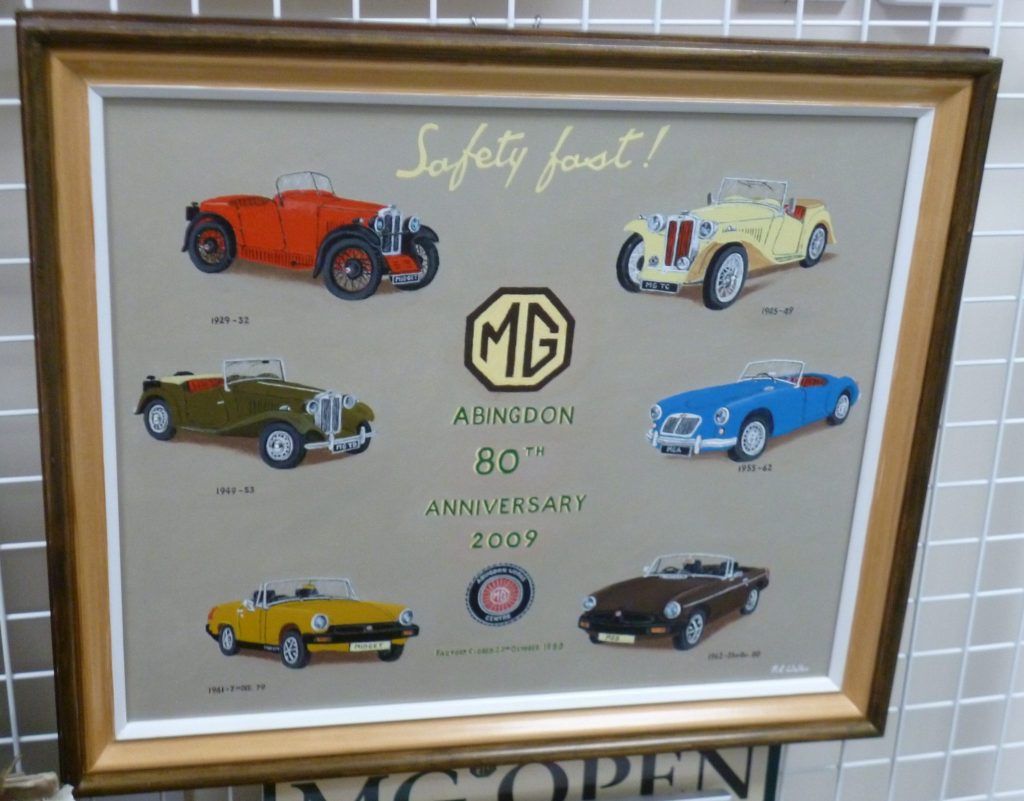 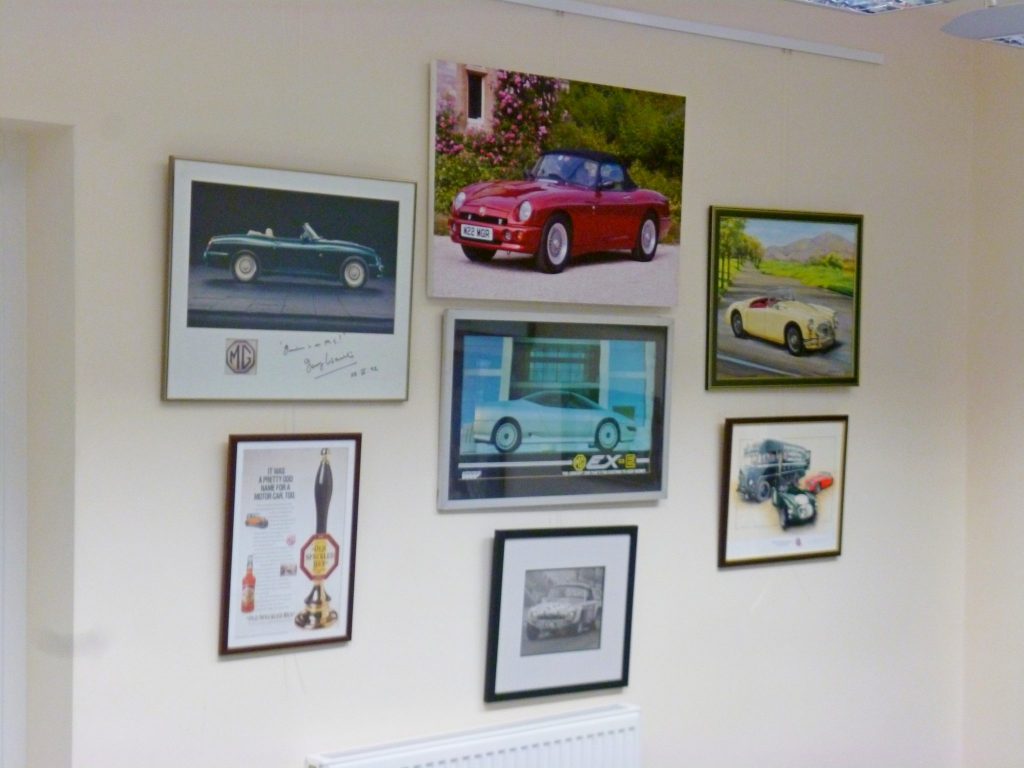 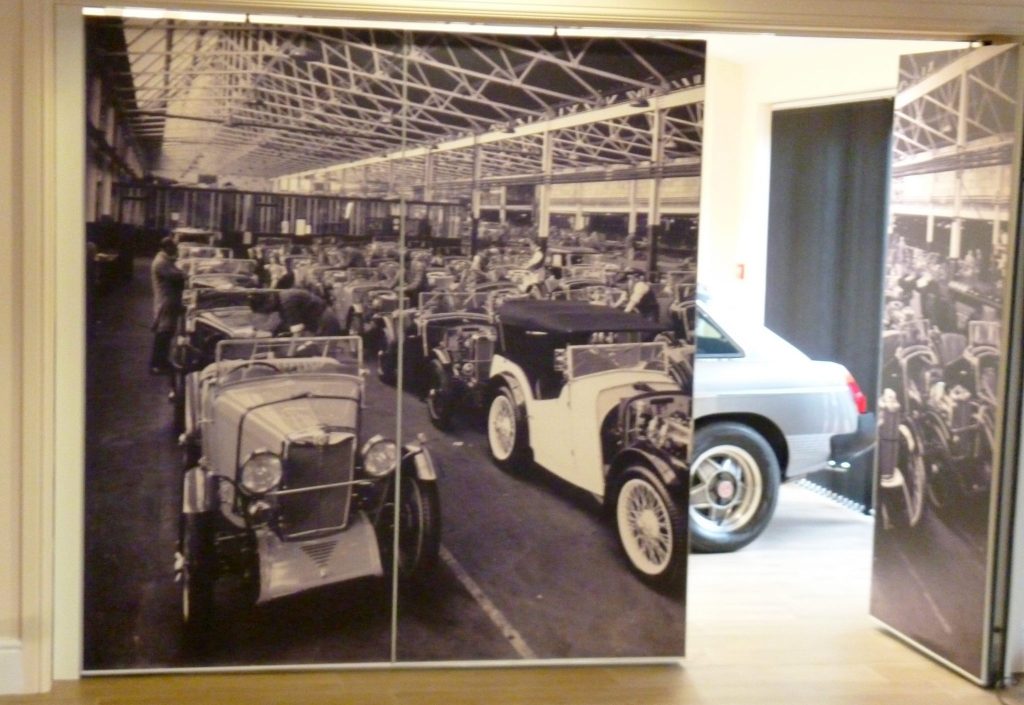 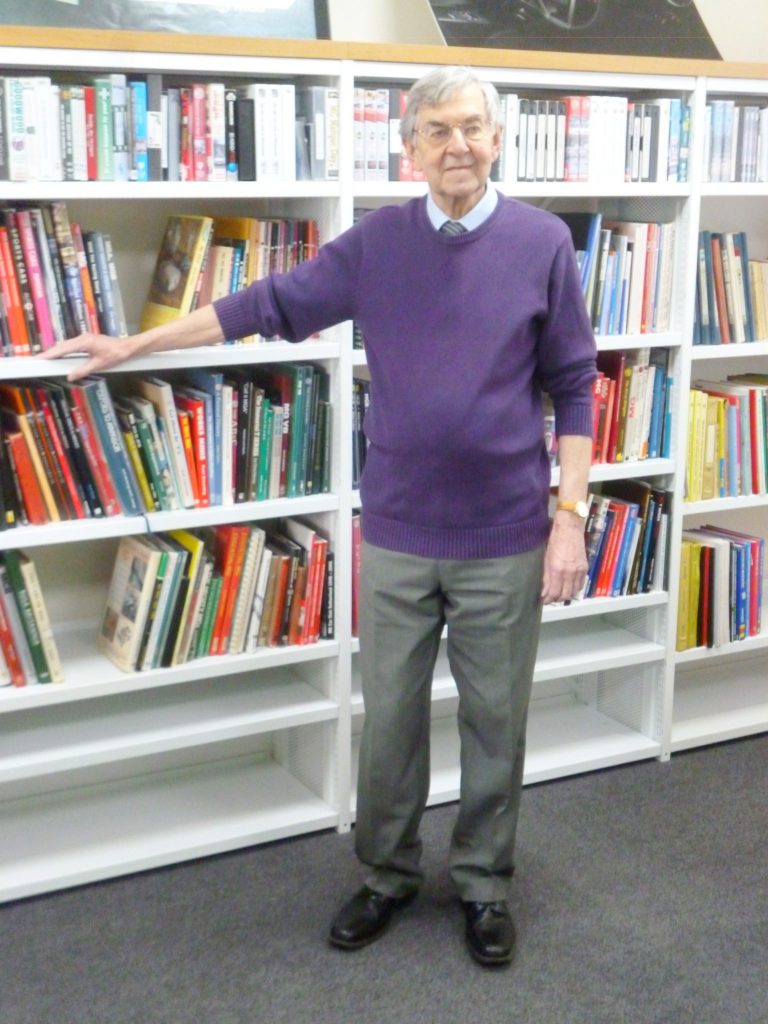 Peter Neal the Archive volunteer and our genial host for the day, in ‘The Library’ 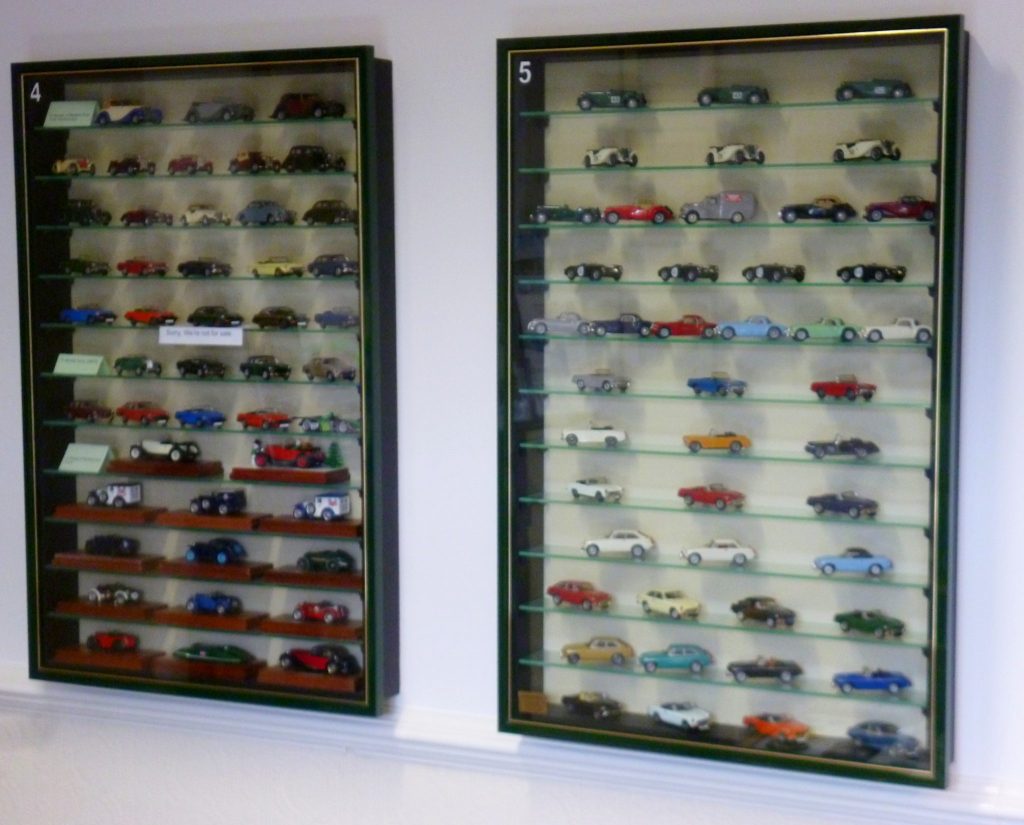 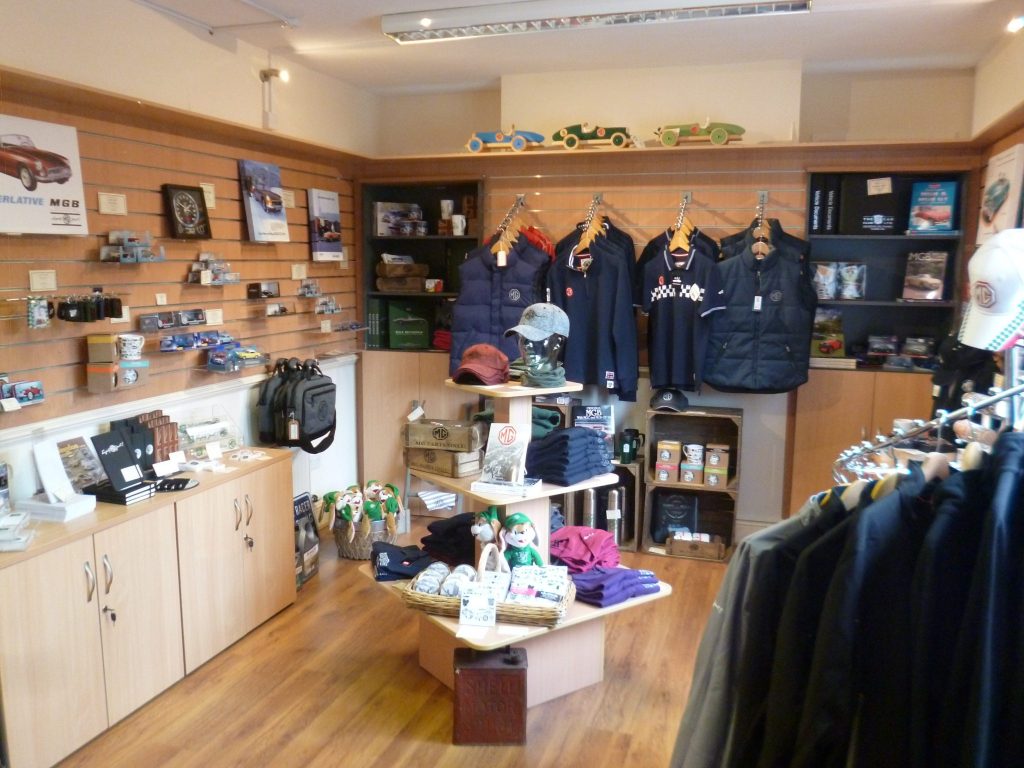 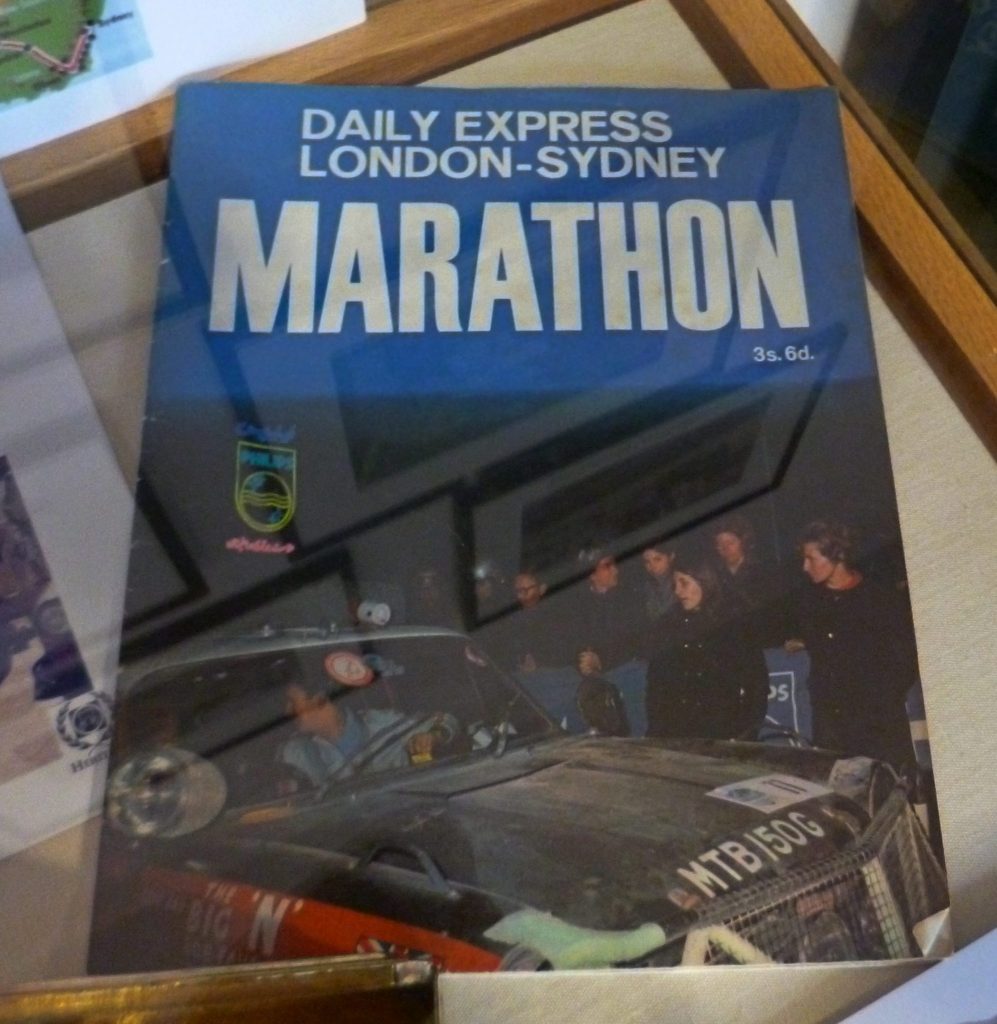 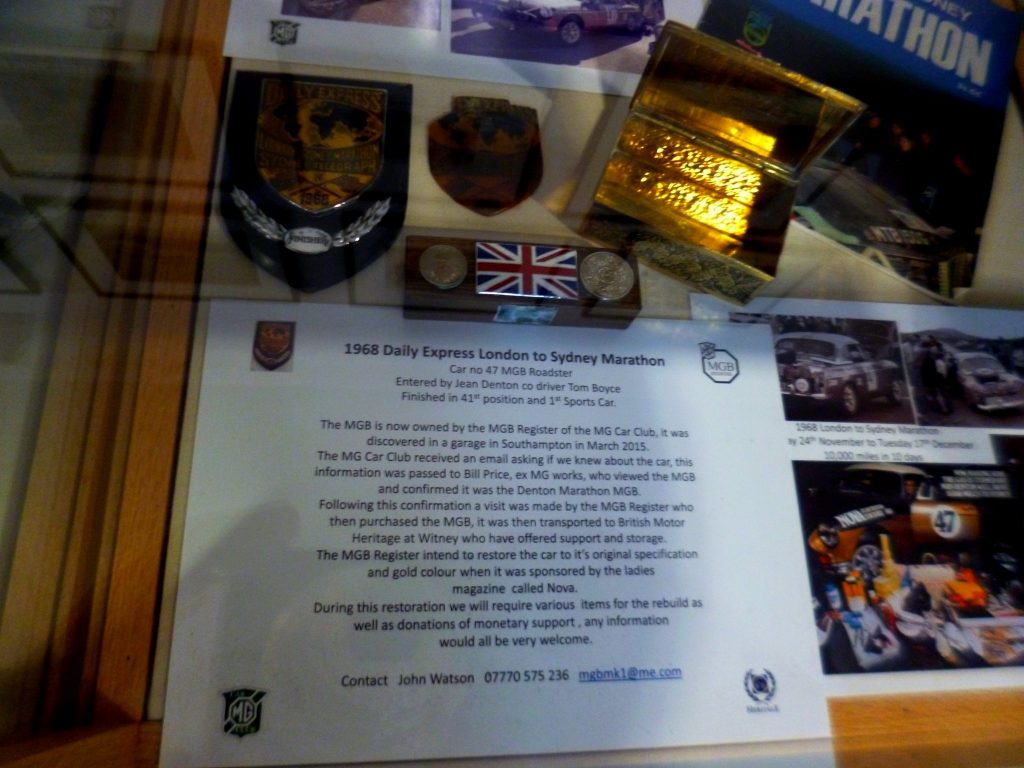 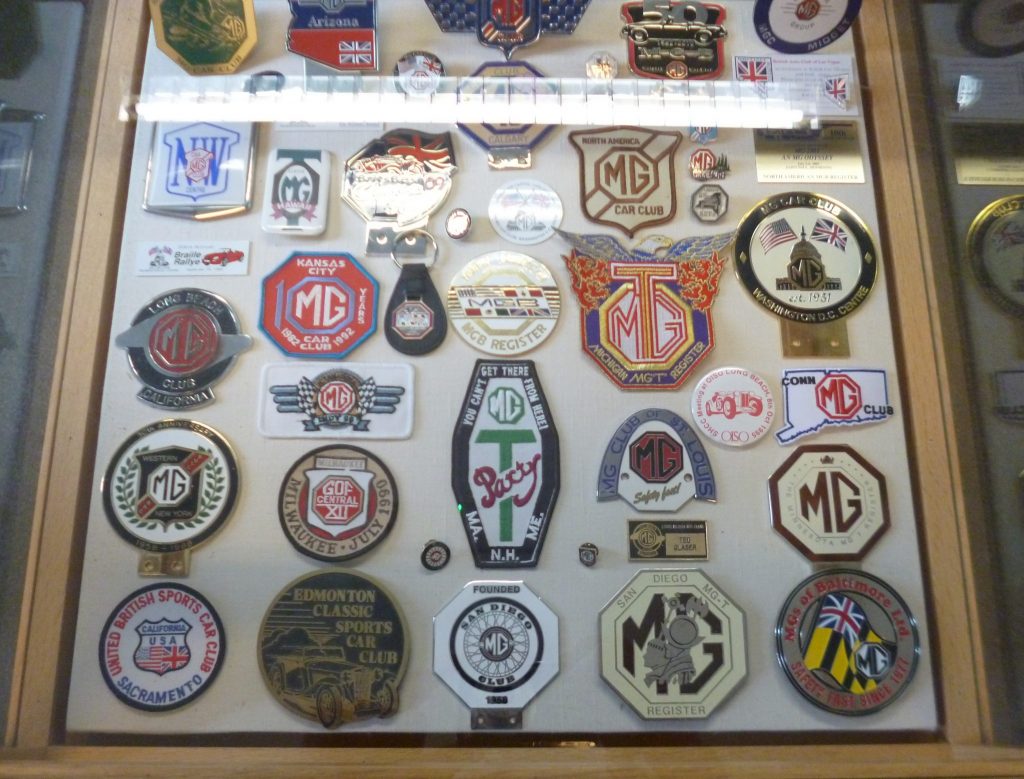 A Collection of Club badges from around the World 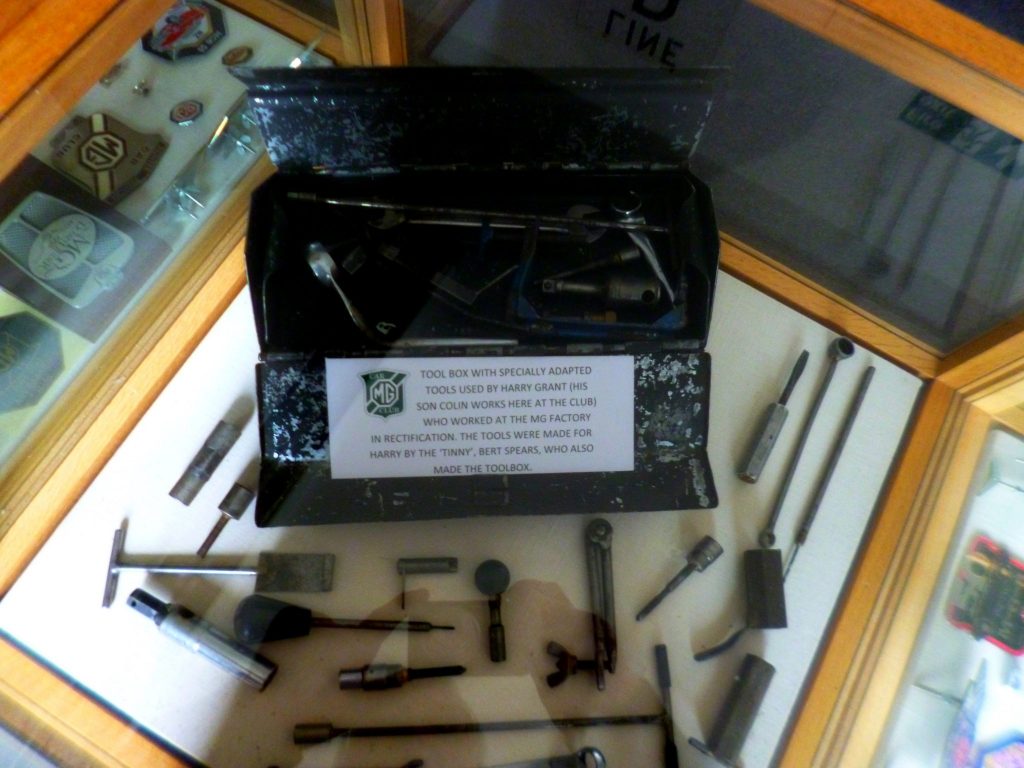 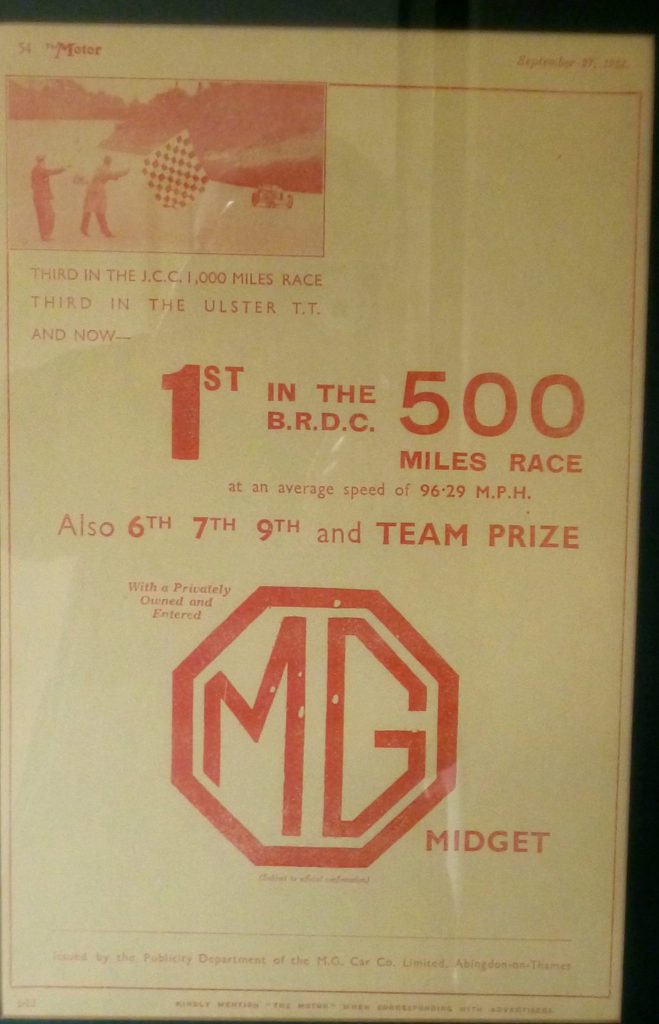 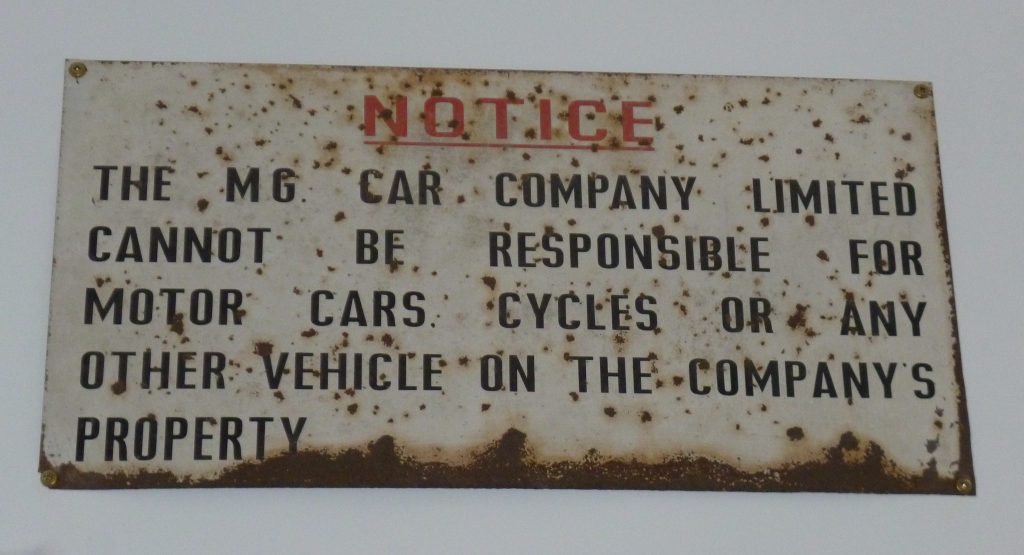 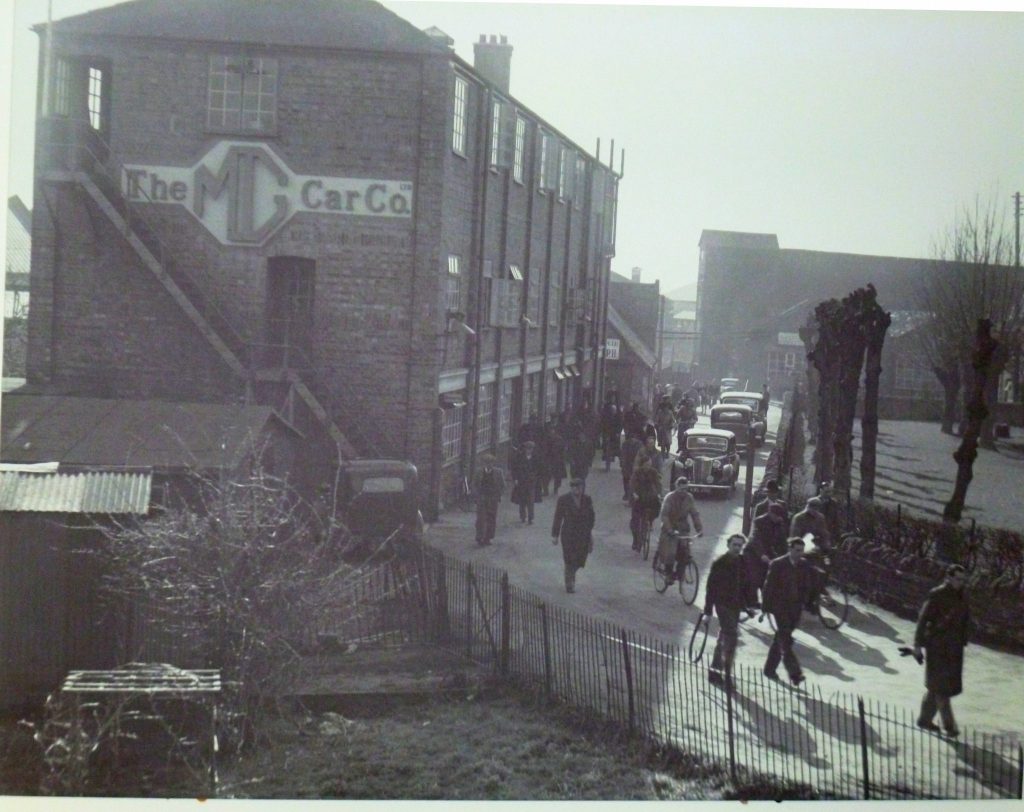 The old MG Factory Abingdon, just a stones throw from Kimber House which is just to the left of where the photographer is standing. The building in front of you housed the admin. offices. The building still exists, see the next photo. The above photo is displayed, poster size, inside Kimber House. 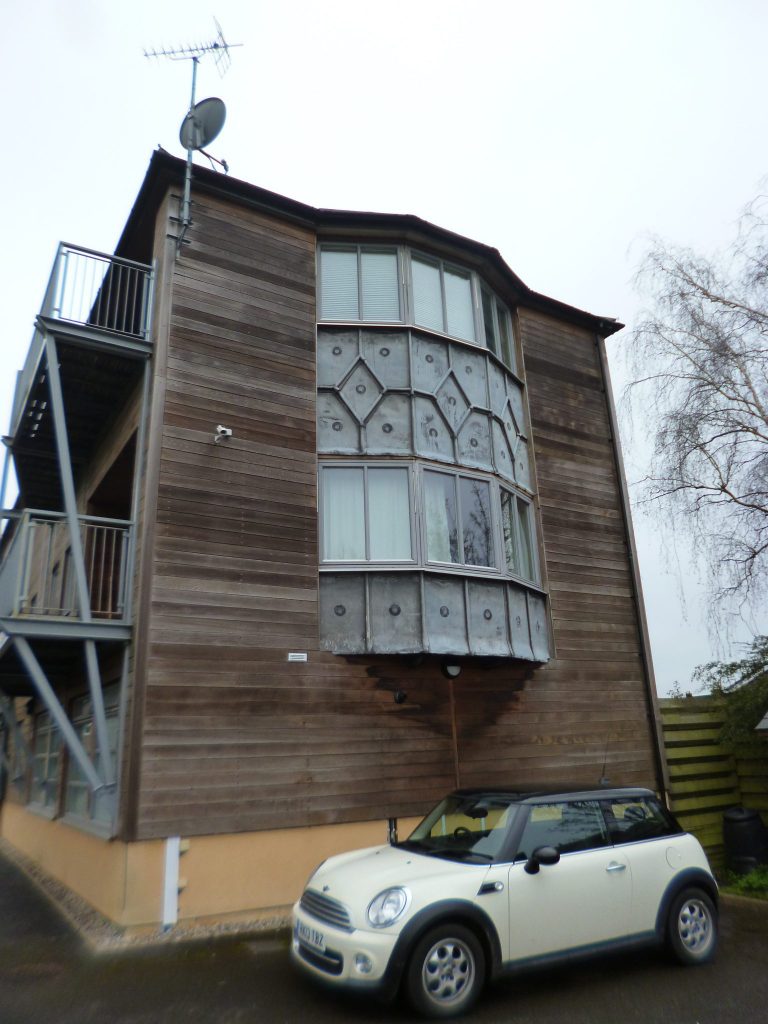 This the original ‘bay widow’ of Mr. Kimber’s and later John Thornley’s office, on the factory side of the admin block now turned into apartments with their own balconies. The original brickwork has been covered in wood cladding. The Mini in the photo is built on an adjacent site to the original Morris (the parent of MG) car factory in nearby Oxford. 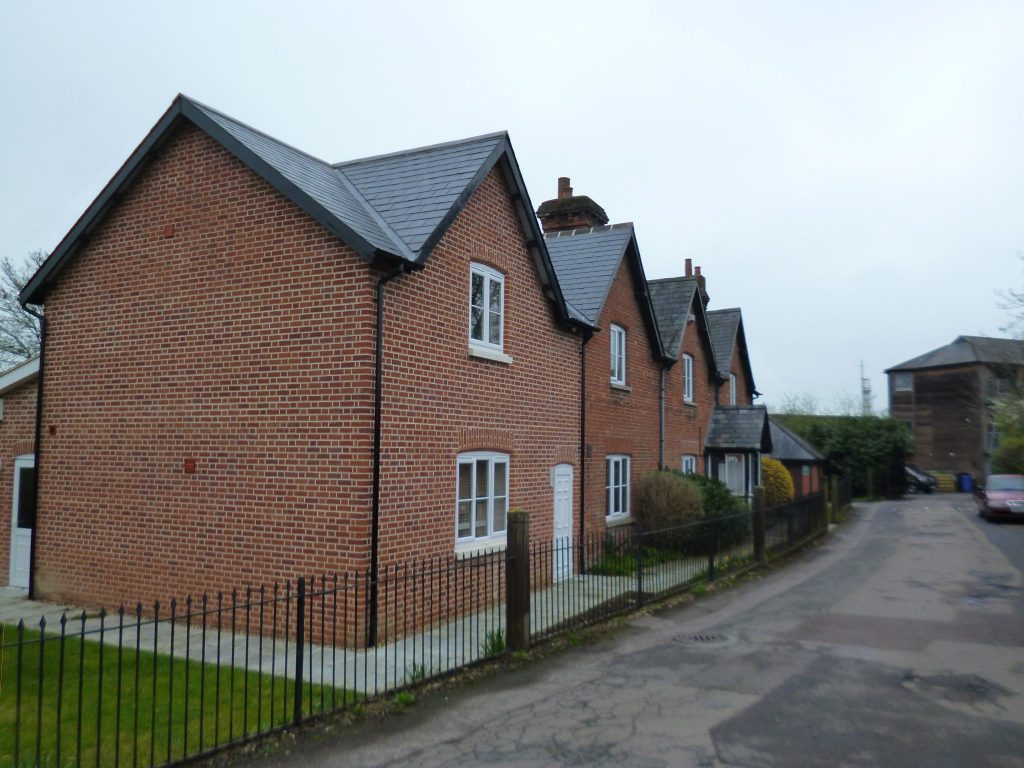 This view of Kimber House shows the sympathetically designed extension built in 2013. The building in the distance is the old admin. block. 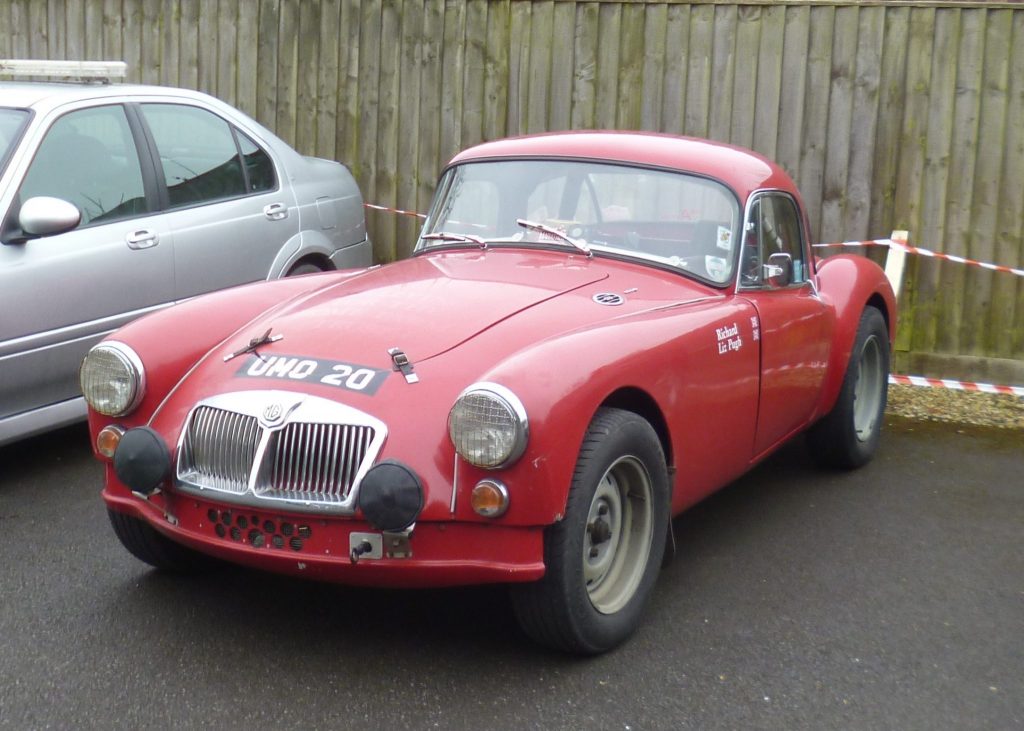 David’s MG A, a Mk I with MK II Grille and Triumph TR 5 Wheels 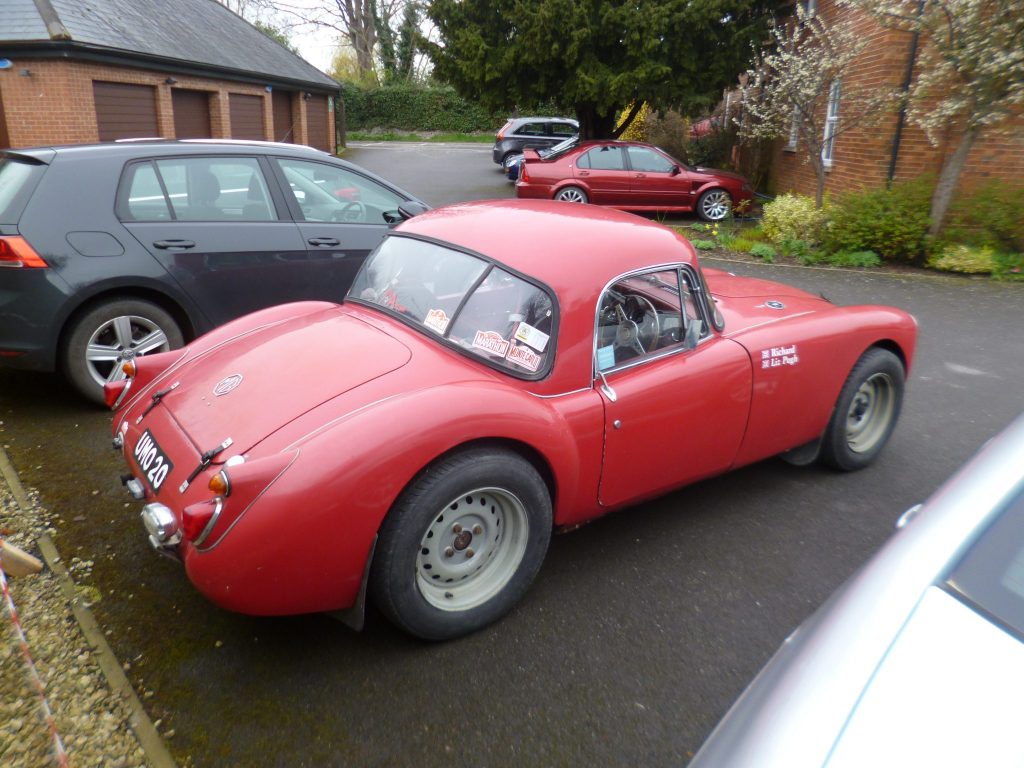 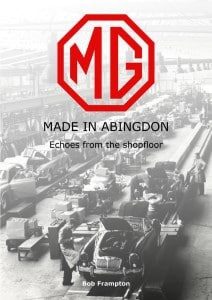 After visiting Kimber House we called into the Abingdon Museum which has a small section devoted to MG. Whilst there we came across this book which has only recently been published. It is written by local historian Bob Frampton. 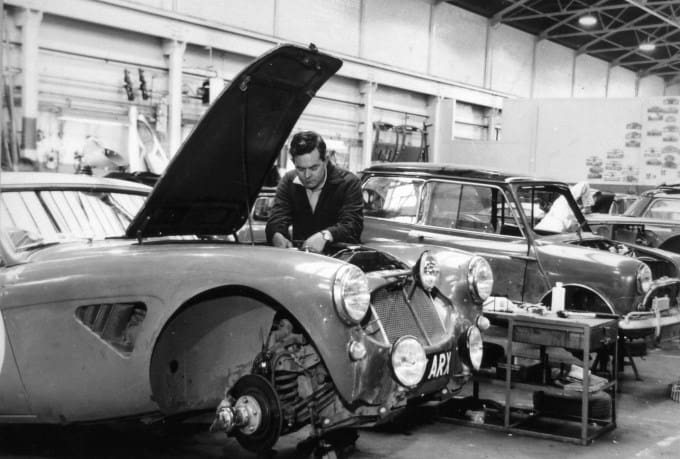 Here is a photo from Bob’s book which will please the ‘Healey’ fans reading this post. It reminds us that the BMC Competitions Department was located in the MG factory. And of course the Big Healey and Spridgets were assembled there too.

So, that gives you a small insight into what happens at the MGCC’ headquarters, Kimber House, Abingdon. MG owners should be very proud to belong to such a committed organisation. That doesn’t mean that it is perfect, I am sure that the staff would be the first to admit that. But I would think  that their motto is the same as mine “continuous improvement”.