I am publishing this post in celebration of Warren Kennedy (Classic Restorations, Milton Keynes) completing the restoration of his Nash Healey X5 car in June 2020.

When people think about the Donald Healey Motor Company’s many successes in car racing, rallying and record breaking, it is likely that the ‘Big’ Austin Healey (100/4. 100/6 and 3000s), the Sprite and perhaps the Healey SR and XR37 are the cars which first come to mind. However, it could be argued that the most successful Healey cars, certainly as far as the Le Mans 24 hour endurance race is concerned, were the ones sharing their naming with Nash, of the U.S.A.

Most Healey enthusiasts are aware of the chance meeting between Donald Healey and George Mason, C.E.O. of the Nash Kelvinator Corporation, USA, when DMH was travelling to the U.S., aboard the ocean liner, Queen Elizabeth, to try to secure a supply of engines from Cadillac. This meeting led to the DHMCo. building Nash Healey sports cars to be sold by Nash dealers in the United States. But Donald, always interested in using competition to generate publicity, soon saw the benefits of using the rugged Nash engine in a car of his own design. Here is that story –

Not long after Donald Healey had accepted George Mason’s request for him to build a Nash badged sports car for the U.S. market, he, eldest son Geoffrey and cheif experimental department engineer, Roger Menadue, started to examine the Nash engine’s competition potential. Father and son decided to drive a suitably adapted Healey Silverstone, fitted with a modified Nash Dual Jetfire, in line, six cylinder engine, in the 1950 Mille Miglia road race. This famous, gruelling, road race, established in 1927, ran from Brescia to Rome and back to Brescia, covering a distance of around 1050 miles, using public roads. The Healeys finished in 177th place out of a total of 375 starters and 213 finishers and achieved a creditable ninth in class. Inevitably, they discovered some shortcomings in this hastily constructed competition car, which had been identified, at the factory, as X4. First of all, it wasn’t as quick as some of the direct competitors and secondly, the engine oil got very hot if high speeds were maintained for long periods.

Next up, in June, just over two months away, was the Le Mans 24 hours race. In preparation for this event the development team, led by Roger Menadue, got to work on the car with some urgency. The engine was fitted with a high-lift camshaft and new piston rings, the latter reduced blow by and as a consequence, helped to lower the oil temperature which had been a problem in the Mille Miglia. Power output was raised to 126bhp at 4600rpm. The AOC (Automobile Club de l’Ouest), the organisers of the race, had ruled that cycle wings were no longer acceptable, so as a solution the Healey team came up with an all enveloping body design encompassing the headlights. The bodywork was created by the very talented Healey stalwart, Bill Buckingham. This car was given the designation X5. With these aerodynamic and engine improvements, the car was now able to reach and hold 124 mph.

Duncan Hamilton and Tony Rolt were entered to drive the car for the race. The car was given race number 14. During the race, with Duncan Hamilton at the wheel, the Nash Healey took an “off track” excursion as a result of being hit by another car. This caused damage to the bodywork and rear suspension. Roger Menadue was the single assigned pit-side mechanic and it was he who had the task of repairing the damage as best he could with rudimentary tools. It took him about twenty minutes to do so. He must have done a good job because Hamilton and Rolt covered a total of 2103.262 miles at an average speed of 87.635 mph. This placed them fourth overall at the end of the race, behind the first and second placed Talbot-Lagos and the Cadillac powered Allard of Sydney Allard and Tom Cole.

In the 1951 Mille Miglia, Donald Healey, again partnered by son Geoff, finished 30th overall and fourth in their class. Other drivers of Nash Healey cars scored various successes in both club and national events throughout the year, using standard and modified cars. At Le Mans, in June, Rolt and Hamilton drove what had been the 1950 prototype but now rebuilt as a coupe (race number 19). They finished an impressive sixth overall at an average speed of 89.289 mph and achieving a top speed of 130 mph on the Mulsanne Straight. The coupe body was then removed from the original prototype chassis and fitted to a chassis that had been developed for the job and designated X6. Both the original prototype (X5) and the coupe were entered in the 1952 Mille Miglia, by which time they had been fitted with the larger capacity (4.1 Ltr.) version of the Nash Dual Jetfire straight six engine. This was now the engine that was being used in the production cars. Incidentally, the Nash Healey sports car was now being built in Turin, Italy, by Pinin Farina, using motorised Healey chassis shipped from Warwick.

Donald and Geoff crashed with the coupe, but Leslie Johnson partnered by Bill McKenzie, the motoring correspondent of the Daily Telegraph, finished seventh overall and fourth in their class of the International Sports category, a very creditable result.

The damaged X6 coupe was taken back to Warwick for repair but it was decided to enter it for the Le Mans race as an “open top” car. So, once again Bill Buckinghm’s skills were called upon to carry out the conversion. This car was allocated race number 10 and was to be driven by Leslie Johnson and Tommy Wisdom. History was to repeat itself in 1970 when the previous year’s SR coupe was converted into the “open top” XR37. Once again the Nash Healey performed above all expectations in the hands of these two experienced Brits, taking third place at an average speed of 91.497 mph, behind the leading Mercedes-Benz 300SLs. The 1950 prototype, race number, 11, was driven by Pierre Veyron and Yves Giraud-Cabantous. It was fitted with a new cross-pushrod hemi-head, designed by ‘Sammy’ Sampietro, one of the founding members of the DHMCo. but a broken rocker shaft eliminated it during the third hour of the race. Nothing more was seen of that head design.

In 1953 Healey built two new competition versions of the Nash Healey with extended bodywork front and rear. They were fitted with Laycock-de-Normanville overdrives. The aerodynamic aluminium bodies were fitted with their own space frames in order to provide torsional stiffness. These, in turn, were welded to the race proven Healey chassis. Aerodynamic efficiency was improved further by having almost full undershielding. The front wings were cut away and between the front and rear wheels, the sides of the body curved inwards with the objective of improving air-flow to the brakes. These cars, which were painted in American white and blue racing colours, were prepared at the Warwick factory but entered in the name of the Nash Corporation. A single car was entered in the Mille Miglia for American driver John Fitch, but that car retired with a broken rear axle.

Both cars ran at Le Mans but in terms of engine performance the competition had moved on; the Nash Healey was left with nothing much more than a mildly tuned production engine that had never been particularly sophisticated to start with. One thing above all though, which the people at Nash could be very proud of, it had proved durable. Nevertheless, Leslie Johnson and Bert Hadley drove their car to 11th place which matched its race number 11. In the circumstances prevailing that year, this was a performance that many marques would have been proud of. Pierre Veyron and Yves Giraud-Cabantous retired in the second hour because of loss of oil pressure. It was the last time that Nash-Healeys would be raced by the Healey factory in Warwick; they had found another toy to play with and boy did they make the most of it! It’s worth recording that the 1953 Le Mans saw the debut of the Austin Healey 100 at that event, one of them, entered by the DHMCo., finished in 12th place, just behind the Nash Healey. 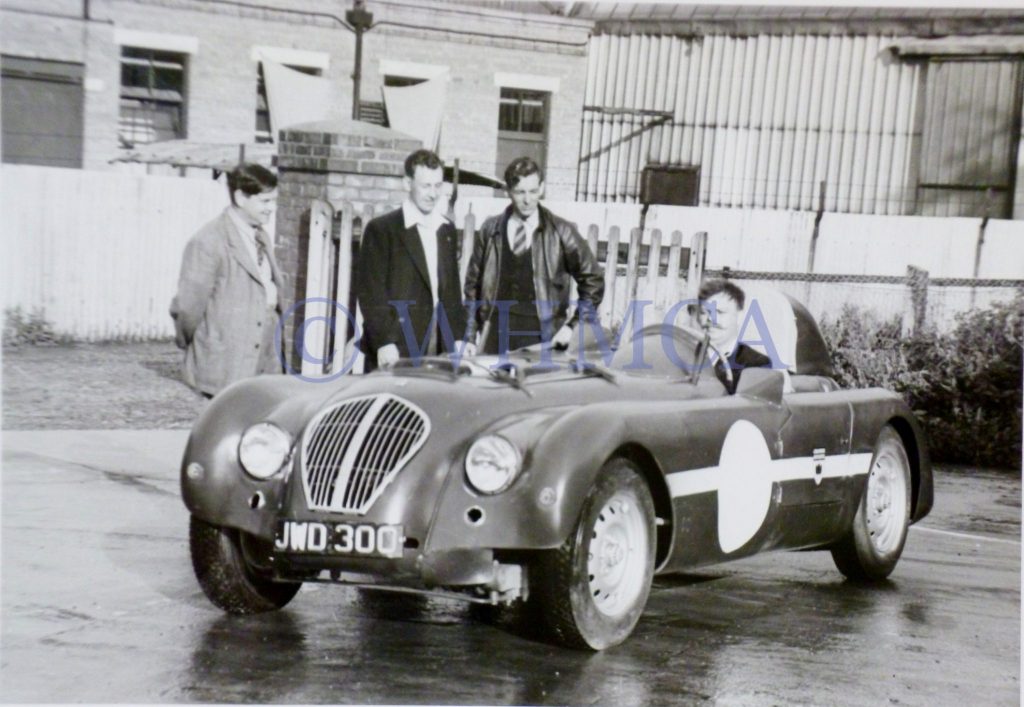 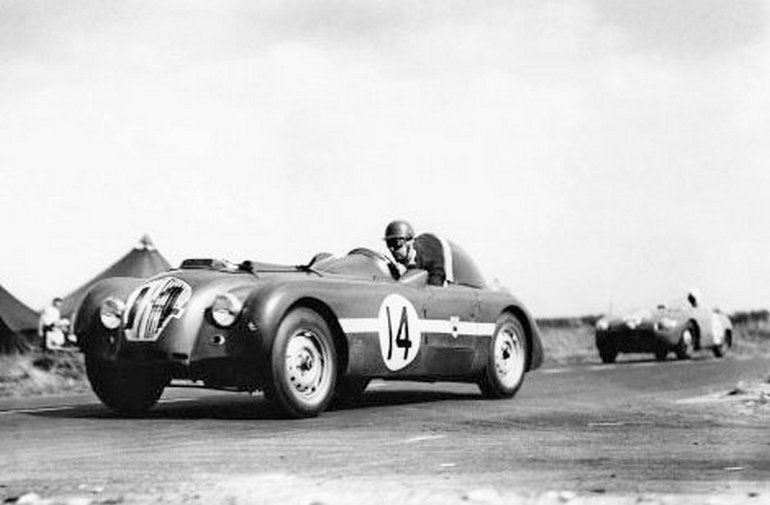 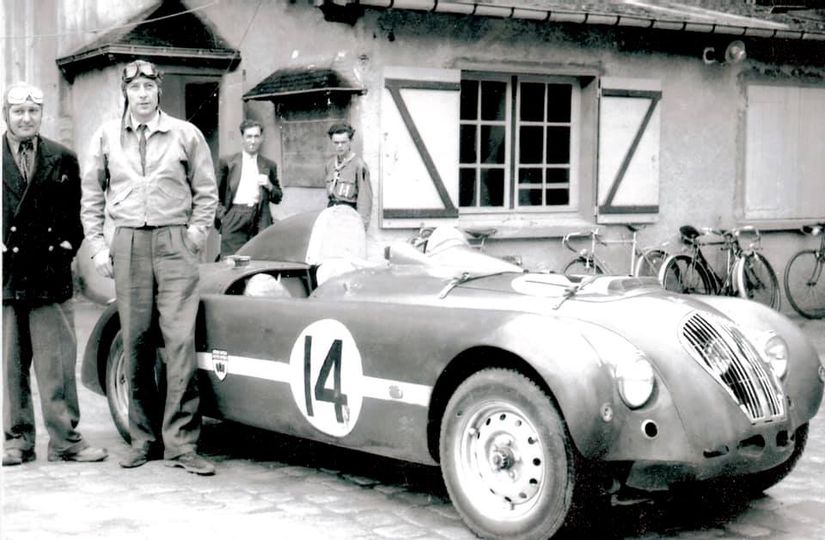 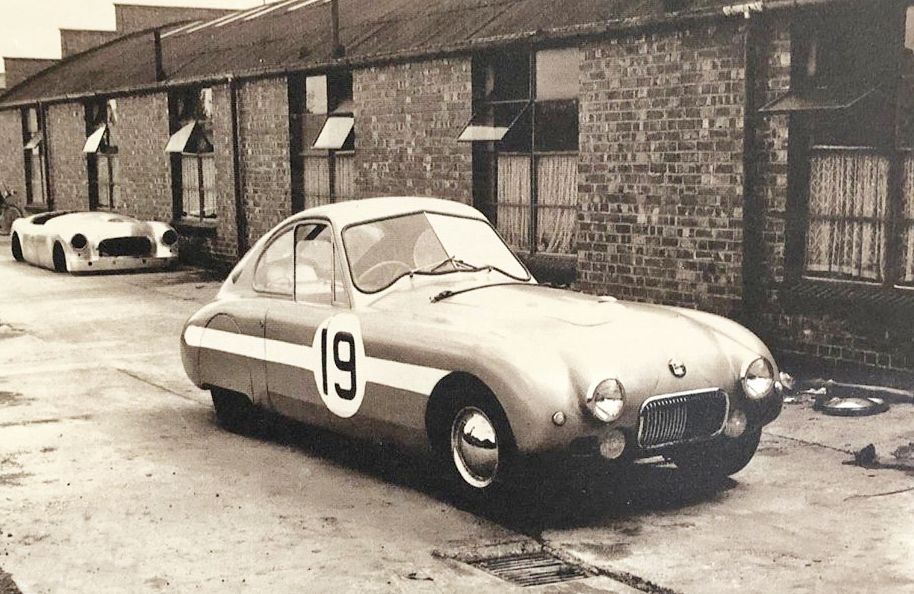 Nash Healey with the Coupe body used at LM 1951 at the DHMCo. Cape works. Photos courtesy of the Healey Museum. 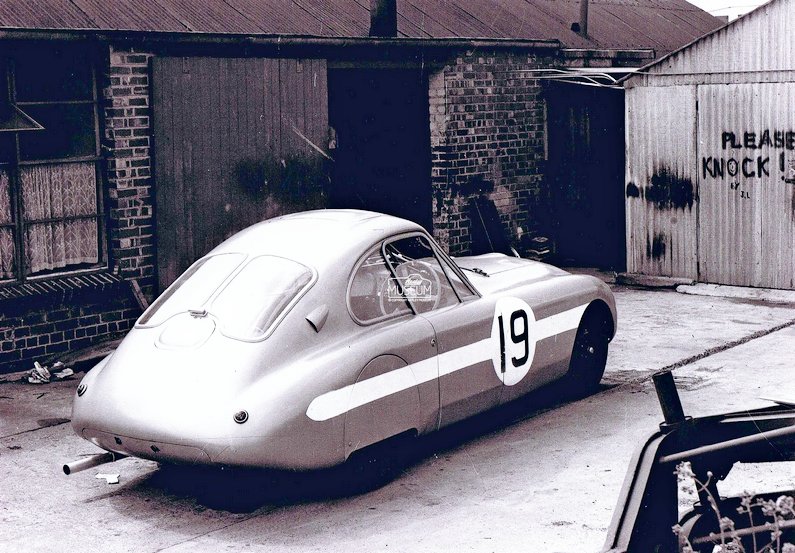 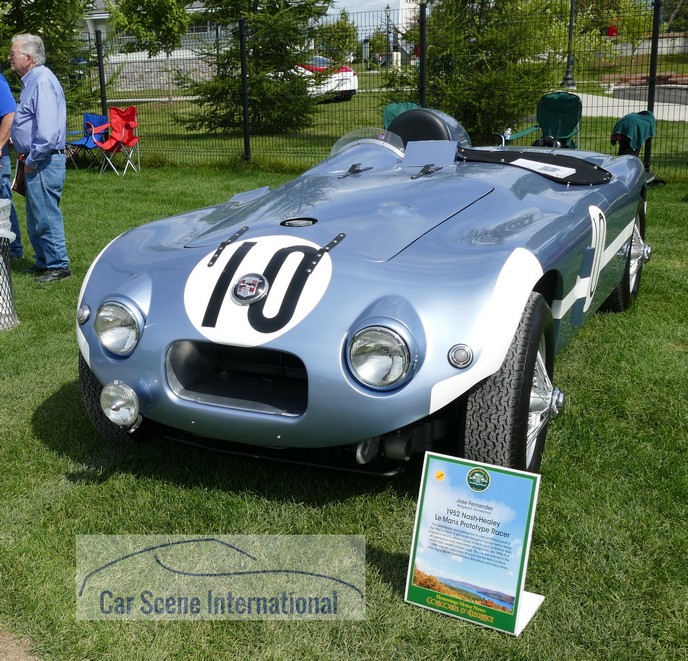 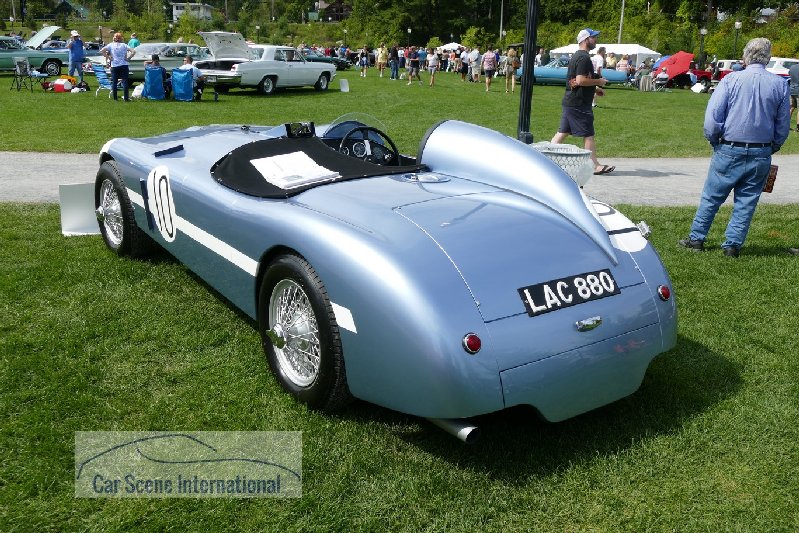 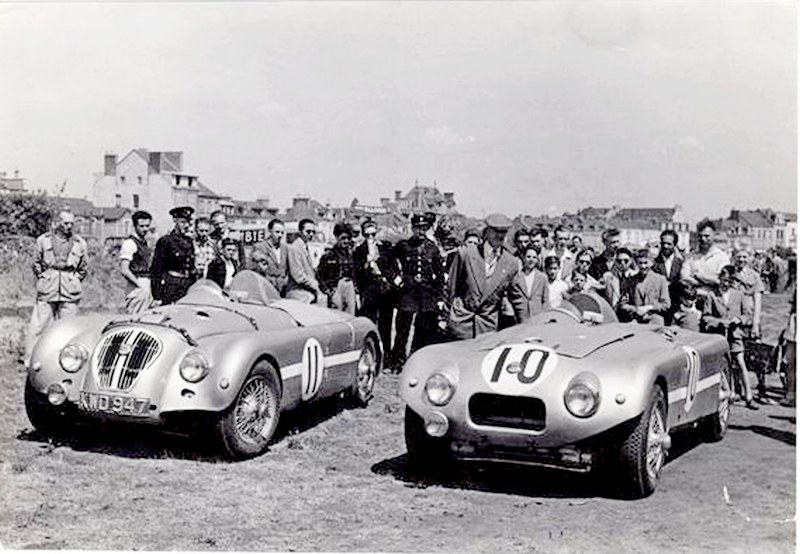 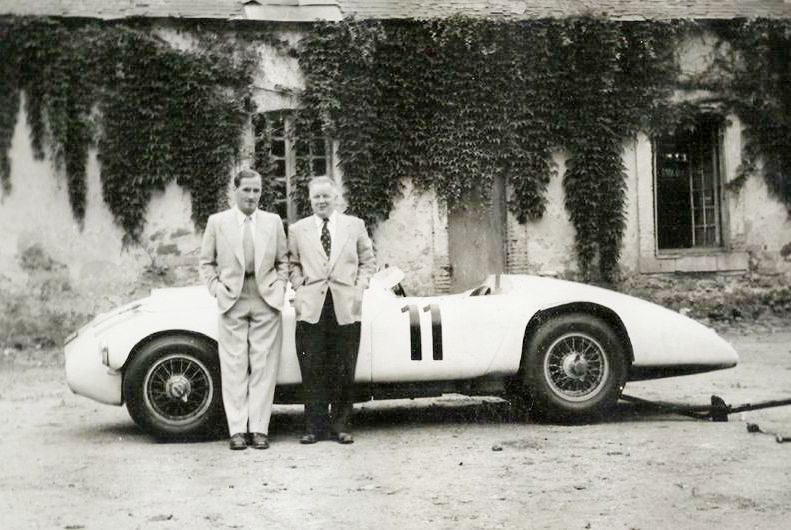 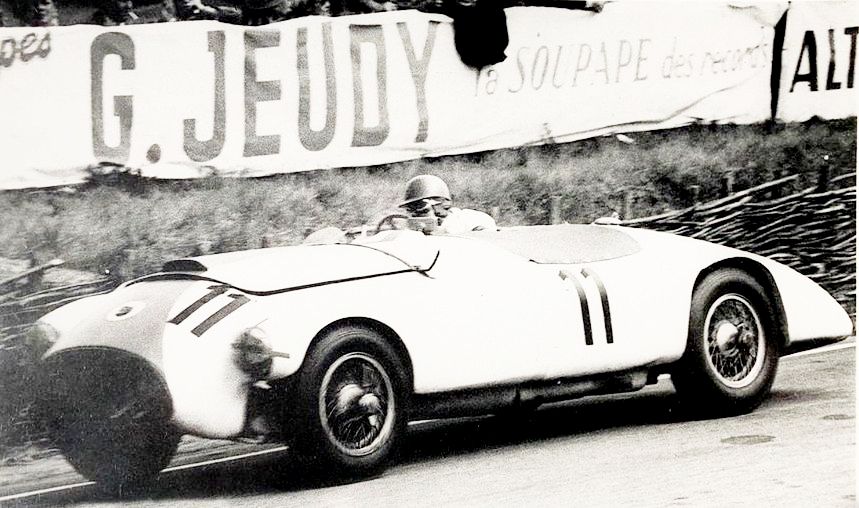 Have a look around Warren’s restored Nash Healey X5 car, courtesy of Classicmobilia.com –