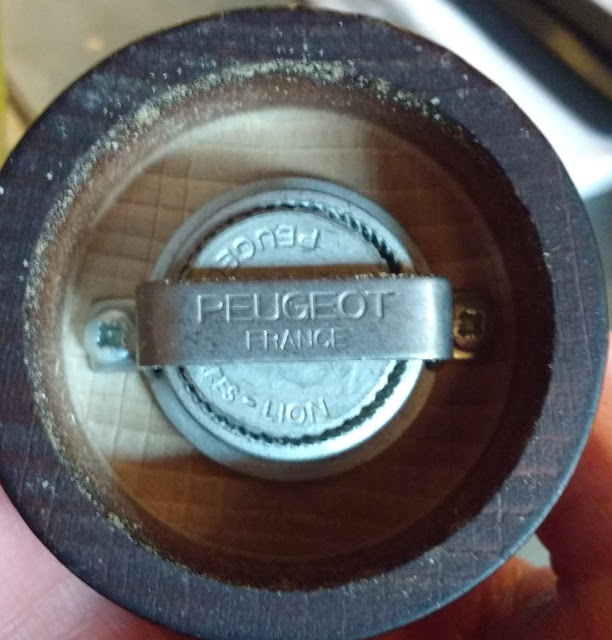 Where it all began – a Peugeot Table Pepper Mill

I was looking at some old photo files on my computer the other day and came across some
photos that I took when I attended the Peugeot Sport Official Owners Club* Pugfest meeting in July ’09. This was held at the Prescott Hill Climb venue. It ocurred to me that these photos would be of some
interest to visitors to this blog, so, you can see some of them below. For the full set you can visit the Youtube link shown at the end of this piece.
The reason I visited the Pugfest event in 2009 was, firstly, because I was doing some idle research on the internet just to see if the Peugeot 205 GTi Owners Club, that I was instrumental in starting in 1984 when the Peugeot 205GTi was launched, was still in existence. Secondly, when I found out that the successor to that club was not only alive and kicking but had continued to organise what we used to call the annual ‘National Convention’ (now called ‘Pugfest’), I thought that it was worth a visit.

How Peugeot’s GTi Club was born

Just a little background to how the original 205 Gti Owners Club was formed: I was working as the Peugeot marque product manager in the U.K. It seems strange to recall now but in the U.K. Peugeot was
the junior partner to the Chrysler (soon to be re-branded Talbot under Peugeot’s ownership) marque.
Peugeot had purchased Chrysler Europe (with factories in France (Simca), U.K.( Rootes Group – Hillman, Humber, Singer & Sunbeam) and Spain (Barreiros Trucks, Dodge Dart & Simca sub-assembly) in 1978.
However, in the U.K. Peugeot struggled to take 2.0% of the market with its,104, 305, 505 & 604 model range while Chrysler accounted for around 7.0% with its Sunbeam, Horizon, Solara and Alpine models. My job was to produce a ‘Marketing Platform’ on which the Sales and Marketing teams could base their strategies. I had already produced a similar document for the 205 when it was launched in the U.K. in 1983, to great acclaim and subsequent success. In 1984 I produce another ‘platform’ for the 205GTI.

This was a completely new market for Peugeot, in fact it was a niche market which had been
created by Volkswagen’s launch of the Golf GTI and then the introduction of Ford’s Escort XR3 and Vauxhall’s Astra GTE models.
The press referred to the cars which populated this niche as ‘Hot hatches’. Peugeot had established an enviable reputation as a constructor of durable and successful rally cars via the success of the 404 and 504s models in the East African Safari Rally in the 60’s and 70’s. But in reality this did not hold much of a cache for potential buyers of ‘hot hatches’ in the 1980’s. So from a marketing point of view we were
virtually starting from scratch.
The only reason for telling you this is to explain how the 205GTi Owner’s Club (the forerunner of the current Peugeot Sports Official Owners Club*) came to be formed. In putting together the ‘marketing Platform’ for the 205GTi I found myself speaking to Golf GTI and Escort XR3 owners to see what they expected from owning a ‘hot hatch’. I was amazed by the high level of involvement that these owners had with their cars. The general profile was men in their late twenties, early thirties. Most of them were married or had girlfriends but I got the impression that the car got more attention than the ladies in their lives. To be fair on the few occasions I spoke to the wives or girlfriends of these owners I found that they too had a great affection for the particular car that came with their man.
From this research I realised how important it was to make sure that the 205GTi bathed in the same glory as the Golf GTI and the Escort XR3, in other words to ensure that it also was seen as a ‘cult’ car. In reality I need not have been too concerned because the character of the car spoke for itself. The press fell in love with it immediately, as did everyone who drove one. In a very short time the 205GTi was challenging the Golf GTI for the ‘hot hatch’ crown. It was recognised that the 205GTi was the ultimate driver’s car but could catch out the inexperienced or less skilled driver with its rear end break away when cornering ‘in extremis’.
The Golf GTI was a little more forgiving, if a little less rewarding, as well as having the given attribute of Teutonic sturdiness. So it was a case of “you pays your money and you takes your choice” (for those readers for whom English is not their first language, this is an English colloquialism). One thing was for sure, the 205GTi had made its mark and by doing so had a very beneficial effect on the Peugeot brand
overall.
My perception of the profile of the likely purchaser of a 205GTi led me to write a paper which I sent directly to the Peugeot UK sales and marketing director, Todd Evans. This wasn’t normally the done thing
but I felt so strongly about what I had discovered regarding the owners of these types of car that I did not want the message to be diluted.

The birth of the 205 GTi Owners Club

To cut a longer story short, my paper got passed to the sales promotion department who in turn consulted a specialist sales promotion agency, De Brus Marketing, based in Leamington Spa, Warwickshire. They came up with the idea of forming a club especially for 205GTi owners. A year later, after another one of the somewhat frequent departmental reshuffles, I was appointed consumer programmes manager and one of my responsibilities was to manage, via De Brus Marketing, the 205GTi Owners Club.
In 1986 we organised the first National Convention for the club at Bruntingthorpe Aerodrome,
Leicestershire. That tradition continues today. It is now called ‘Pugfest’ and is held at the Bugatti Owners Club’s Prescott Hill Climb venue (see below). 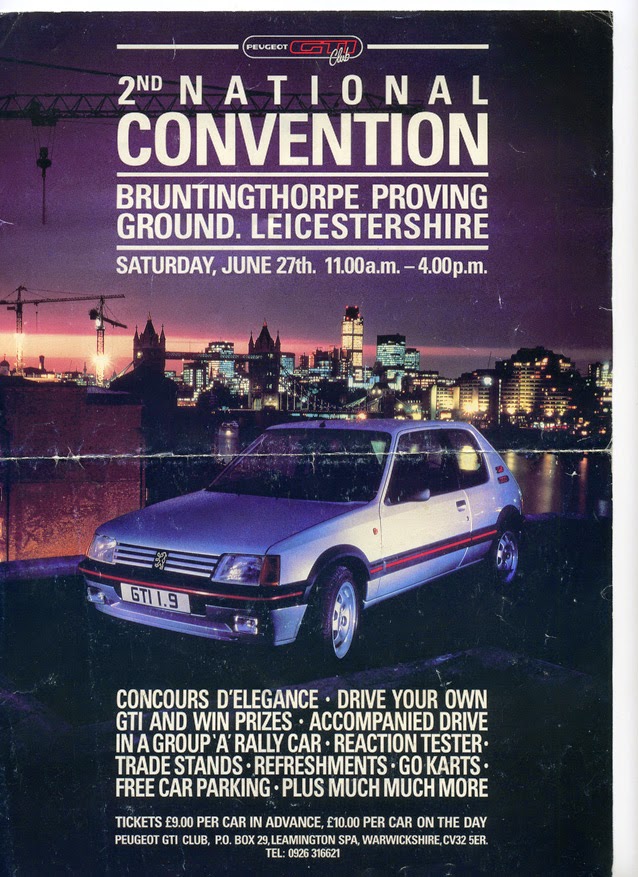 During my time of managing the club I introduced the Torque magazine which is still the club’s organ today. This was produced by a company based in Cardiff, Specialist Publications, founded by David McDonald. They also produced the Peugeot Rapport magazine which is also still extant. I was that magazine’s first editing director.
On Specialist publications staff at that time was Quentin Letts the well know journalist who currently writes primarily for the Daily Mail and Sally Osman who is now Director of Royal Communications based at Buckingham Palace. David could certainly spot talent!
Managing the GTi Owners Club was only one of my responsibilities as consumer programmes manager. It was a part of the job that I thoroughly enjoyed and was committed to but frankly it was not a function that my performance and worth to the company was measured by. That fact and the annual scrabbling for budgets led to me suggesting that we should encourage the members to take over the responsibility for running the club themselves. As I have said above there were some very able and committed people quite competent to do that.
The first Chairman of the club was Tony Munday aided and assisted by his then wife Pippa. They lived in Hemel Hempstead. As is the case today, there were many committed members who gave of their time, particularly in running regional meetings and events.
The rest of the story can be found on the Peugeot Sport Club UK website, the link is at the end of this post.

The annual ‘get together’ formerly called ‘The National Convention’ continues to-day, it is now called ‘Pugfest’. There have been several changes of name, both of the club* itself and of course, the stalwarts who have managed the club over the 30 years of its existence. Nevertheless, the main theme remains
intact; that is, the one of enabling owners of sporting derivatives of Peugeot models to join together in enjoying, to the maximum, the current love of their lives, wives and girlfriends (or boyfriends for
that matter) not withstanding.
I was very pleasantly surprised with what I found at the ‘Pugfest’ meeting that I attended in 2009. Firstly, it was very well attended, secondly, as one might have expected, the members I spoke to were both friendly and very knowledgeable; thirdly, the event was very well organised.
I came away with the distinct feeling that the original aim of the old Peugeot 205GTi Owners Club not only lived on but had been enhanced.
I am pleased to read, on the club’s website, that Peugeot U.K.’s head office at Pimley House, Coventry, is in the process of strengthening its ties with the club. In fact, as part of that stronger association, the club’s name has undergone another modification, it is now called ‘Peugeot Sport Club UK’*.
This has to be the right move bearing in mind the forthcoming launch of the 208GTi which, if
pre-launch press comments are to be believed, will be the true successor to the beloved 205GTi.
Here are some photos from the 2009 ‘Pugfest’ meeting – 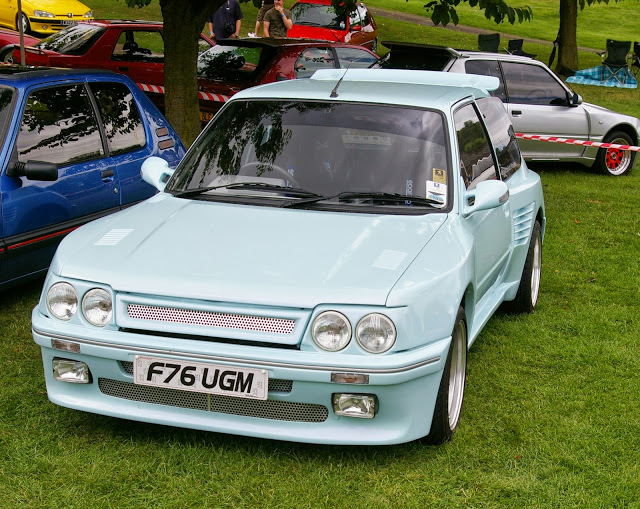 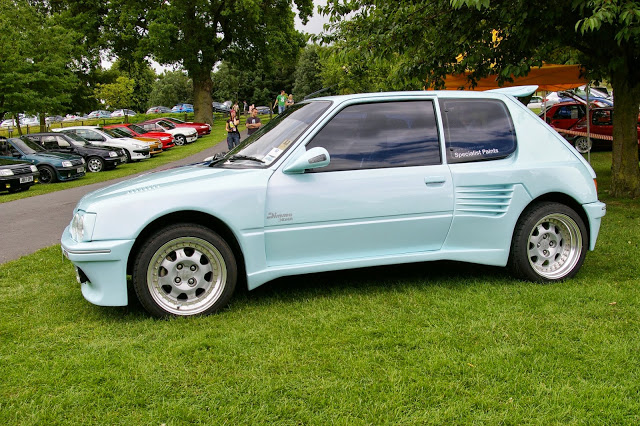 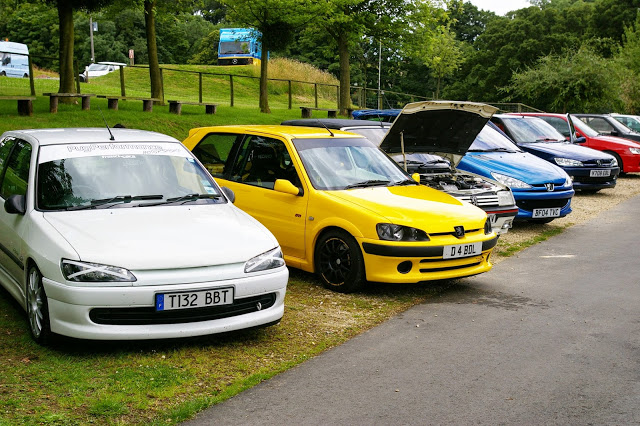 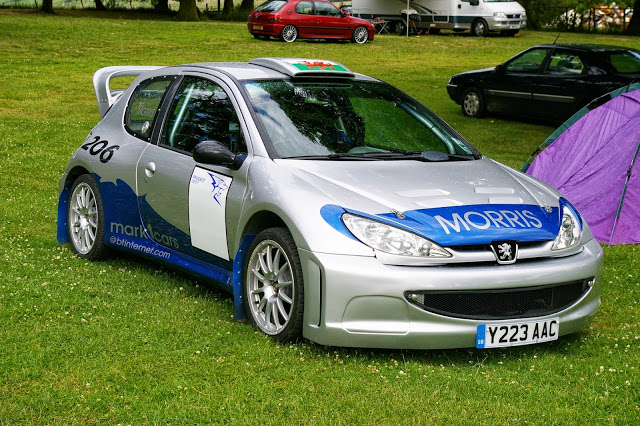 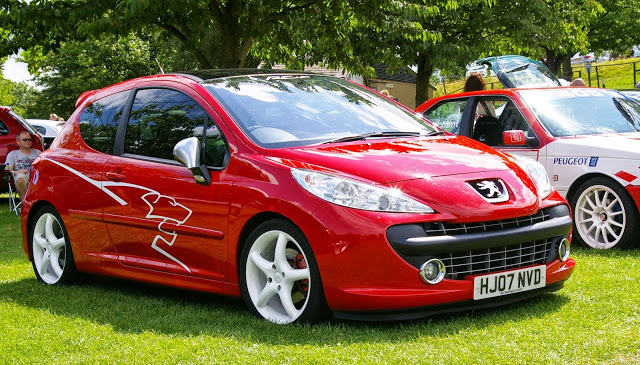 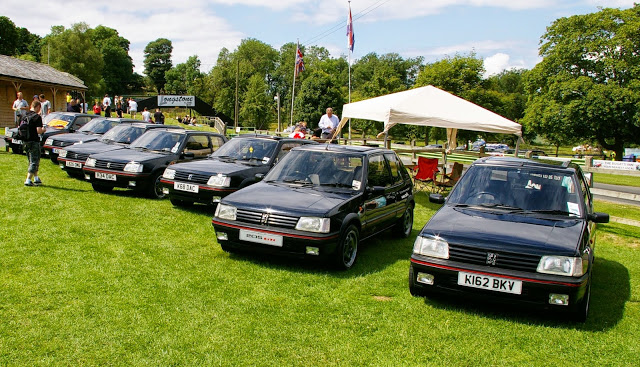 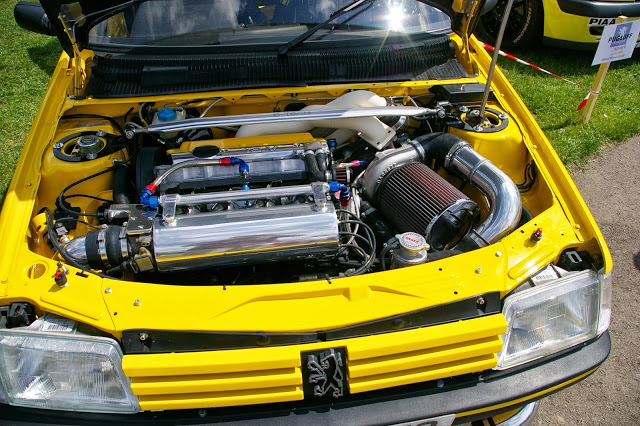 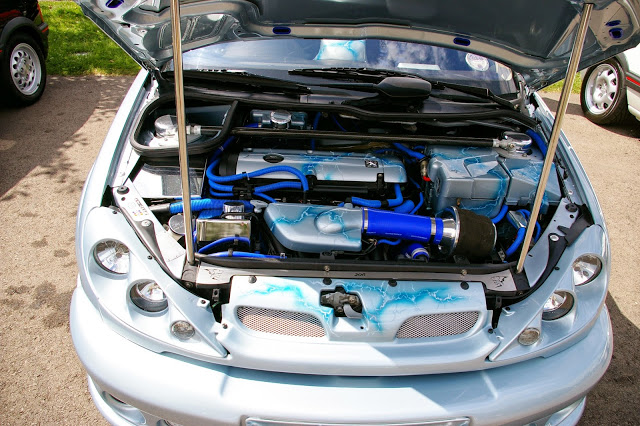 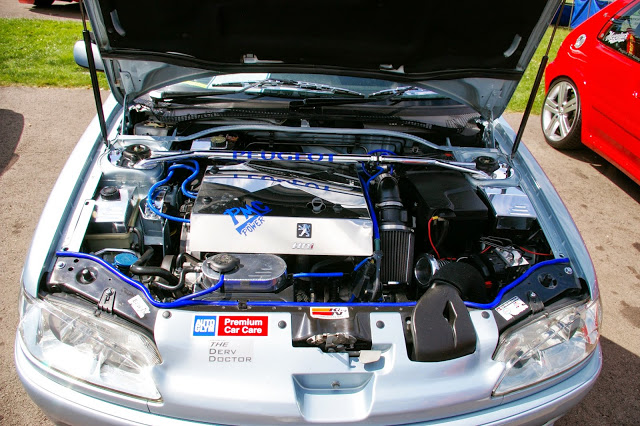 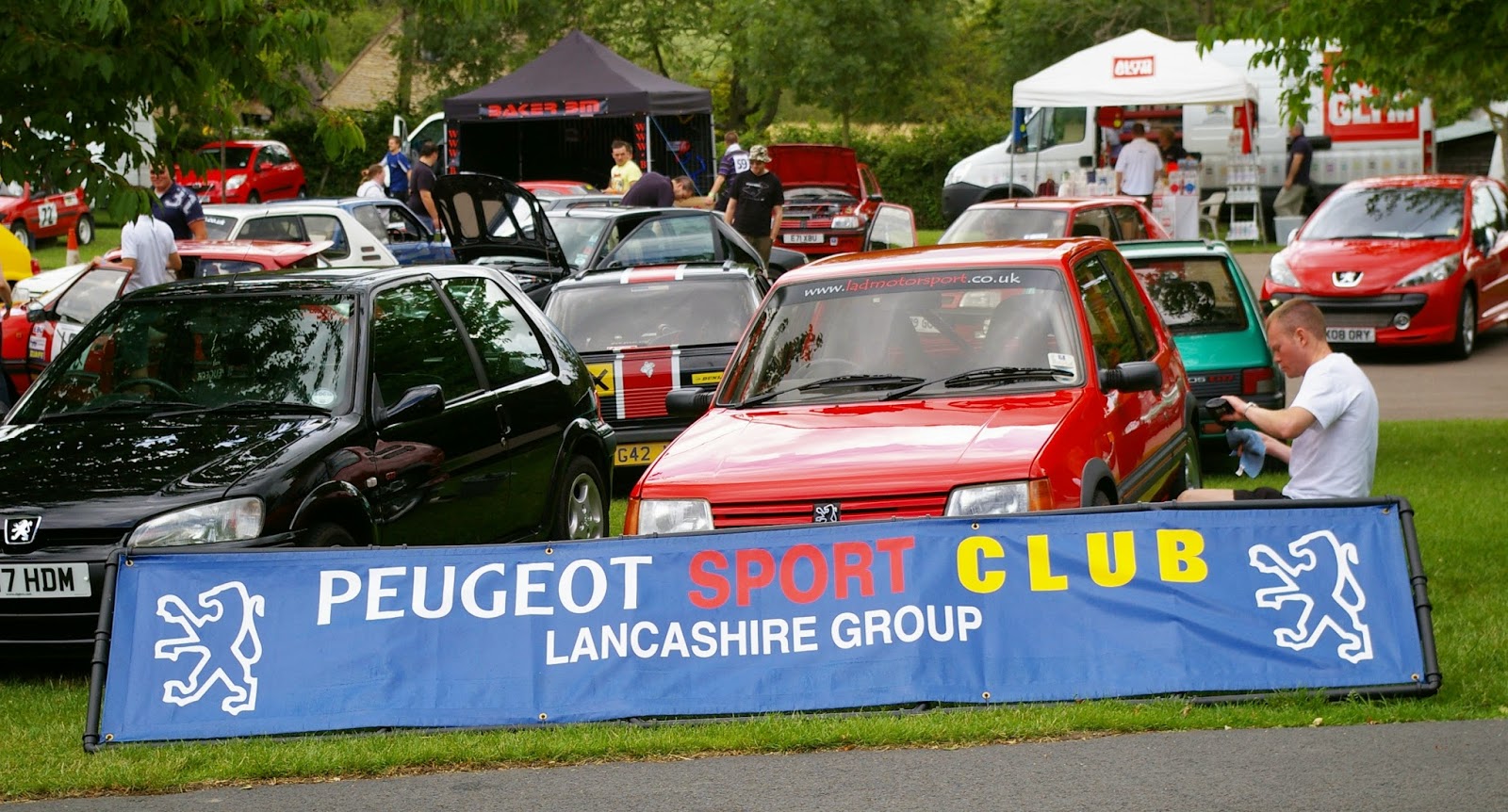 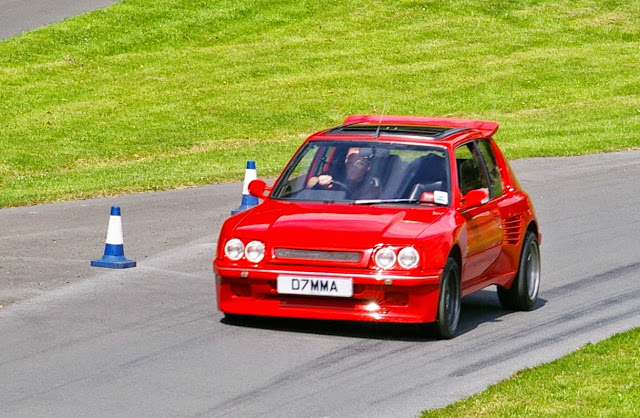 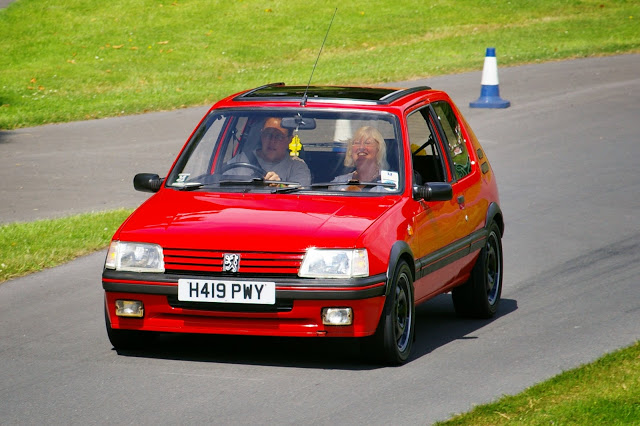 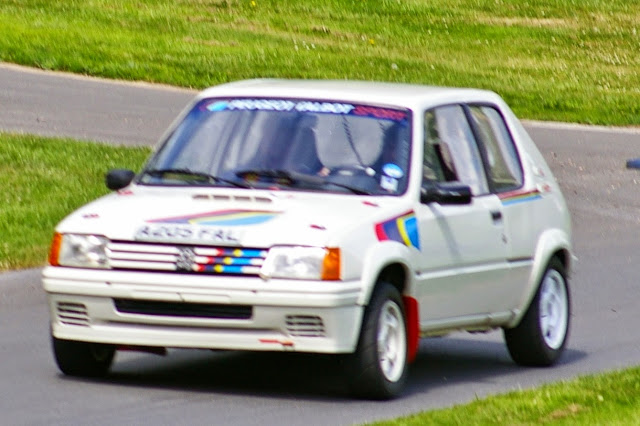 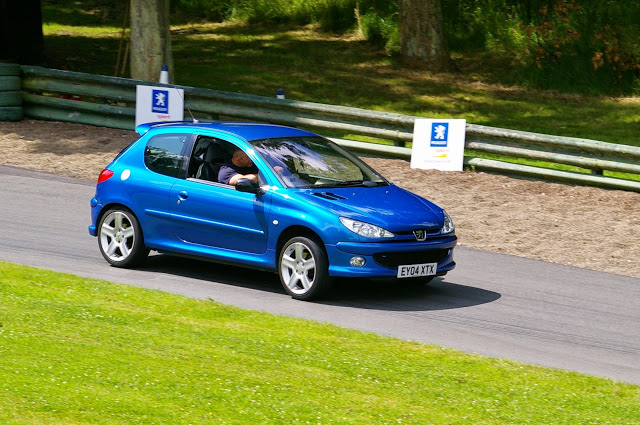 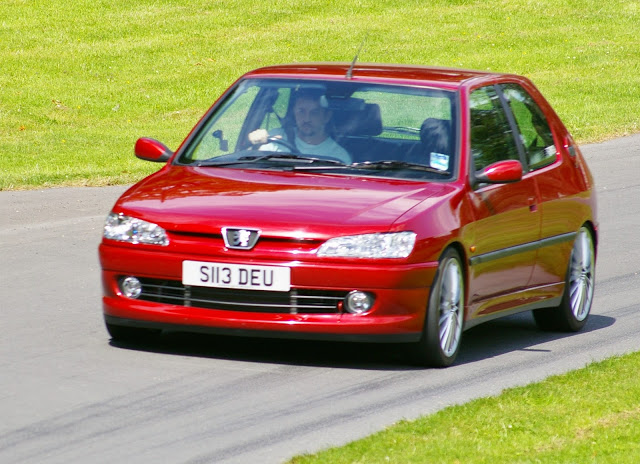 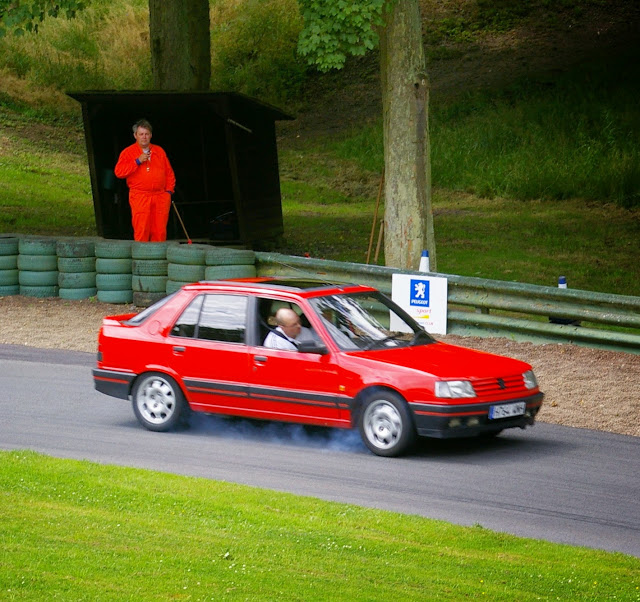 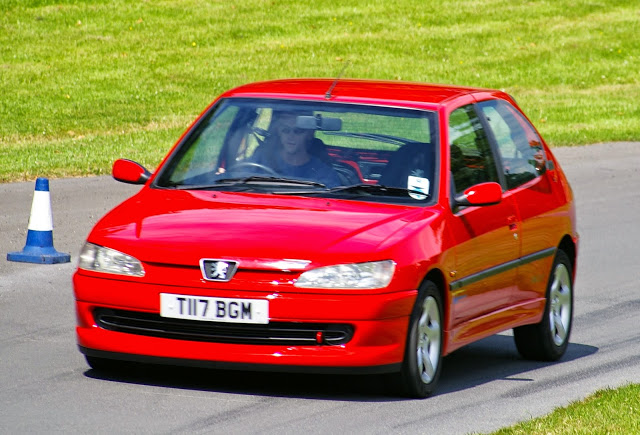 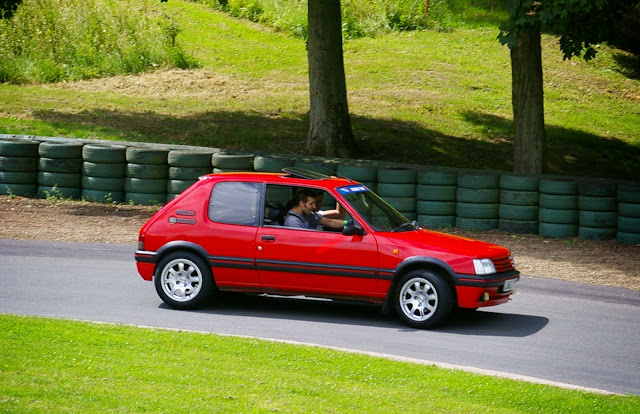 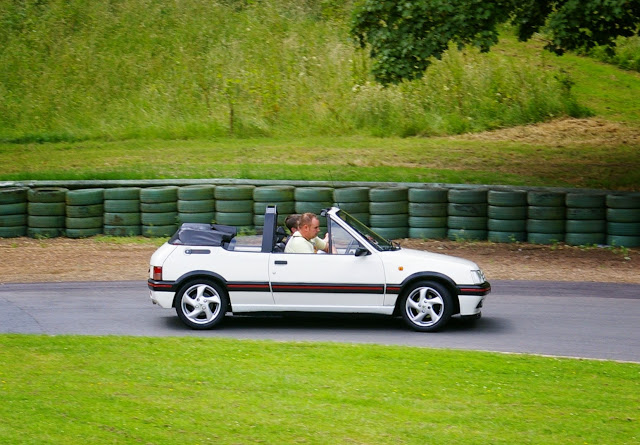 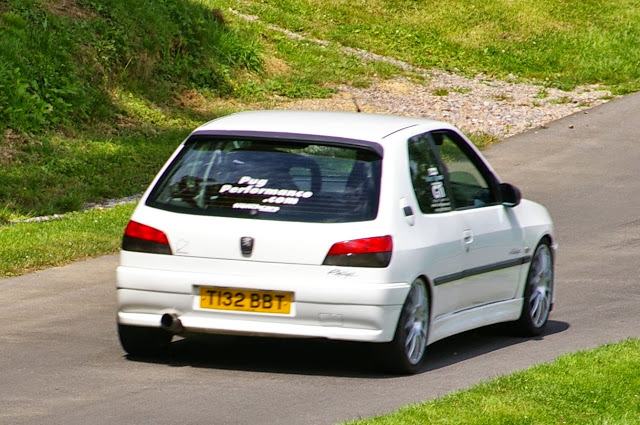