Recently (6 Dec. 2022) a friend sent me a link to an article first published in 2013 and reproduced in the December 2022 Classic Motorsport Magazine Newsletter. I am reproducing it here for the benefit of the Austin Healey enthusiasts who have subscribed to CSI. All credit for the article is entirely attributed to Robert Bowen, the original author. 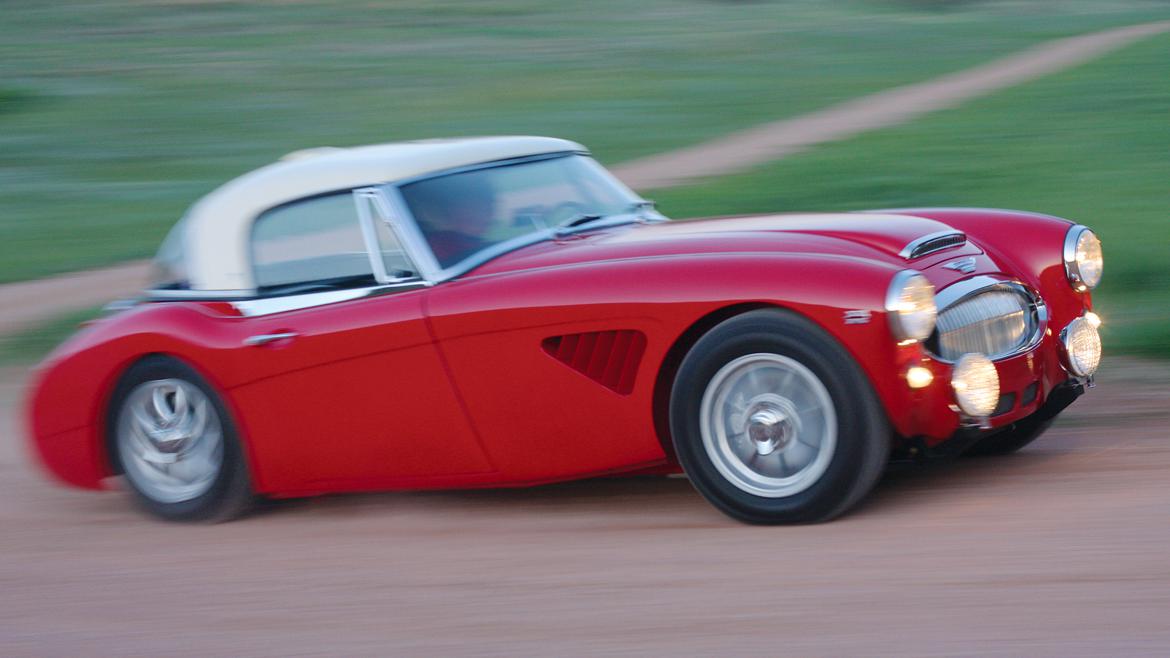 Steve Thomton has always had a soft spot for Big Healeys: He met and dated his wife while driving a Healey 100/6, and he has owned a few other cars from the famed builder over the years. His current one, however, is not just another restored driver. It’s a fuel-injected, resto-modded rally replica built with an obsessive attention to detail and an impressive list of modifications.

Looking at the quality of work that went into this 1963 Austin-Healey 3000 BJ7 and the level of comfort features added, it’s no surprise that Steve dabbled in traditional American hotrods for a number of years. His most recent project was a 1940 Ford done in classic hotrod style with a small-block Chevy. It was beautiful, too, and won a number of awards, including best paint at Denver’s Annual Thanksgiving Greybeard show.

But not having a Healey didn’t mean he wasn’t thinking about the cars. A family trip to the U.K. in 1992 started the wheels turning that resulted in Steve’s latest project. He was in Harrods department store and saw an issue of Car Classics magazine that featured Pat Moss’s works Healey on the cover.

“Jonathan Everard’s shop, JME, was taking care of it and running it in European vintage competition at the time,” Steve says of the legendary Healey rally racer. “So I decided to swing through Leamington Spa (since moved into part of the old DHMCo. “Cape Works” premises, Warwick CSI) and see it in person. Jonathan showed me around his shop, which was almost all Healeys, and let me look over Pat Moss’s car.”

The car made an even bigger impression in person than it had in the magazine, and Steve left with an idea of what he wanted to build–as well as critical photographs and tracings of some of the factory’s body modifications. These all went into a file back home in Colorado, where they would sit for a few more years. In fact, it would be almost 20 years from that trip until Steve finished his rally-inspired Healey and had it on the road. 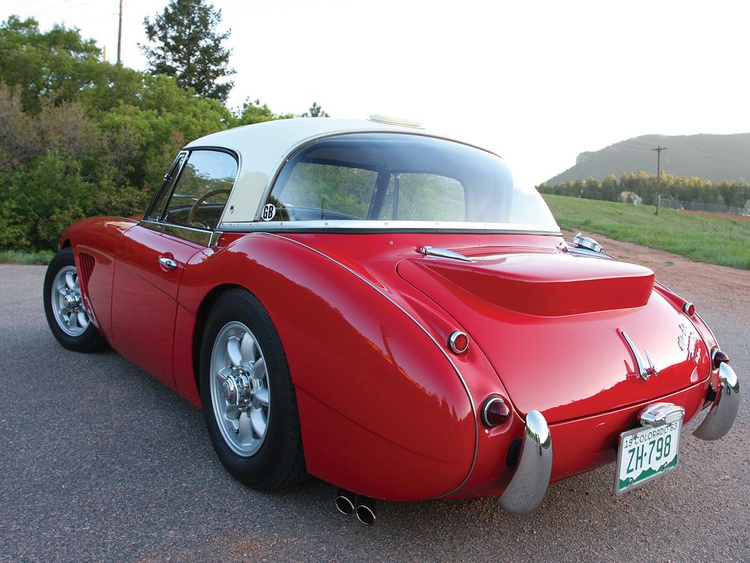 Thanks to the rarity of the components needed to build a works replica, Steve started collecting parts more than two years before he found the perfect donor car. First up was a hardtop, since the purpose-built rally cars were all so equipped.

“In my mind, if you are going to build a rally tribute car, it is going to have to have a hard top. They are hard to find, so I started looking for one right away. Finding the car was easier than finding the hardtop.”

Hardtop in hand, Steve began the search for the chassis needed to complete the project. It had to be complete, he explains, but not restored, and preferably rust-free. The right car showed up in San Jose, through the Healey magazine. Steve’s son was nearby and checked out the car.

“He said it looked okay, so I closed the deal and shipped it out here,” Steve recalls. “It was already partially disassembled, and so I never drove it as a stock car. The whole point was to build the rally tribute car, so I didn’t need to.”

The car had a bit of provenance, appearing on the sidelines during the Steve McQueen classic “Bullitt.” The car was originally white, and while an interesting story, Steve found that the brief appearance didn’t do much for the car’s value.

Running around with American hotrodders all those years gave Steve a good idea of what he wanted to do with this Healey. It was going to be more than a rally replica. It had to be a practical, usable driver with as many weak points addressed as possible.

Cramming modern technology and comfort into a small vintage car is more or less what traditional rod-builders do. Air conditioning, cruise control and modern audio are pretty much de rigueur in rodding circles, and Steve wanted the same for his Healey.

One of the biggest things on Steve’s wish list was fuel injection. “I had owned other Healeys, and I knew where the weak points are,” he says. “I knew I wanted the reliability of fuel injection to avoid the fuel pump issues, the carburettor issues, and all the other problem stuff that gives Healey owners pause.”

For the next three years, the car sat untouched—but that doesn’t mean that work had stopped. Steve was busy searching out some of the more esoteric works replica parts needed for his project, like the double-bump trunk and the side vents.

Steve found reproduction parts that were manufactured in small batches in the U.K. As the parts arrived, he checked them against his reference materials taken from the Pat Moss car. Not everything matched up.

“The reproduction side vents I bought were about 1 inch larger than the rubbing I took from Pat Moss’s car, so Brad Aregood, who did the bodywork, cut them down to the right size,” Steve explains. After Brad finished the bodywork, Steve sprayed the red paint.

Other parts, like the period-correct rally seats, were modified to suit Steve’s own preferences. The seats were cut down by 2 inches and fitted with new padding. The seats, door panels and the rest of the interior was upholstered in butter-soft black leather by Auto Weave Upholstery, a shop located near Steve in the Denver metro area.

The engine was rebuilt and fitted with a custom-ground BJ8 camshaft with a few mods. The biggest divergence from factory specification —and the one that took the most work—was the addition of a custom fuel injection system hidden under the intake.

“At a local cruise, I met Ric Navarro, who had a Model A running three deuces that hid fuel injection,” Steve recalls. “He does fuel injection conversions, and so he helped design a system for the Healey. It would have been simpler to just put a manifold with injectors on it, but I wanted to hide them under the carburettors”: simple to describe, difficult to implement. Starting with a reprogrammed General Motors ECU, Ric and Steve had to engineer the entire system. Some of the modifications brought about others, like the injector spacers required behind the SU carburettors. Since the carburettors were now spaced farther out from the engine, they got in the way of some of the frame structure, which then had to be relieved slightly.

Other modifications were no less involved. GM sensors had to be adapted to the Healey engine and hidden wherever possible. The distributor was one of a kind, as a GM six-cylinder unit was machined to fit the Healey block. “All of those little modifications are pretty transparent at this point, but they took a lot of work,” Steve explains. “Getting the injection done took two years.”

Fitting air conditioning behind the factory dashboard also turned into a major production. The same goes for the audio system, the five-speed transmission, and even the cruise control. All of these, and many more, are smoothly integrated into the factory-appearing interior. At first glance. Almost none of them is visible at first blush.

Underneath the car, a bright red chassis distracts the eye from many more small modifications: The fuel system’s lines are hidden inside the frame rails. An extra pair of Bilstein dampers have been mounted horizontally to control rear axle twist, and Steve built his own retro skid plate from 1/4-inch-thick aluminum stock. 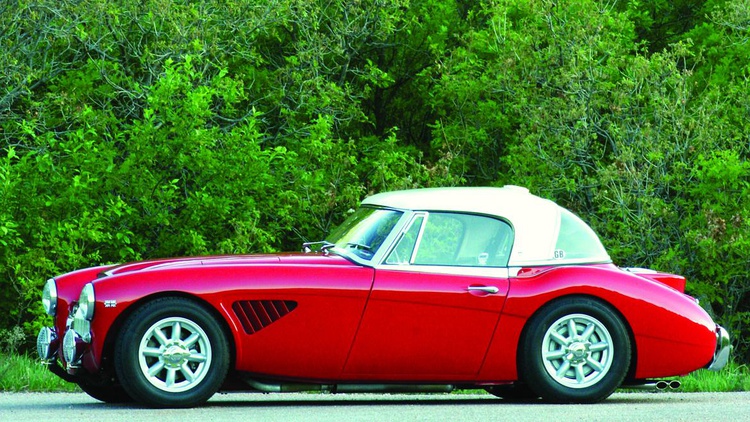 Of course, no project like this is ever done, and Steve has a long list of small projects to keep him busy. But he is not afraid to drive the car hard despite all the hard work that went into it. For our photo shoot, he gladly flogged it on the dirt roads around his house to show that it wasn’t just for static display.

In an interesting turn of events, the very first Healey Steve owned—the one from college—is now back in his garage. It now belongs to his son, who was inspired by the construction of Steve’s hotrod.

Steve’s brother had restored and still owned the Healey, so finding it wasn’t too hard. “When my brother decided that the Healey didn’t need to take up space in his garage anymore, my son said the car can’t leave the family,” Steve recalls. “We have pictures of him when he was 18 months old in the driver’s seat. Of course, my brother gave him a good deal.”

With a stock Healey and an all-out modified one taking up space in the garage, it feels like old times for the Thomton family. These are likely not the last Healeys their garage will see.

Patrick Quinn read this CSI article and he drew my attention to the fact that he had published an article on this car in the October/December 2021 edition (No.30) of the Australian Austin Healey magazine. In that article, Patrick interviewed Ray Hick, the Australian who, together with his wife Fay Bryant, currently owns this car. It is a totally absorbing story, not just about the Steve Thomton car, I recommend that you try to get a copy of that magazine.