In 2013 a number of my posts, unexpectedly, featured the Austin Healey 100/3000. The trigger for this was me being provoked into wanting to draw peoples’ attention to the role that Jensen Motors Ltd. had played in both the manufacture and development of that car.

In the early months of 2014 I thought to myself “why am I giving so much time to Healey and not to Jensen which is part of my DNA, due to me being employed by that company during the formative years of a life-long career in the automotive industry?”

So this is the post which corrects that situation. Some may ask “how does such a post fit in with the theme of this blog which is ‘The serendipitous encounter with rare and interesting cars’?
The rare and interesting elements are covered by all that Jensen represents in the automotive world but what about serendipity? There are very few car enthusiasts who do not know about Jensen.

Yes, like me, before undertaking research for this post, car enthusiasts would be aware of the Jensen 541 models, the Interceptor, the ground breaking FF and the Jensen-Healey; they may even be aware of the pre WWII ‘S’ and ‘H’ models and even the limited production, post WWII, ‘PW’ model. But what about all the ‘specials’ that the Jensen brothers designed for other people prior to building cars that carried their name?

I certainly wasn’t aware of them until now and discovering them fulfills, for me at least, the ‘serendipity’ requirement of this blog. Note:– The carsceneinternational.com website started as a blog with the title ‘serendipity twin-cam’. Its aim was to share my unplanned encounters with classic and rare cars with people who are interested in classic cars. This article was written as one of those blogs hence the explanation.

I hope that you enjoy this re-acquaintance/discovery of the Jensen cars as much as I did in putting this post together.

This post only deals with the cars created by the Jensen brothers. Alongside the car business ran a very successful and innovative commercial vehicle business. That story is told elsewhere but not by me.

Alan (b. 1906) and Richard (b. 1909) lived in Bloomfield Road, Moseley, Birmingham U.K. when they built their first Austin 7 (Chummy) based special in 1928. Soon afterwards the family moved just around the corner to Anderton Park Road, where the second special, based upon a Standard 9 chassis, was conceived and built. This design was adopted by the Standard Motor Company with the production cars being built by Avon Coachworks of Warwick where Alan Jensen was employed to oversee final design and production.

One of the Jensen’s near neighbours, in Anderton Park Road, was Ronald ‘Ron’ Tombs Horton, the successful MG Midget and Magnette competitions driver. They lived at number 95 he lived at number 45.
He got the Jensen brothers to design and build special bodies for some of his cars (see below).
As a result of doing research for this post I found out that Ron Horton was a director of Mitchells and Butler, a well known Birmingham brewer. His grandfather played a big part in the development of Birmingham in the 19th Century. A tradition which continues today via the family firm, Horton Estates limited, a private property development company based in Birmingham. But that is another story altogether!

Despite that snippet about the Horton family I do not intend this post to be a ‘blow by blow’ history of the Jensen  brothers progress during their early years which led to them taking over a commercial vehicle body building company, W.J. Smith & Co., Carters Green, West Bromwich in 1934. It has all been done before.
If you really want to get ‘under the skin’ of this topic then you could do no better than read Richard Calver’s book ‘All the Models’.

What I want to do here, for my own interest and hopefully for the interest of visitors, in this post, is to feature as many of the cars as possible that Alan and Richard were responsible for creating in one way or another.

Having done this research I cannot help coming to the conclusion that, if, at the end of their lives they had to say which was the best part, they would elect for the prewar years.
That is just my opinion having seen all the cars they created at that time and also being aware of how difficult things got when dealing with volume production contracts, for other marques, in the 50’s 60’s and 70’s.

Michael McEvoy, after leaving his employment with Rolls Royce in Derby, started making motor cycles and then cars. His specialty was in tuning cars to make them go faster. One of the ways he did this was to fit a Zoller Supercharger. You can see that the Star below is fitted with one. In addition to modifying standard cars he started to build his own specials using a variety of proprietary chassis. He contracted Jensen to design and build the bodies for these cars. Here are just a few examples. 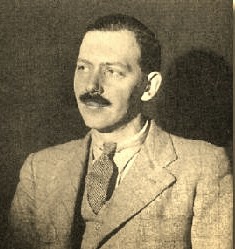 Note – Colonel Michael McEvoy, as he was to become during WWII, was responsible for causing the damaged Volkswagen factory at Wolfsburg to be rebuilt.
He had previous knowledge of the Kubel Wagen as a result of working for Mercedes in Germany in the late 1930s and saw that it had potential. He assigned Major Ivan Hirst to the task of getting production restarted. The rest,as they say, is, momentous, history. 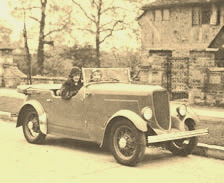 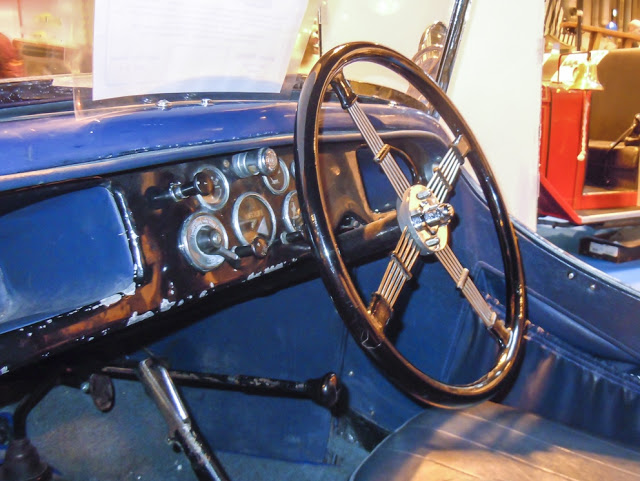 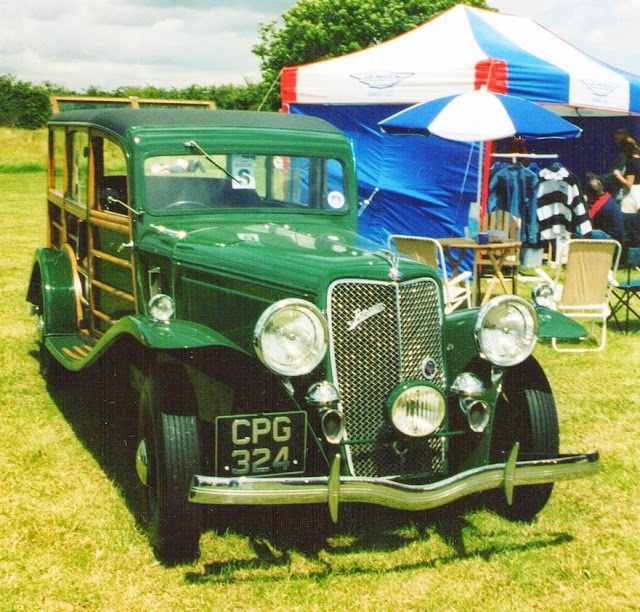 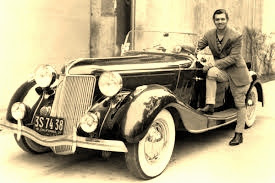 Which led to this – The car built for Clark Gable, one of two built at the time. He didn’t take delivery of the car but agreed to pose for publicity photos. This car led to a contract with Ford to build a small quantity of cars to a similar specification ………………… 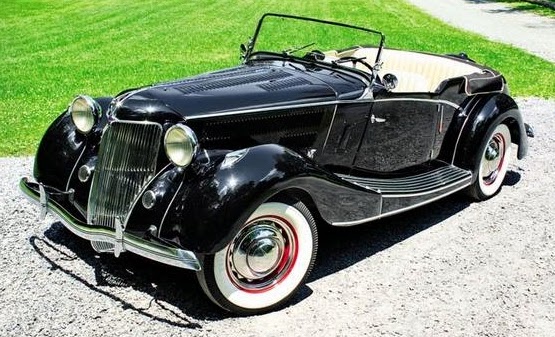 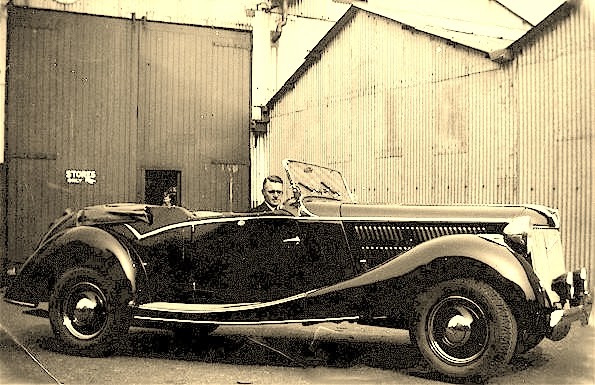 J B Stevenson, Jensen Company Secretary in a 1936 Jensen Ford

at the Carters Green Factory 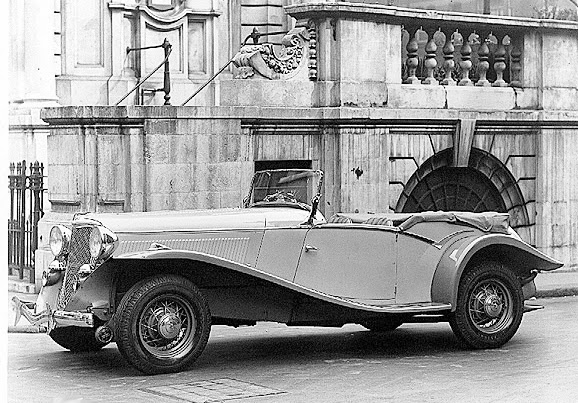 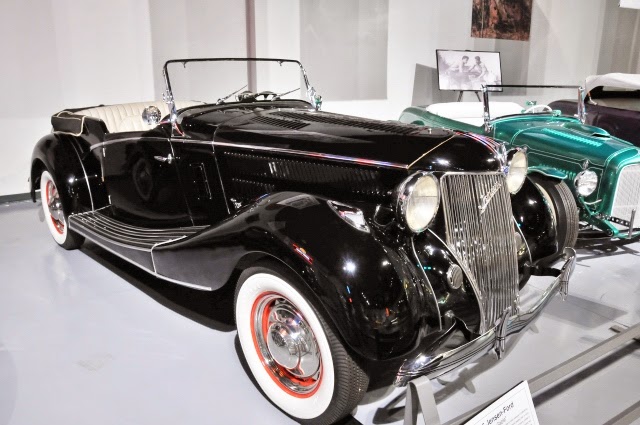 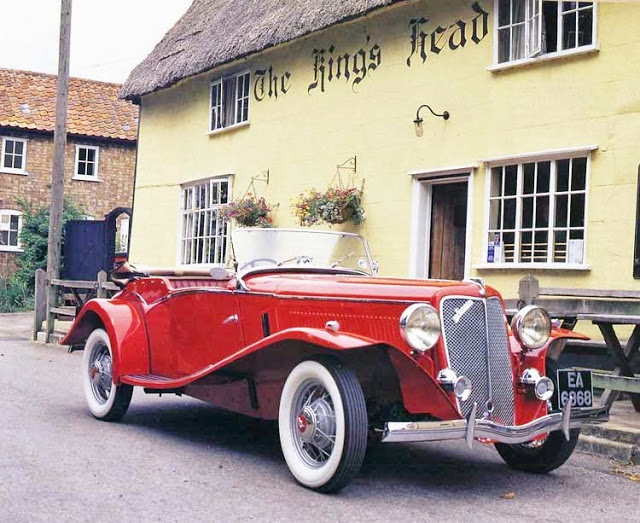 Which then led to this – the first car carrying the Jensen badge, nicknamed ‘The White Lady’. It was based upon the same Ford chassis and engine etc. as the Ford specials. 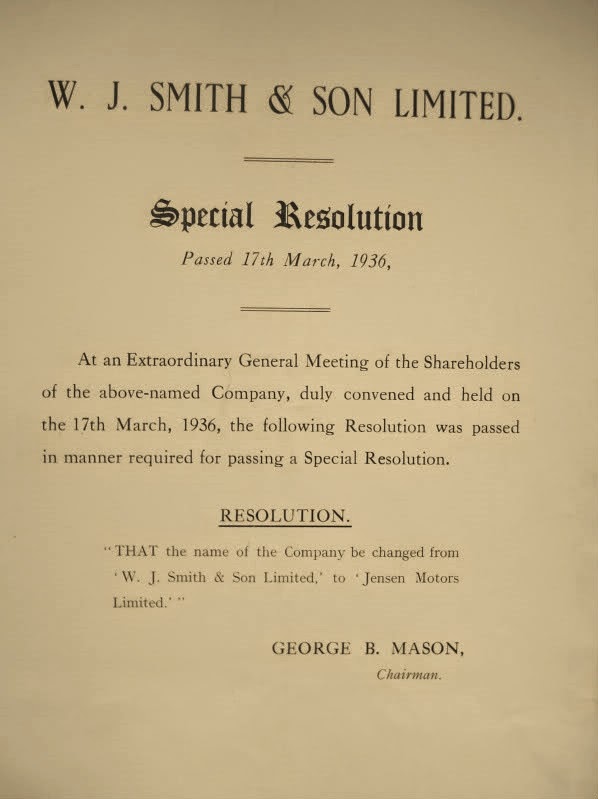 Which then led to series production of the ‘S’ model 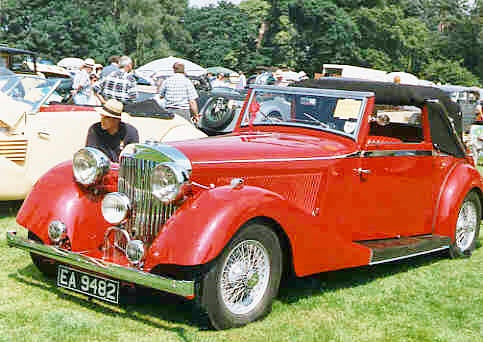 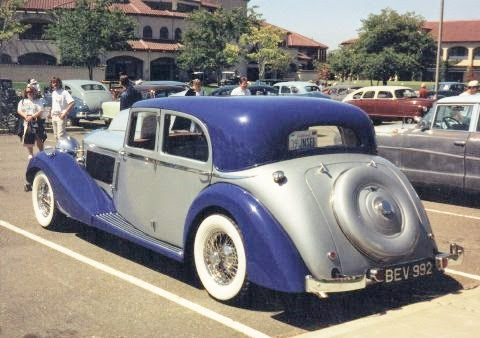 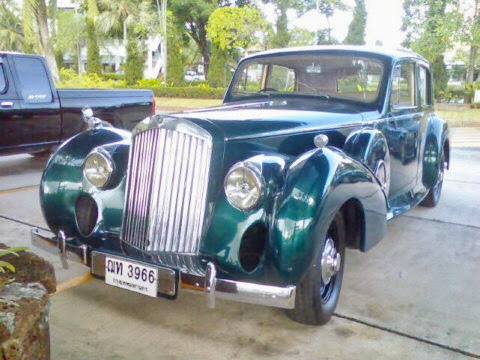 PW (for ‘Post War’) model 1946, most with 4.0Ltr. Austin straight 6cyl. engine with modified ‘H’ model chassis. The car in the photograph was used by the British Embassy in Bangkok. 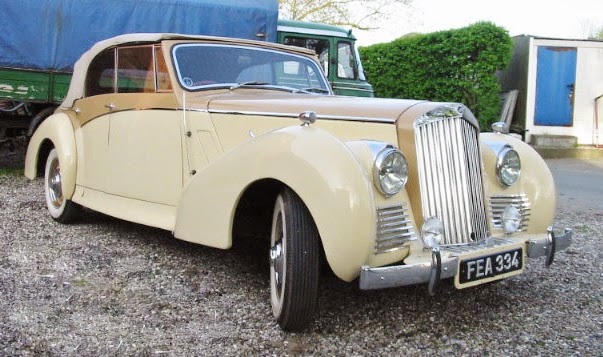 While we are talking about Jensen factories here is another of Felix Klister’s plans, aided and abetted by yours truly. This time it is of the Kelvin Way factory where, after 1955 the Austin Healy 100s and 3000s body/chassis units were assembled. This is also the factory where the Volvo 1800, Sunbeam Tiger Jensen C-V8, Interceptor, FF and Jensen-Healeys were built. 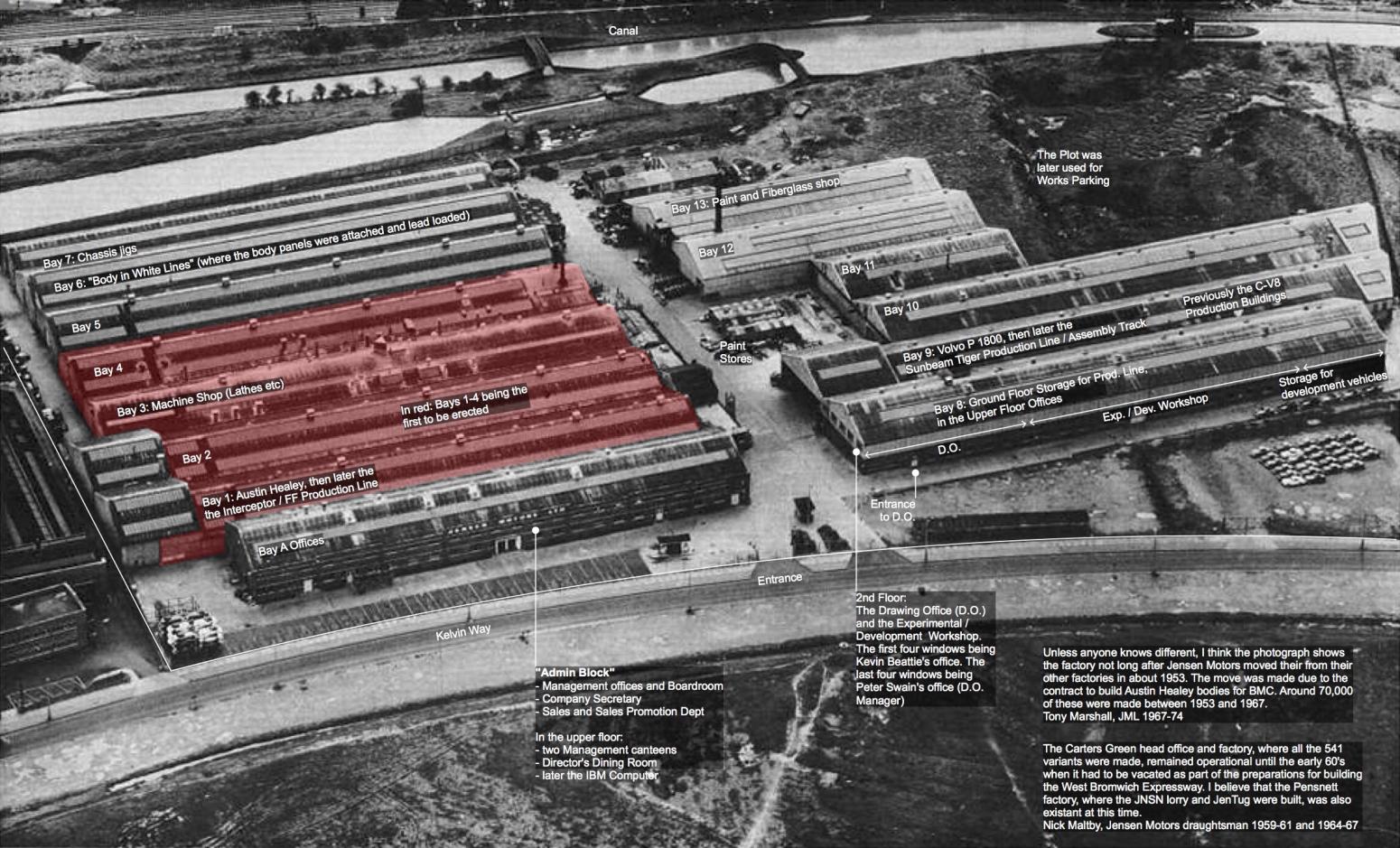 541 1955 – 1957 with Austin 4.0Ltr. engine and Jensen twin, 4.0in. O.D.,centre tube chassis. It had a Moulded fibre glass body. One of the 541’s unique features was the adjustable front grille panel which improved the cars, already exceptional, aerodynamic efficiency at high speed. The modified ‘541 R’ had more pronounced rear wheel arch mouldings, similar to but smaller than the ones at the front (see photo below) mechanical differences between the 541 and the 541R included all round disc brakes and rack and pinion steering (the 541 had a cam and roller steering box). 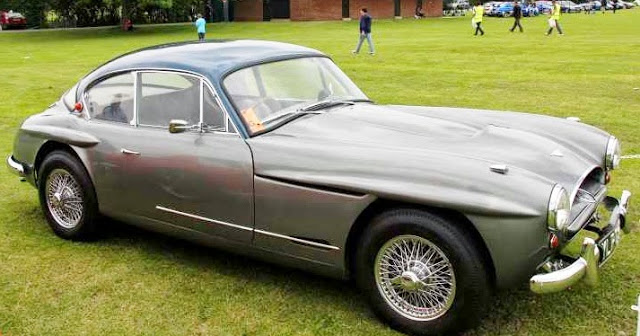 There were two cabriolet versions of the 541 built by E D Abbott of Farnham, Surrey, England. It is believed that they are both in existence. Here are a couple of photos – 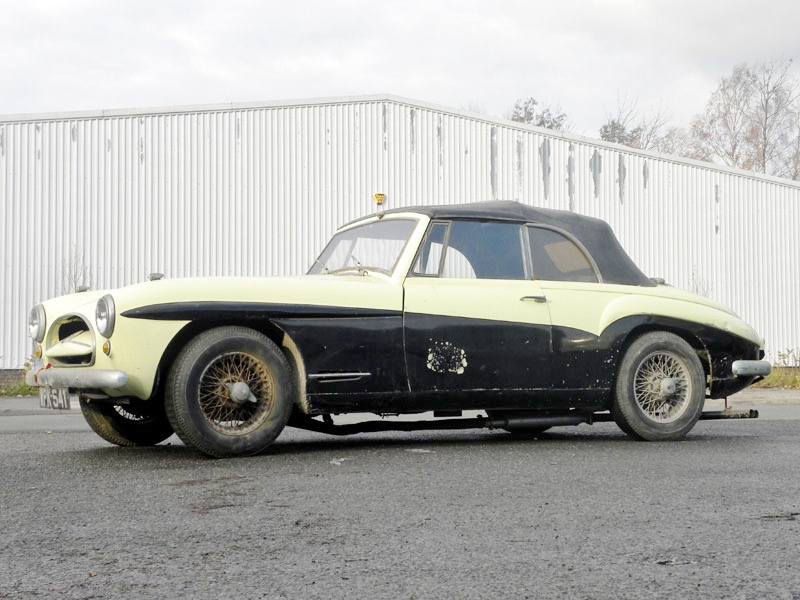 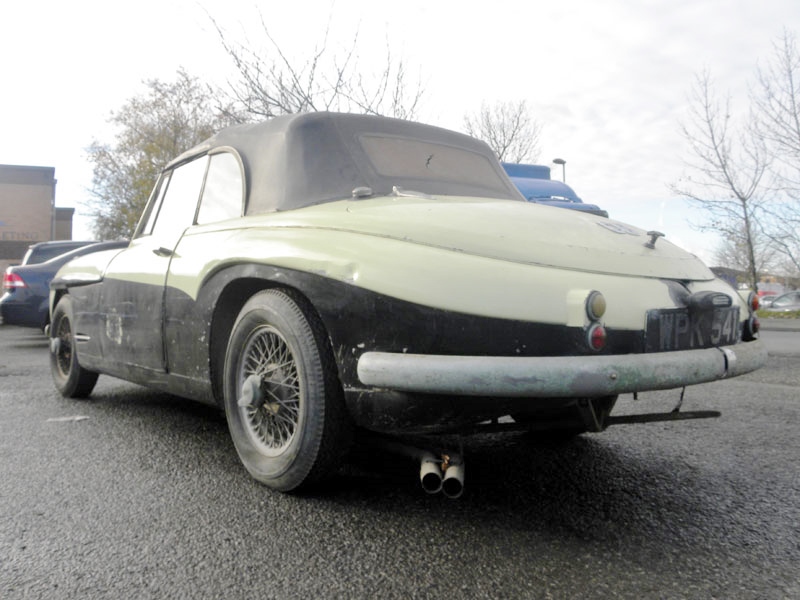 I saw this car at Cropredy Garage, the Jensen restoration specialists, in c.2009 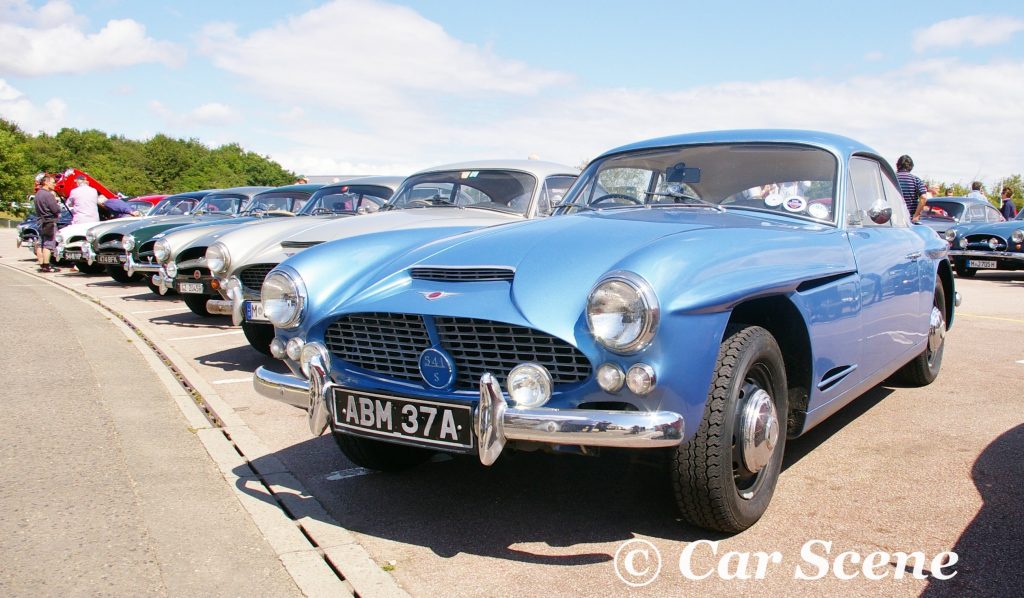 541S 1960 – 63 Four inches wider than the 541R still fitted with the Austin 4.0Ltr. engine but modified for extra performance by Jensen. This was mated to a GM designed Hydramatic gearbox supplied by Rolls Royce.

A small number of 541Ss were fitted with a Chrysler V8 engine but the most notable V8 engined 541S was the one owned by Donald Healey. Donald’s bought a standard 541 S and fitted it with a ‘short block’ 327 cu.in. Chevrolet V8 at his ‘Cape’ works in Warwick

Note the conventional grille which replaced the aero flap used on the previous 541 models. Although the general profile of the body is similar to the 541and 541R there are many detailed differences such as the side light/indicator assemblies, front and rear and the bonnet panel with air scoop is completely new.

Although not realised at the time, the C – V8 was to be the last of the Eric Neale designed fibre glass bodied cars built by Jensen 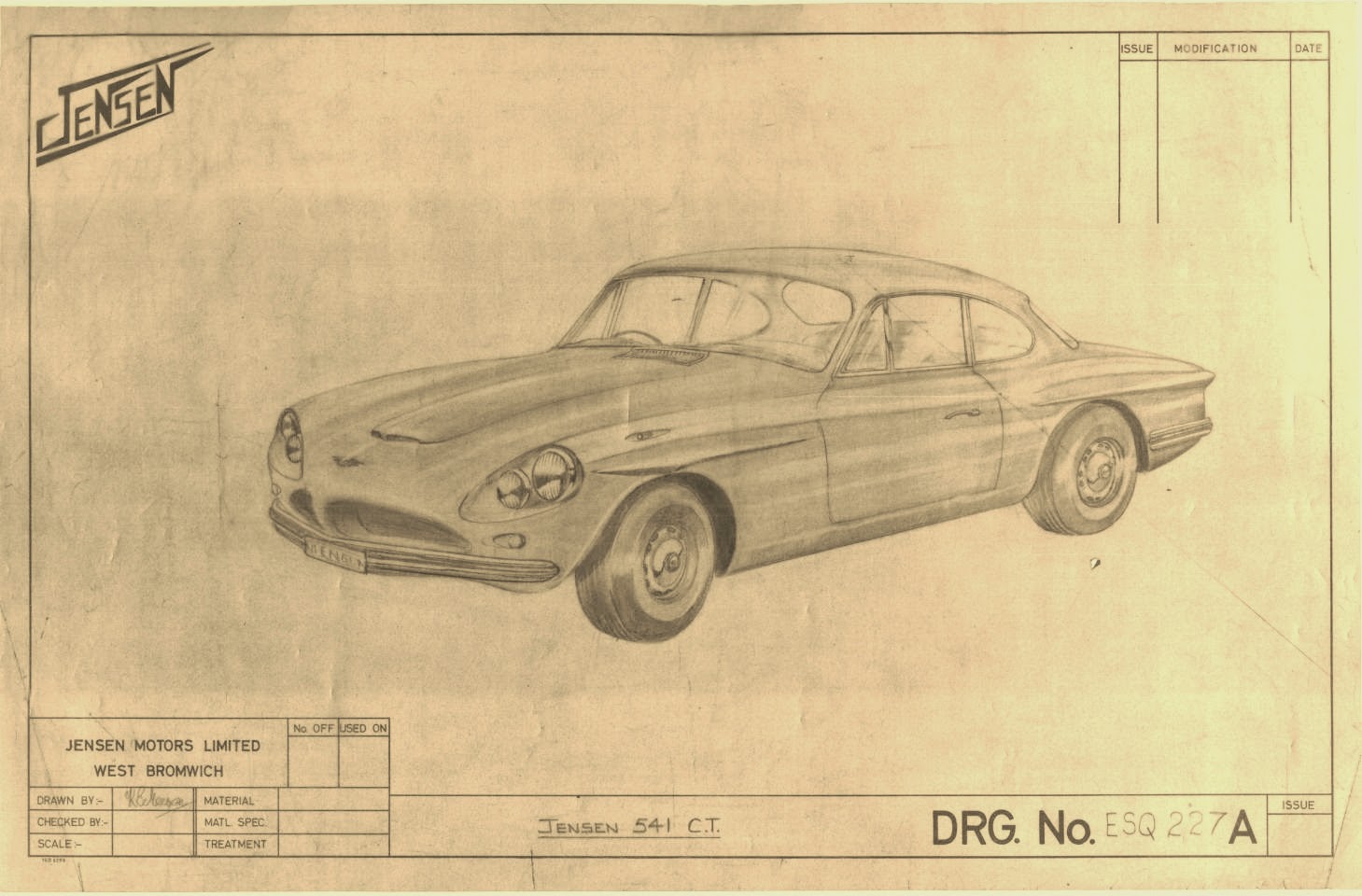 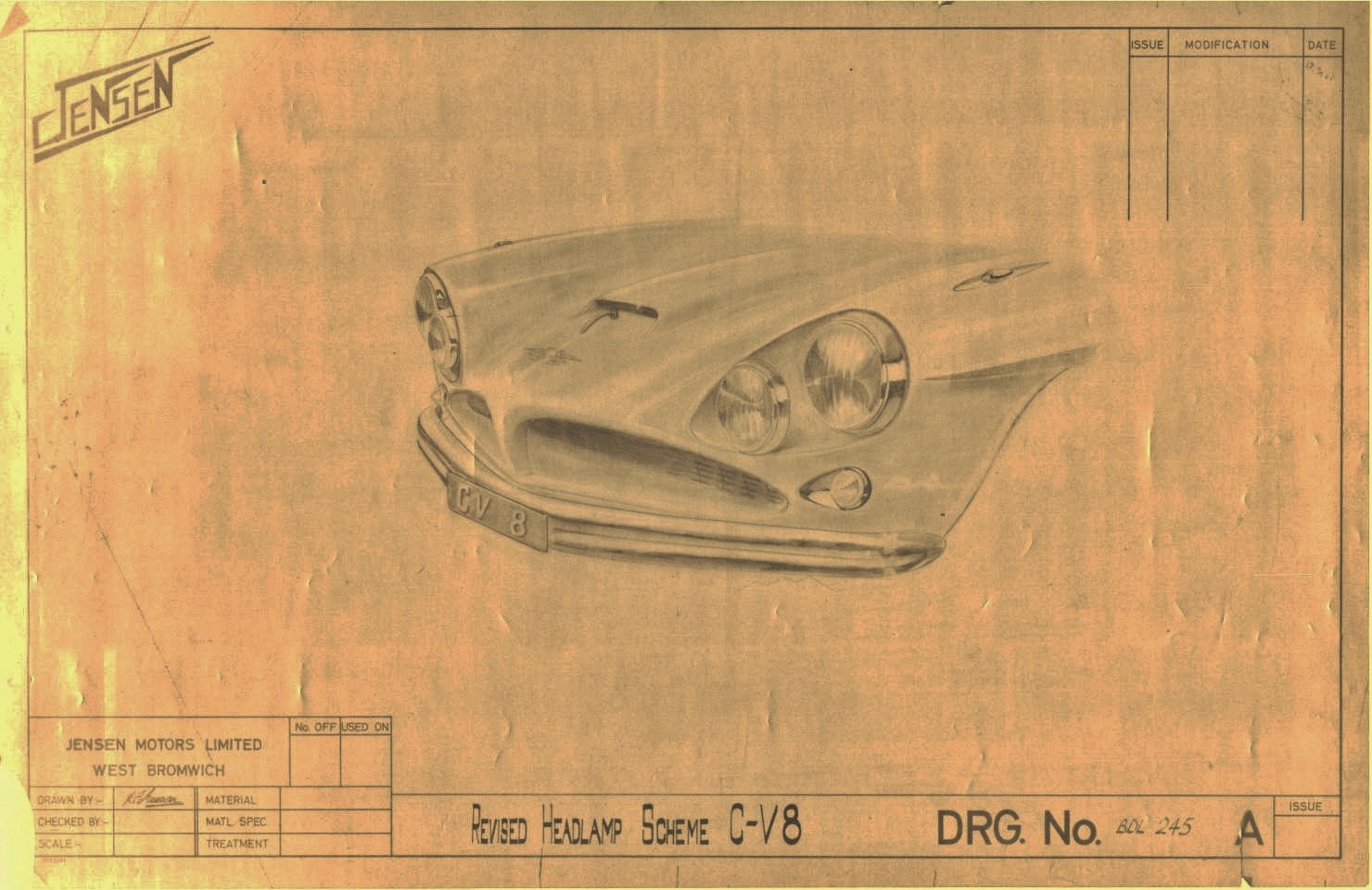 When people think of Jensen’s famous FF model the Touring styled car similar to the Interceptor comes to mind. However the first Jensen to be fitted with the Ferguson Formula four wheel drive transmission was a C-V8, albeit only one car was built, for experimental purposes. That car was on the Jensen stand at the 1965 London Earls Court motor show along with the a cabriolet version of the ill fated ‘P66’. Here is some further information on that car – 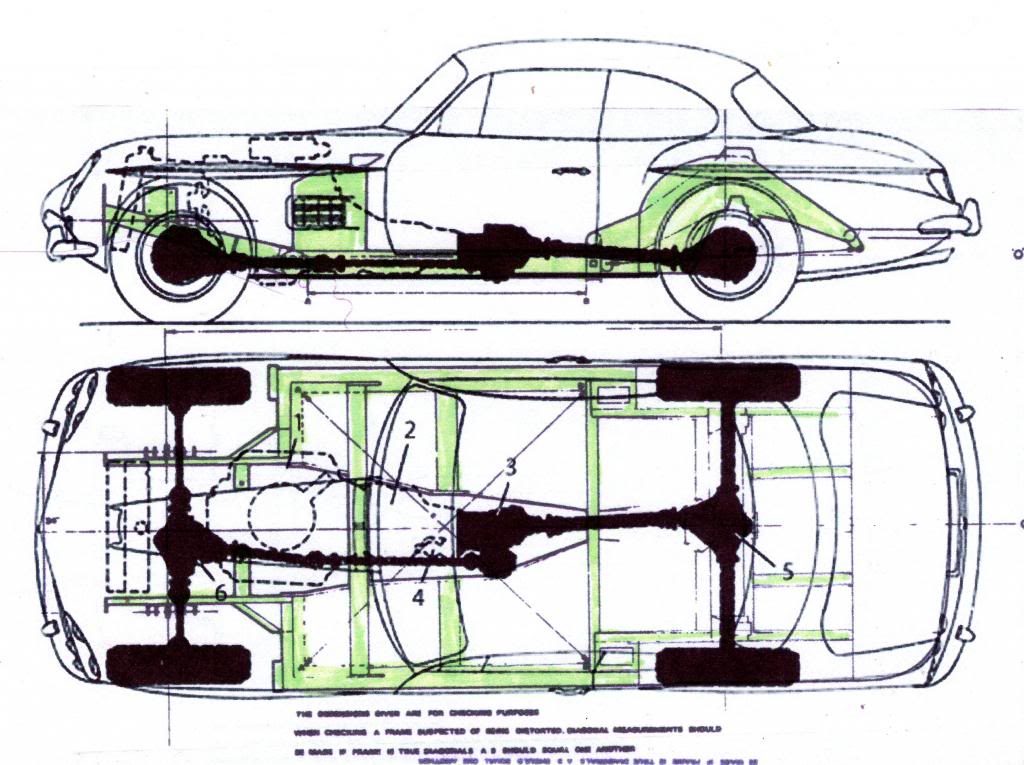 Jensen C-V8 Layout drawing, note the centrally mounted FF transfer box. This meant that the C-V8 FF had to use the 541’s perimeter tube chassis frame rather than the C-V8’s centre tube version. 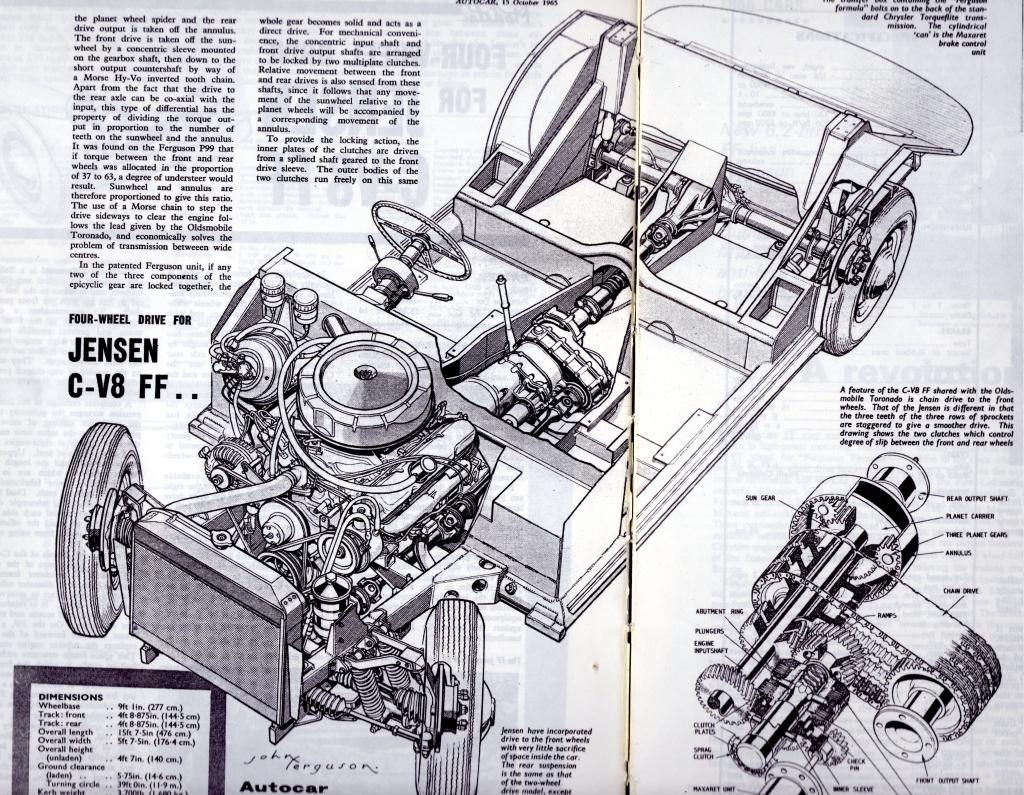 An illustrated article which appeared in the ‘Autocar’ magazine in 1965. The Touring styled (Interceptor) FFs layout was very similar.

Carters Green, West Bromwich1933 The W.J. Smith (soon to become Jensen Motors) works can be seen in the far background. 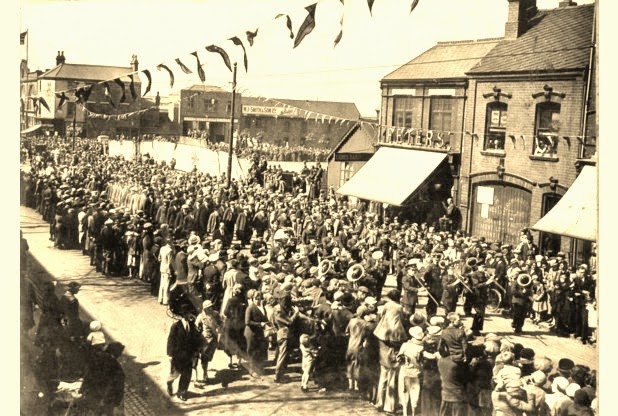 (The Chassis D.O. was in a different part of the factory)

Eric Neale is the third from the left and I am the ‘little boy’ standing at the back of the office!