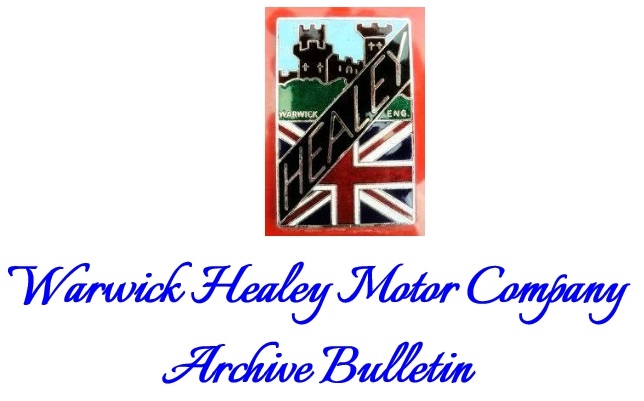 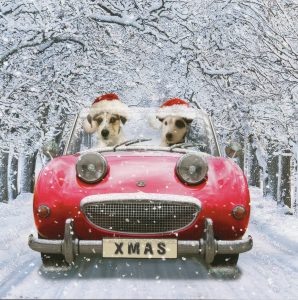 To all our subscribers and visitors 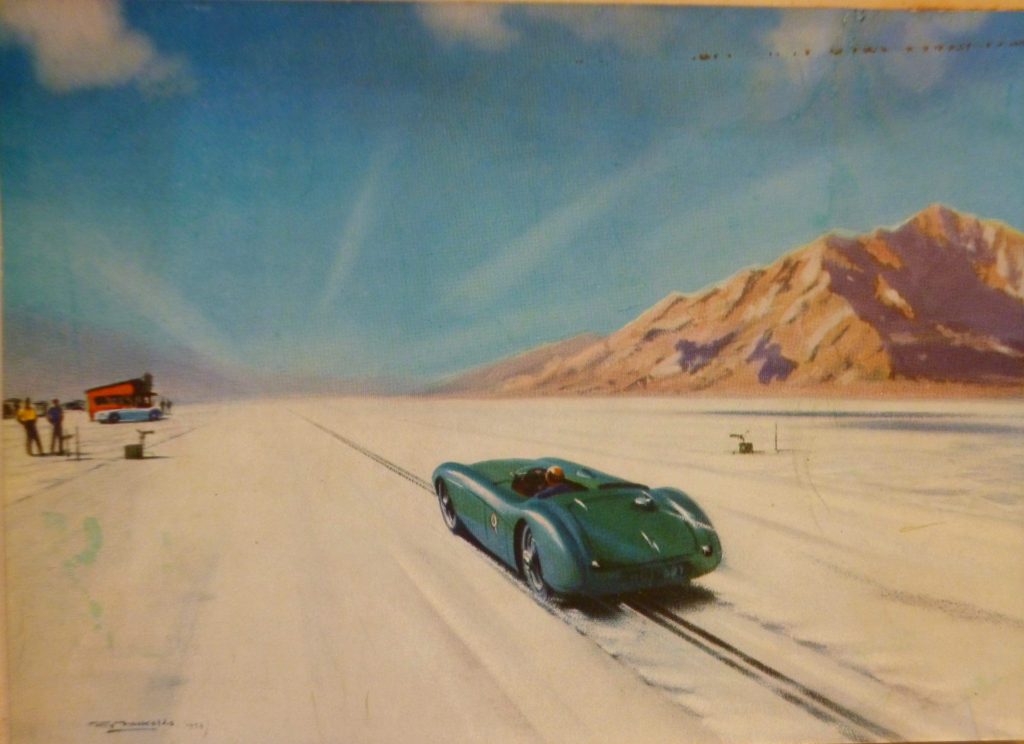 CR4804/2/61** Season’s greeting card from Donald Healey (1953) with illustration on the front showing a reproduction of a painting by Roy Nockold. It shows the Austin Healey 100 during its record breaking runs, in September 1953, at Bonneville Salt Flats, Tooele County, Utah, U.S.A. with DMH driving .

The original painting was amongst the Healey Memorabilia collection auctioned at the Goodwood Revival meeting in September 2017. 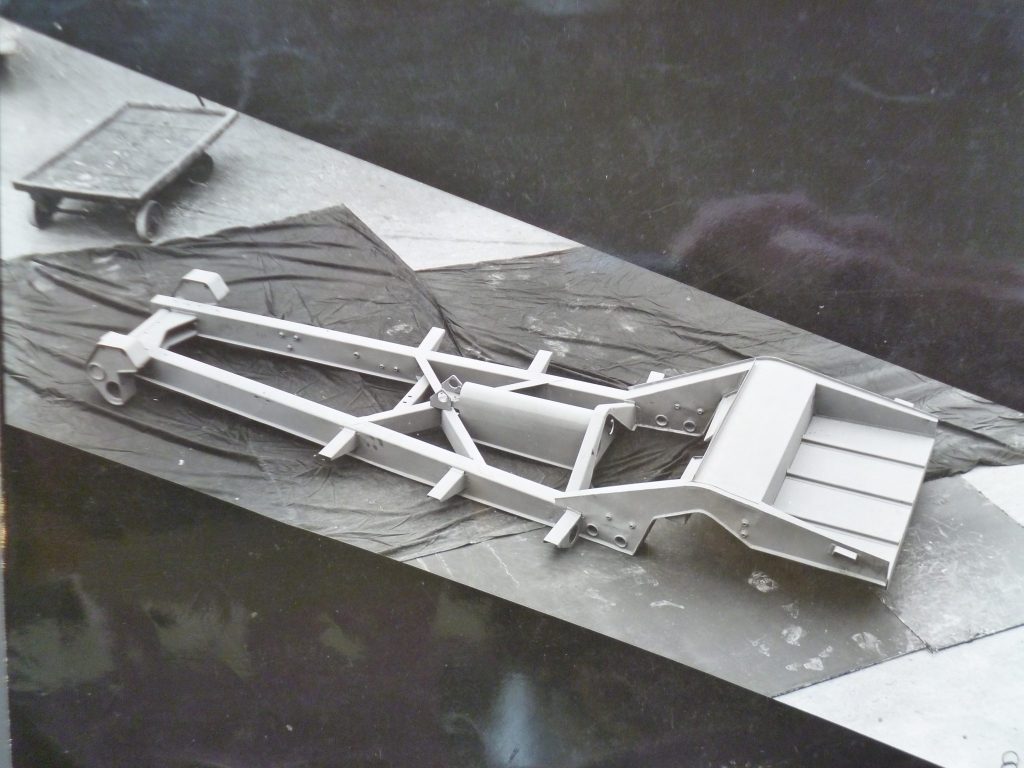 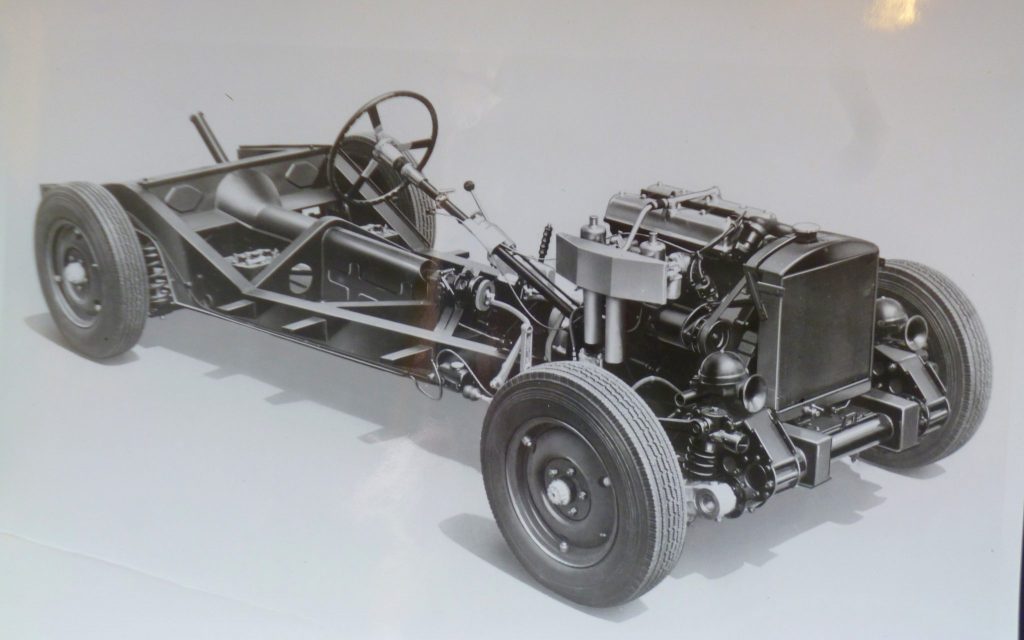 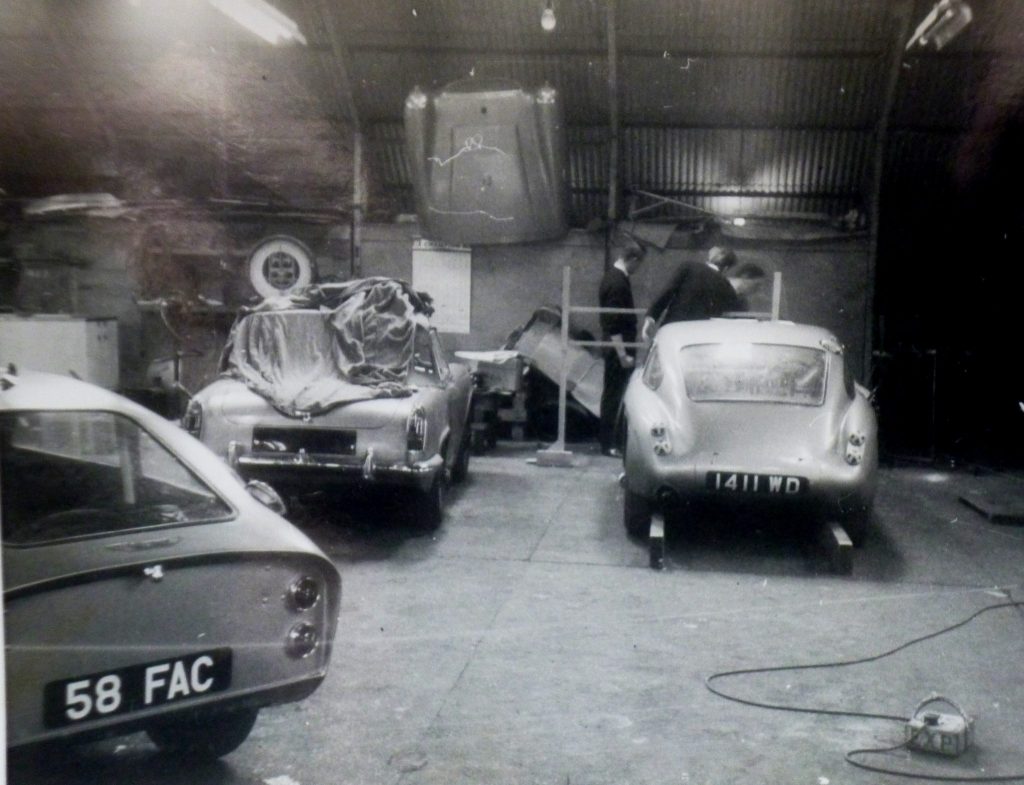 An article submitted by a subscriber –

In early October 2017 Chuck Huber a.k.a. RockyUSA posted some photos on the Jensen Owners Club forum. The photos were of an Austin Healey 100 M (lookalike?) and a A.H. Mark One Sprite. Excellent photos of iconic Austin Healeys both presented to a high standard. At the time I saw these photos I was preparing the first edition of the Warwick Healey Archive Bulletin and I thought to myself “These photos would be good material for a future Bulletin”, so I emailed Chuck and asked him for permission to use his photos in the Bulletin. I also asked him if he could write a few words about how he came to photograph the cars. This is what he wrote –

The Arizona Chapter of the Pantera Owners Club of America (AZ POCA) attended the 34th annual “Run to the Pines” car show, which was held at Pinetop Lakes Golf and Country Club, in Pinetop, Arizona. The event was held from the 22nd to the 24th of September, 2017. The show is an exclusive event, with limited participation, open only to pre-1973 vehicles.

Also participating were members of the Tucson British Car Registry (TBCR) as well as a number of other British cars from around the region.

One of the vehicles that attended was an interesting Austin-Healy 100. The vehicle was rumored to have been driven by a hardy soul from Tucson to Pinetop (approximately 200 miles) braving a rainstorm on the way.

Legend has it that the Spiderman mask that you can see in a few of the pictures was worn to ease the sting of the raindrops on the driver’s exposed face in the dead of night prior the show’s opening.

Very little is known about this vehicle (by your author) except for the very high quality of the car as displayed. One of the striking features of the vehicle is the louvres on the wing (or fender, as we say in the jolly old USA). This feature is unusual and is not believed to be a factory modification.

A quick review of the vehicle reveals the original wire wheels with knockoffs, drum brakes all around, beautiful chrome, and a lovely interior. The only thing that seems to be missing from this car are the windshield wipers!

In addition to the AH100, a beautiful Sprite was also on display. I provide a few photographs for your viewing pleasure.

In general, the 2017 “Run to the Pines” was a spectacular event. A little rain sprinkles in the morning caused the event to be delayed, but once the clock registered 10:00 AM, the participants began arriving in droves. The light cloud cover was a welcome change from the typical Arizona sun, but this burned off by early afternoon.

The 2017 AZ Run to the Pines event was a tremendous hit, showcasing the best of Arizona Classic cars. It was a real treat to attend, in a spectacular venue, surrounded by such beautiful machinery.

The key question for me, regarding the 100 M lookalike – is it one of the original 640 factory built Ms or is it one of the c500 cars equipped with the dealer fitted or supplied ‘Le Mans’ engine tuning kit and then had the original bonnet [hood – divided by a common language :-)] replaced by the louvred version? Is the transverse retaining strap as fitted to ‘S’ and factory built M models original? Or, is this AH 100 one of the many cars converted to ‘M’ specification by enthusiasts in the decades following the original M production?

As Chuck says, the air vent in the wing is non standard, I have never seen anything like that before and it is the presence of such a modification which suggests to me that this is not one of the original 640 Ms.

I emailed Bill Meade, based in Ca., who runs the AH 100 M and Le Mans Register, to see if he could throw any light on this car. All I had to share with him were the photos and the name on the ticket displayed on the windscreen, which I assume to be the owner.

Not surprisingly, with such scant information, Bill was not able to throw any further light on this car. The man’s name did not appear in either of his registers.

So, all we are left with is a fine looking Austin Healey 100, with M type attributes, of unknown provenance, looking good in the Arizona sun. Thanks very much for sharing Chuck. 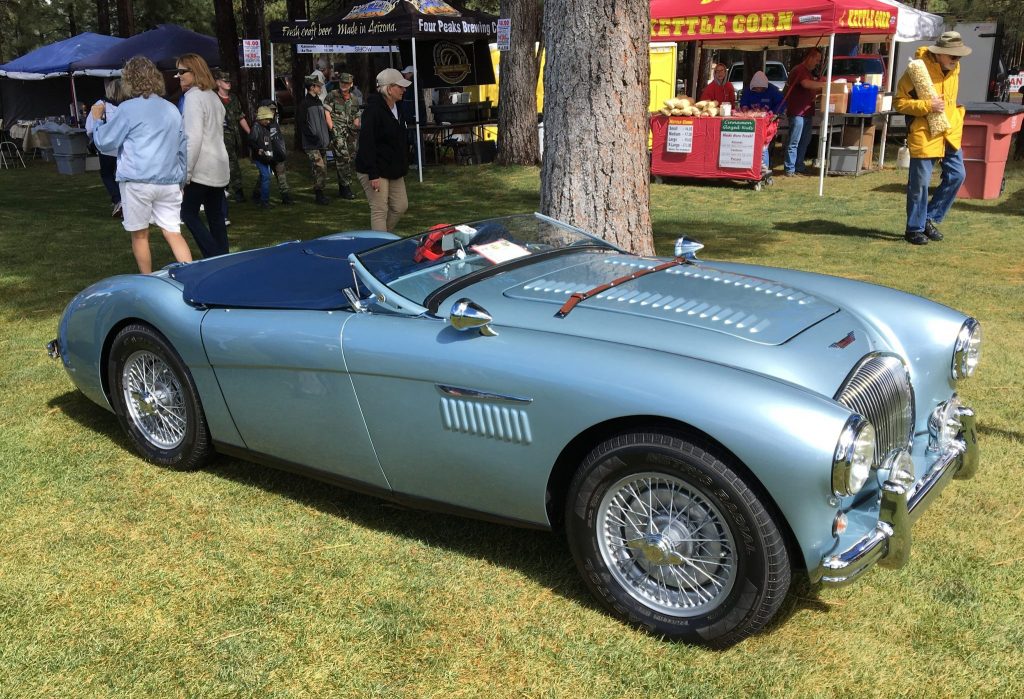 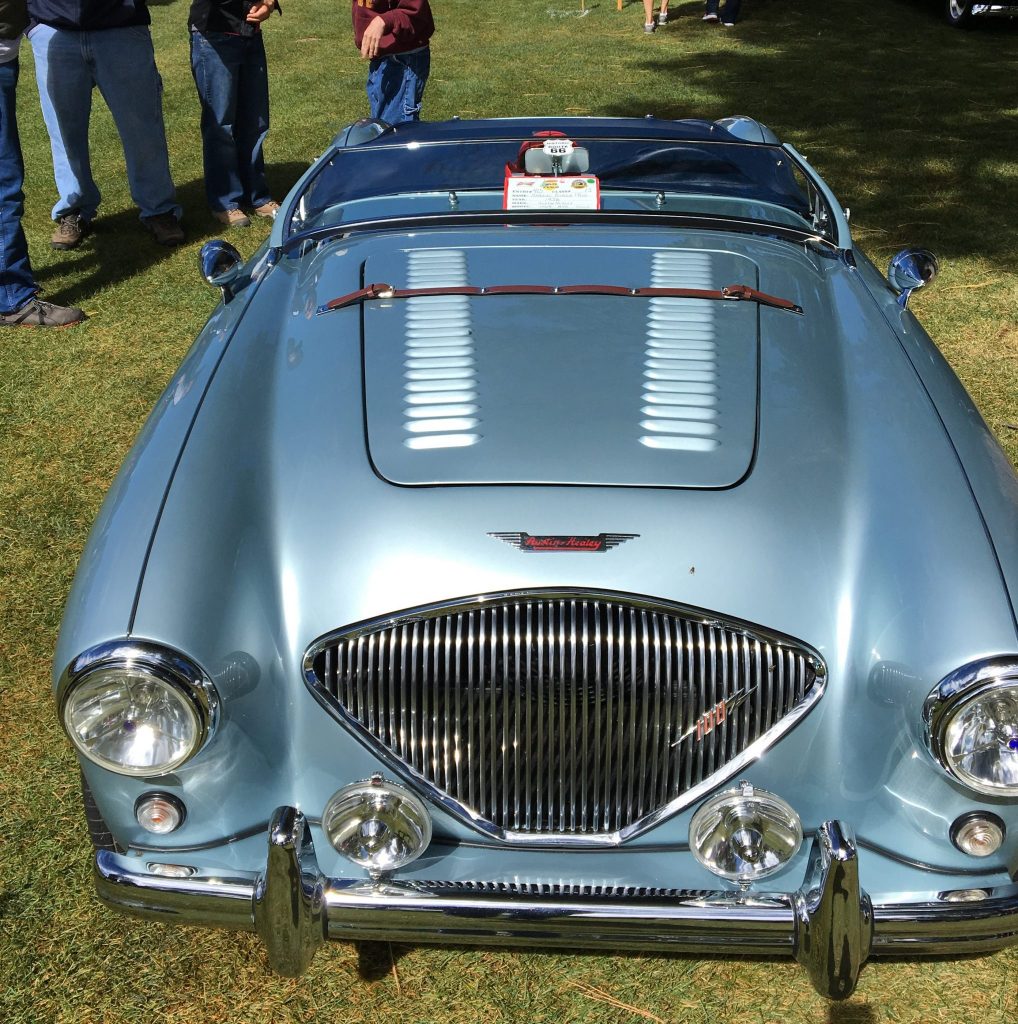 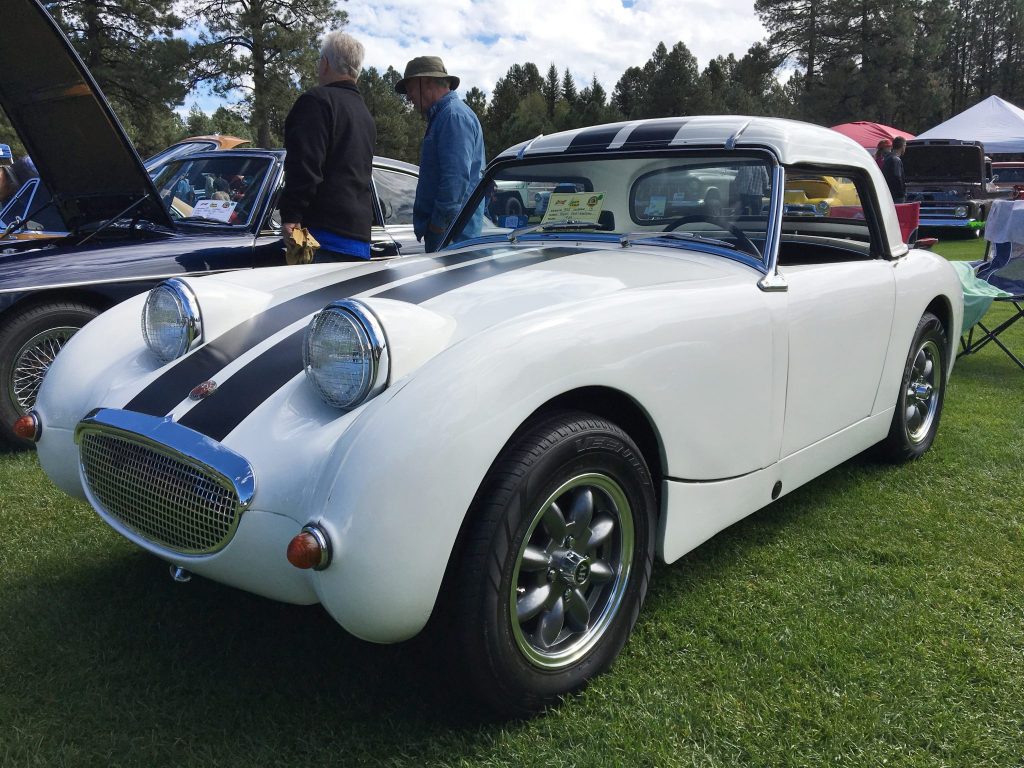 This visit, in early December, came about as a result of an enquiry that I made about the Healey Westland, GWD 43. This car featured in the first Bulletin, October 2017. I had read somewhere that Classic Restorations had rebuilt this car after it had been discovered in a pretty dilapidated state. My contact with Warren was made via the WCRO, Warren had been very supportive of the Record Office when they first took over custodianship and then ownership of the Healey Motor Company Archive. Warren very kindly invited me to visit Classic Restorations to have a general chat about all things ‘Healey’.

I soon learned that Warren has encyclopedic knowledge when it comes to ‘Warwick Healeys’ i.e. pre Austin Healeys. He told me that GWD 43 had passed through his hand on several different occasions as both owner and custodian. It is with him at the moment under the latter status, as are many other ‘Warwick Healeys’ including two very rare Duncan Drones. I will be very honest and say that whilst I did know about the Healey Duncan saloon and the diminutive Duncan Dragonfly prototype powered by a BSA 500cc air cooled engine, I had not previously come across the Drone. Apparently only ten were made in c.1947; for Warren to have two of those cars in his possession is extraordinary.

I hope that the contact with Warren will continue and be a source of some very interesting information for future Bulletins.

Have you got a ‘Healey’ story to tell? please send it to –  warwick.healeyarchive@carsceneinternational.com

This will take you straight to WHMCA ‘online’ Catalogue.

Congratulations to Coventry for being voted the U.K.’s City Of Culture 2021 ( it is a four year tenure currently held by Hull).

This will not only benefit the City Of Coventry but also the surrounding area, including Warwick. It will be another opportunity to shine a spotlight on the Healey Motor Company Archive. 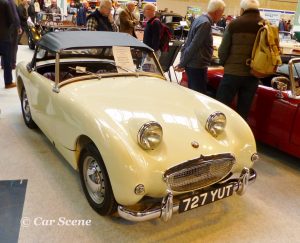