Cars – A Story of the Hudson Motor Company, Detroit, USA

When this film first appeared in 2006 it did not grab my interest, in fact I was slightly alienated by it because I thought that the subject of cars (automobiles) is far too serious, to me, to make fun of. Also our children had grown up so there was no need to take them to see it, as would have been the case some years earlier.

Then in 2011 ‘Cars’ was shown on TV and I watched it. Despite previous misgivings, I was captivated, I loved it! I was so taken by it that I started to do some research on the ‘Doc Hudson’ character.
Imagine my excitement when I discovered that his background as a ‘Race-car’ Champion was based upon fact – The fabulous Hudson Hornet,  winner of both NASCAR and ARCA championships in the early 1950s. Further, I discovered what a rich and exalted marque the Hudson was.

I had known about the company but probably only in the context of it being one of the constituent parts of the American Motors Corporation formed in 1954.

This is going to be a relatively short post; it would be so easy for me to plagiarise other websites and list all the excellent ‘firsts’ that the Hudson Motor Company brought to the world of motoring. I am not going to do that but I will list some links to the websites that contain that information at the end of the post.

One interesting and personal fact that I do want to share with you is that I worked in Detroit for a draughting (American – drafting) ‘job shop’ doing work for Chevrolet. I worked on the  ’71 Impala.
Occasionally I used to visit Downtown Detroit (English – City Centre) and the Hudson store in particular.
It is only as a result of researching the Hudson Motor Company’s history, for this post, that I found out that it was the founder of that Hudson store, Joseph L. Hudson, who provided capital and his name, to the Hudson Motor Company.
Serendipity or what?

I also found out that Hudson had an assembly plant at Chiswick, to the west of London. This is referred to below. I hope to undertake further research on Hudson’s U.K. presence.

I wanted to find out more about the Hudson Motor Company’s presence in the U.K.:
I undertook, what I thought was, some extensive ‘Google’ searches and made email contact with people who might have knowledge of the subject, all without success.
Until today (06 March 2014) that is. Having given up my search for a few weeks, feeling utterly frustrated, today I tried ‘Google’ one more time.
My feeling about ‘Google’ and other search engines, is, that just because you do not find what you are looking for it doesn’t mean that the information doesn’t exist; it is more likely to mean that the words you are using for your search, however logical they may seem to you, do not represent the key to the treasure chest that you are seeking.
In my case I was using names such as Hudson, Essex, Terraplane and U.K..
Today I put “motor clubs catering for Hudson and Essex cars in the U.K.” into the search box and came up with the ‘Railton.org’ website. Unless you are very knowledgeable about the history of the U.K. motor industry it would not be obvious as to why a ‘Railton’ website would throw any light on Hudson Motor Company’s presence in the U.K.
To find the answer to that question you will need to click on the ‘Railton’ link at the end of this post.
I found the information totally fascinating, I hope you do too.

Just to recap, the purpose of this post is not to provide a ‘blow by blow’ history of the wonderful Hudson Motor Company. Its purpose is to bring the existence of this company to your attention if you hadn’t heard of it before and to encourage you to read more about the company by visiting the links shown at the end of this post.

Here are some photos which I hope will further stimulate your interest : – 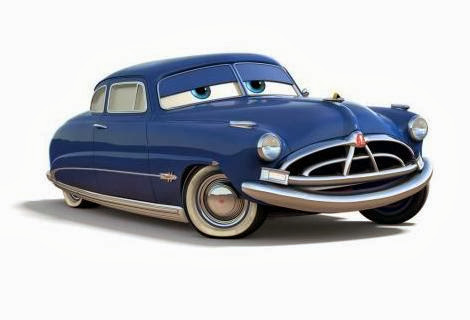 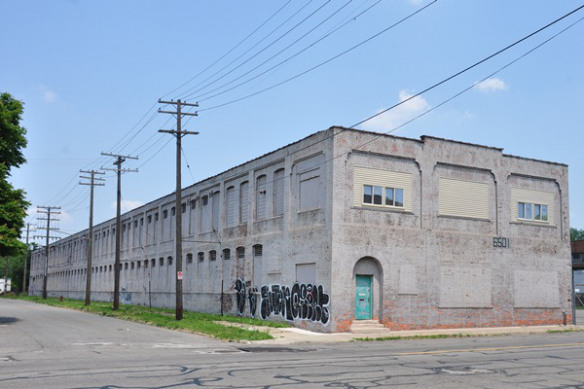 Part of the old Aerocar/Hudson factory still standing (or it was in 2012)
on the corner of Mack Avenue and Beaufait Street old Detroit Mi.
Photo courtesy of www.macsmotorcitygarage.com

The History of the Great West Road by James Marshall ALA (page 64)
The
Hudson Essex Motor Works
The Hudson Esex Motor Company virtually began the industrial colonisation of the Great West Road moving from Acton Vale to purpose built premises sited between the new North Circular and Great West Roads at Chiswick in the spring of 1926.
Essex Cars formed the lower-priced model range of the Hudson Motor Company of Detroit. Their success made Hudson the third largest motor manufacturer in America in 1929, and they proved popular in Britain as well.
In the late 1920s the ‘Essex Six’ offered buyers a range of bodies powered by an 18hp, six cylinder engine. This two and a half-litre side valve could be expected to return about 20-22mpg and a new car cost £250. So keenly were Essex Cars priced that brakes on the front wheels remained an optional extra, costing an additional £7 until 1928.
In 1932 the upright looking ‘Essex’ cars were replaced by air-smoothed ‘Terraplane’ range which sold for around £300, making them comparable in price with the top of the range Morris models. More successful in Britain than in America, the ‘Terraplane’ was discontinued in 1937 and the Hudson name was transferred to the company’s range of smaller six-cylinder cars.
The motor works provided facilities for the assembly of vehicles imported ‘completely knocked down’ as well as for servicing and selling new cars.
Information
supplied by Janet McNamara of Brentford & Chiswick Local HistorySociety


This story gets richer and richer. Did you know that…….

As Featured in the Sony PlayStation game – GranTurismo 6 Mario and Aldo Andretti’s first race car was a 1948 Hudson Hornet. 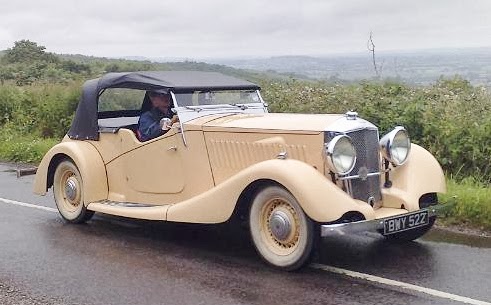 Other manufacturers who used the Hudson chassis and drive-train – Railton (U.K.) 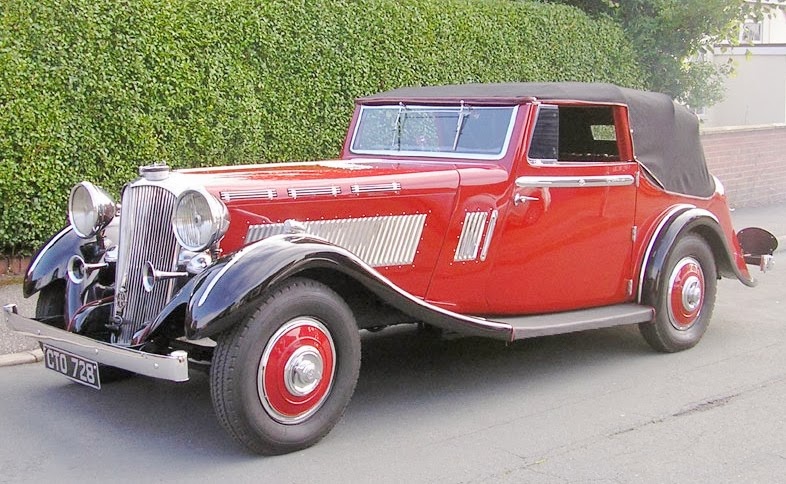 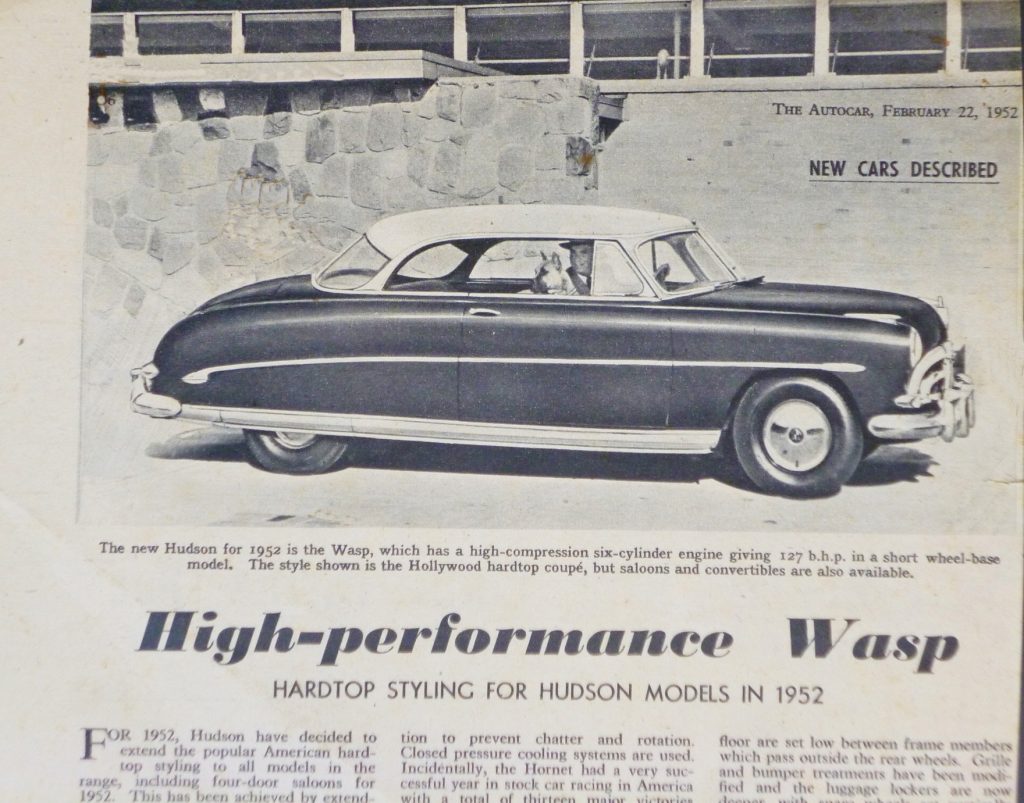 Update May 2018 – I am a volunteer with the Warwick Healey Motor Company Archive and publish a monthly Bulletin showcasing the contents of the archive. Last week I was looking through some of the archive material which is held the Record Office in Warwick, U.K.: much to my surprise I came across some press cuttings, dated 1952, featuring the Hudson Wasp.    Here they are. 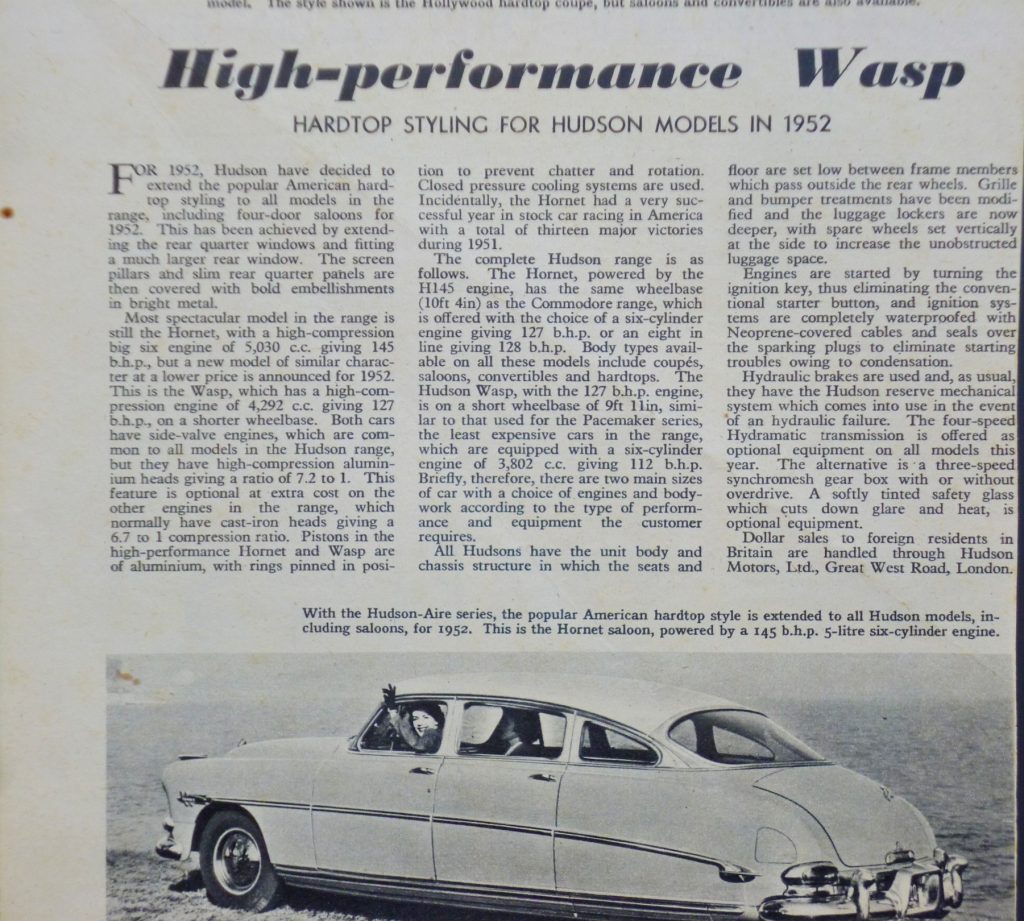 Sally Carrera re born for Charity

14 February 2019 – It’s St. Valentine’s day and I have just fallen in love with this article I have read on ‘Hemmings Daily’. I think that you will too –

If you want to find out more about the great Hudson Motor Company then I recommend this link  –       http://histomobile.com/history.php?id=88483

If you are in the U.S. and you would like to see a comprehensive collection of Hudson Cars or you want to see them on the internet go to this link – http://www.hostetlershudsons.com/

Find out more about the Hudson Motor Company’s presence in the U.K. and its relationship with the Railton Car Company by going to this link – http://railton.org/category/history

For an active club dedicated to Hudson, Essex and Terraplane cars visit –  http://www.hetclub.org/