We visited the USA in September 2017. The main purpose of the trip was to visit some of the historic 17th century landing sites of our intrepid English forebears.

Having done Williamsburg and Jamestown etc. we flew with American Airlines from Washington Ronald Reagan to Providence Ri where I hired another Ford Focus Titanium from Avis. We stayed in Providence for two nights then drove down to Plymouth Ma., it was while staying there that we visited three car collections.

Although the main purpose of this trip was for us to visit historic sites I had also pencilled in visits to a least two car collections. A third was suggested to us ‘en voyage’. The purpose of this post is to share with you photographs from one of the locations that I discovered as a result of internet research.

When I first started planning this trip some months ago I knew that I wanted to visit at least one car collection while I was in the U.S. I started doing some research based upon the places we were going to visit. The first collection to pop up was Bill Putman’s collection of mainly post WWII English sports cars at the amusingly named ‘Toad Hall’. You will have to visit the website, as I did, to get the full story, be prepared for a few surprises in the stories being told.

At this stage I could just go into showing you the photos that I took of the cars but that would be slightly dishonest. I feel that I should recall how hugely disappointed I was in the state of the cars.

Basically, they are rusting away in conditions that are ideal for corrosion to reign supreme. It is a very sad situation for any car enthusiast to see, especially someone like me who has a good idea as to how much some of these cars would be worth if they were in pristine condition. As each month goes by the amount of restoration work required increases. Bill is fully aware of the situation and will eventually sell the cars, in fact the collection isn’t as large as it once was because he has sold some of them already. He insisted that he does try to keep them as “runners” and he employs a man to service them on a full time basis. So, maybe when, as I hope, the cars are sold to owners who will spend time and money on restoring them it will be the bodywork and trim that will require most attention.

I have no doubt that Bill loves these cars and that there various histories, in his hands, mean a great deal to him but circumstances have crept up on him and them. In my humble opinion the only satisfactory solution is for them to find new homes as quickly as possible. On the other hand America is the land of the free and home of the the brave so you can do what you damn well like.

By the way; you cannot fail to notice that all the cars are red – apparently like Mr.Toad’s car is in Kenneth Graham’s ‘Wind in the Willows’ (I am afraid that fact had passed me by when I read that book to my children). And all the cars carry at least one ‘Minuteman Racing’ sticker in recognition of the name of Bill’s racing team. As I say, you will have to visit his website, all will be explained.

Here are some of the  cars currently in Bill’s collection – 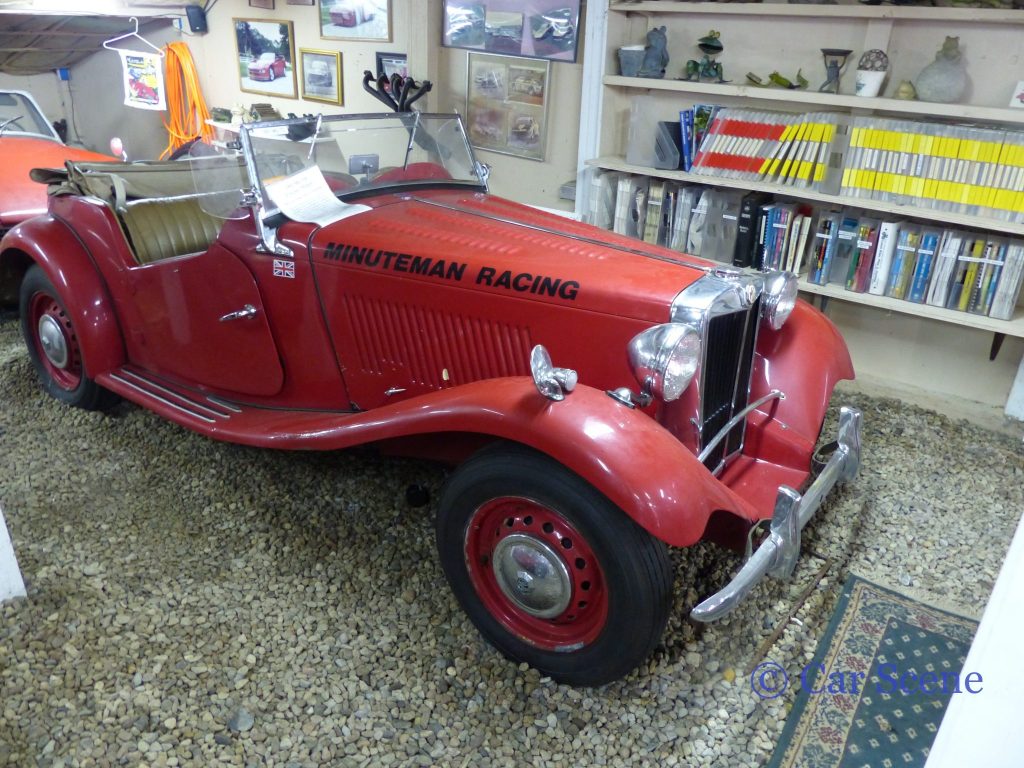 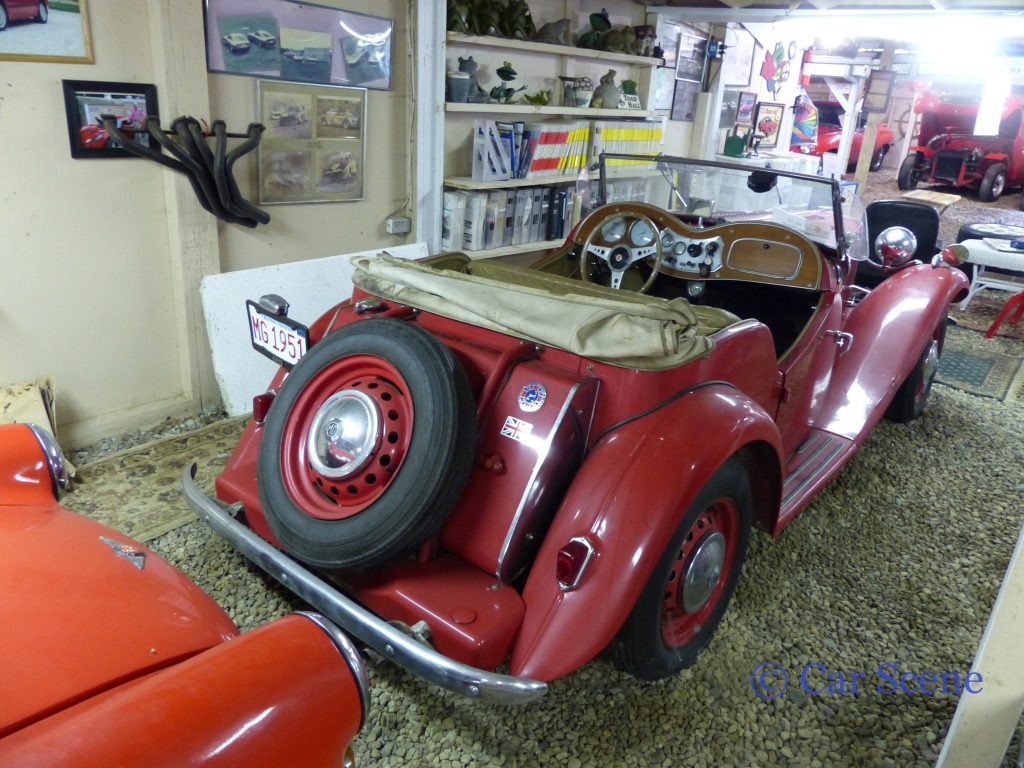 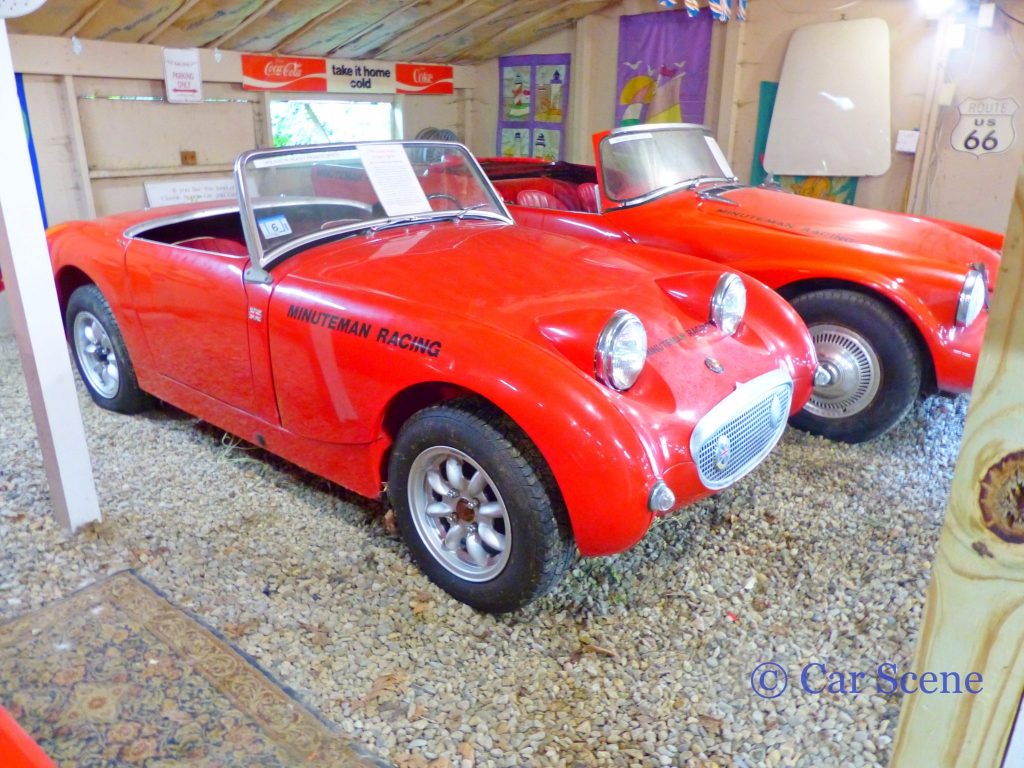 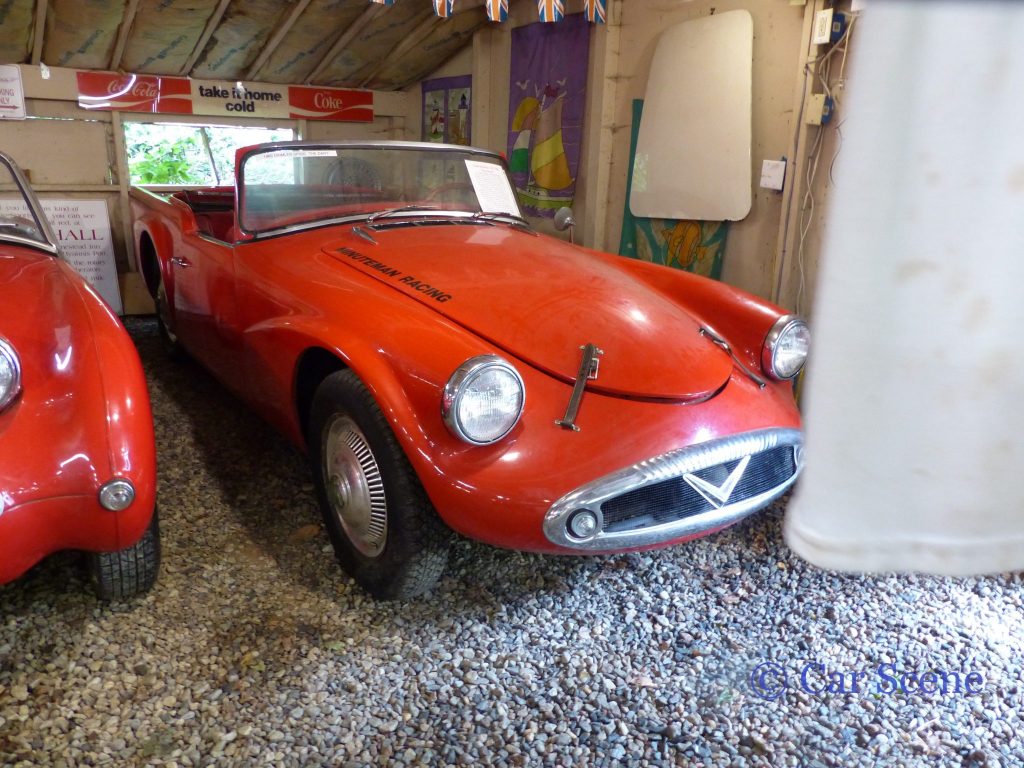 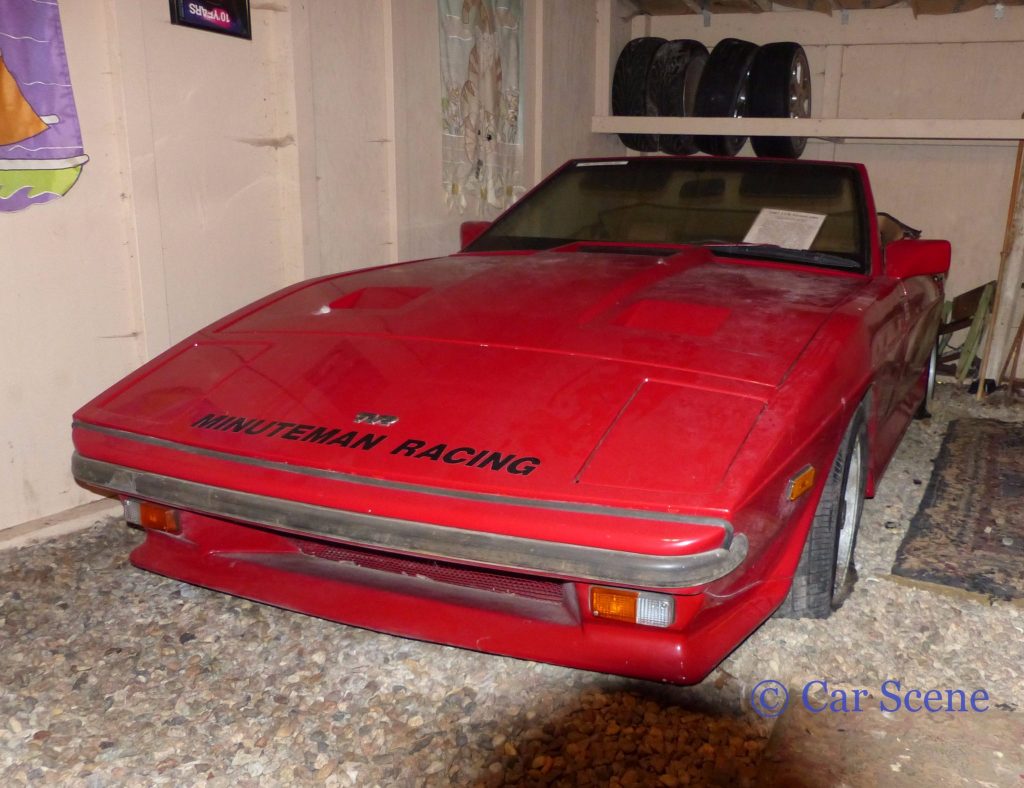 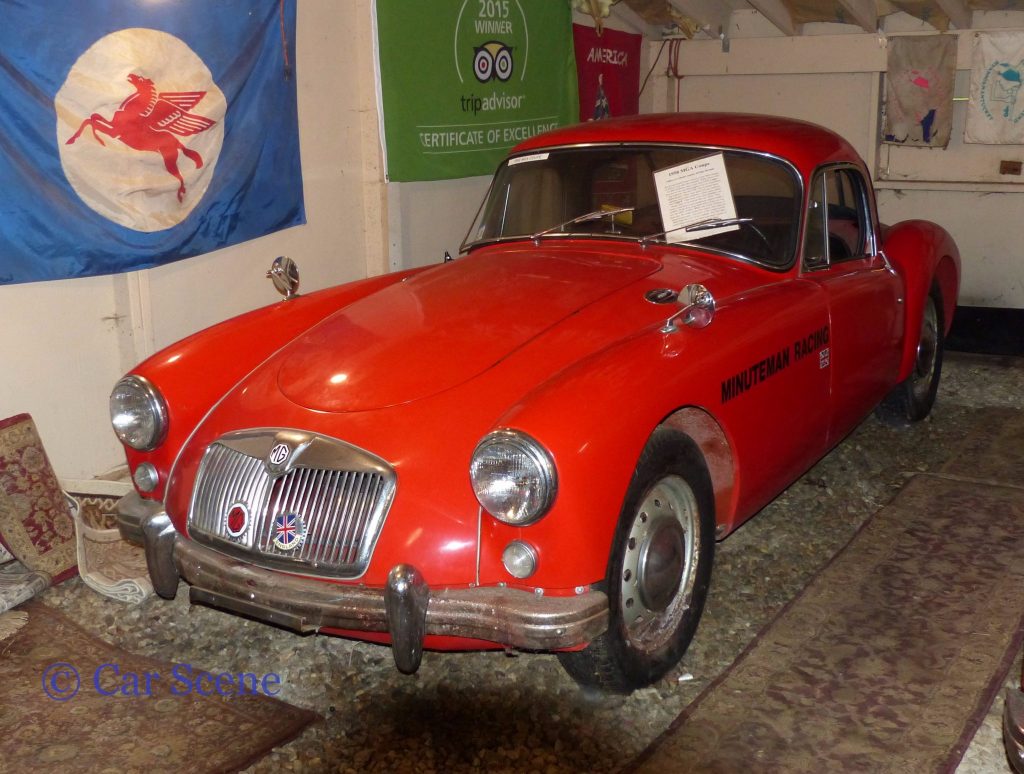 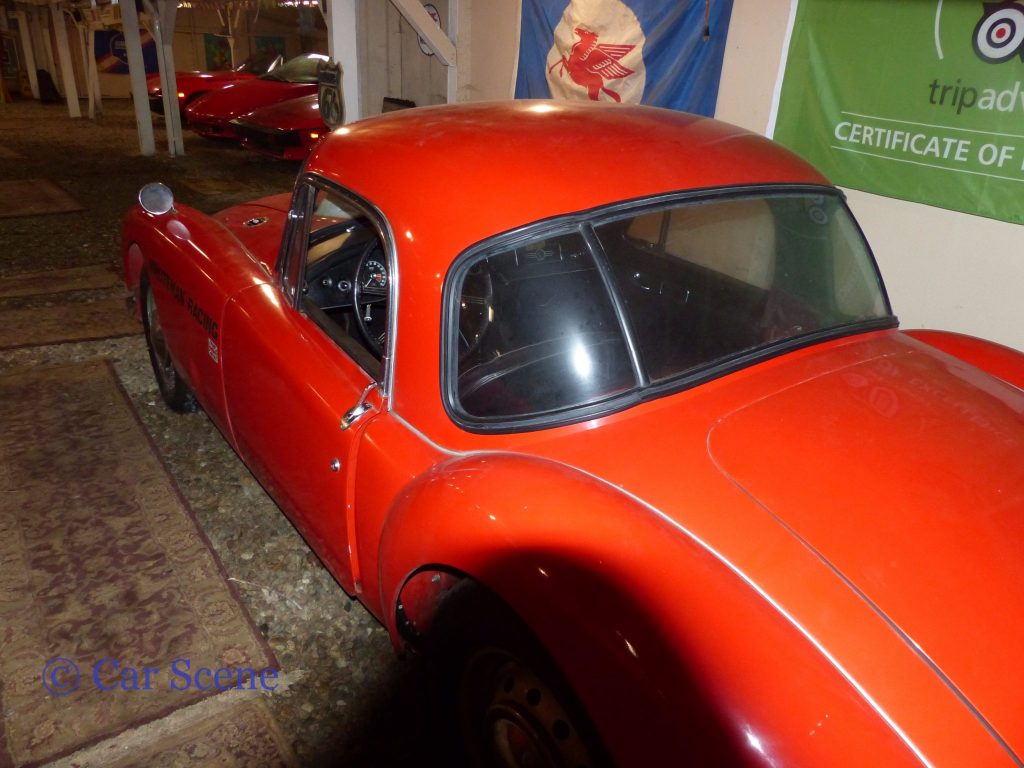 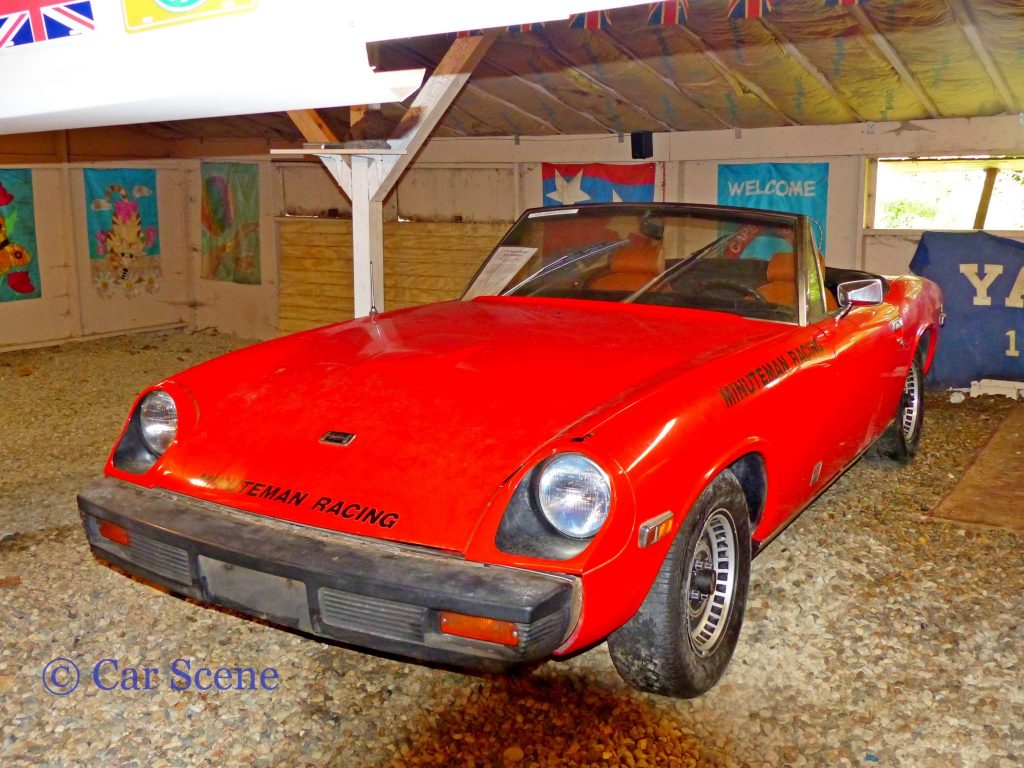 Other Triumphs  – TR6 and TR3A 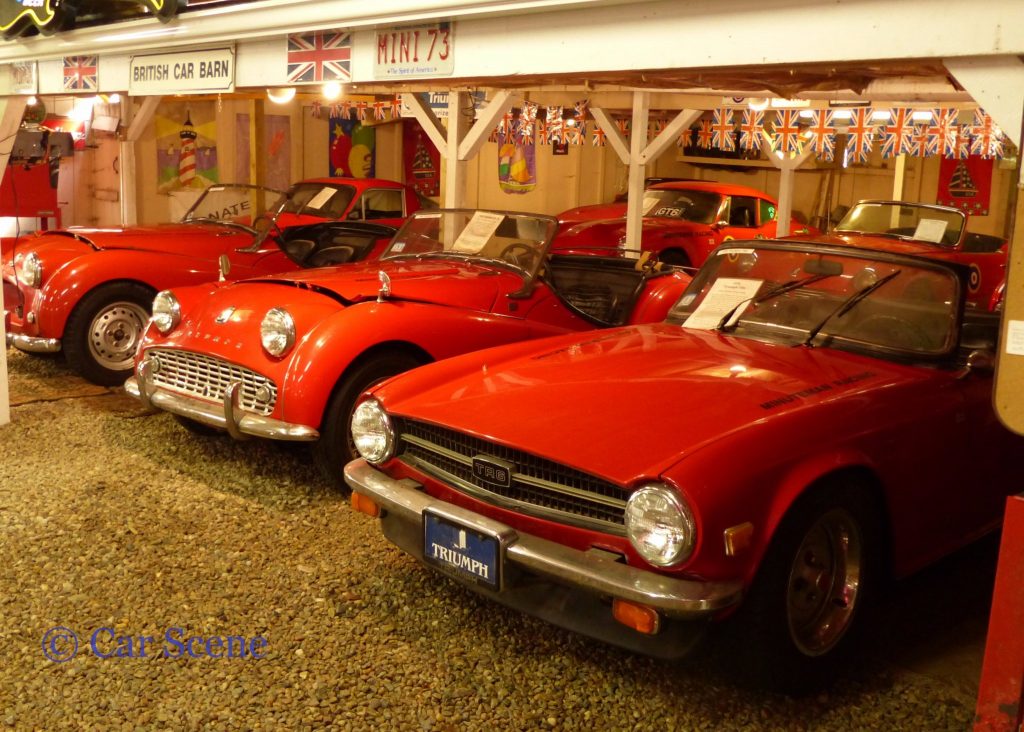 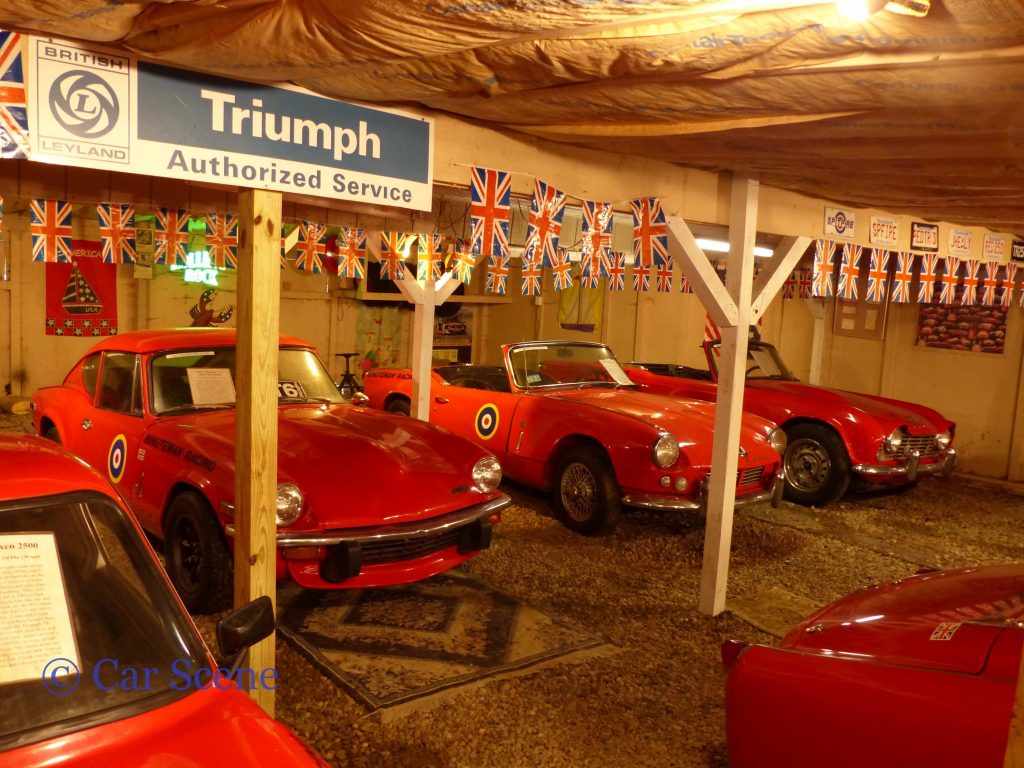 Bill had these Neon signs made by a local artisan – they are works of art in their own right. Sadly the maker is no longer with us. 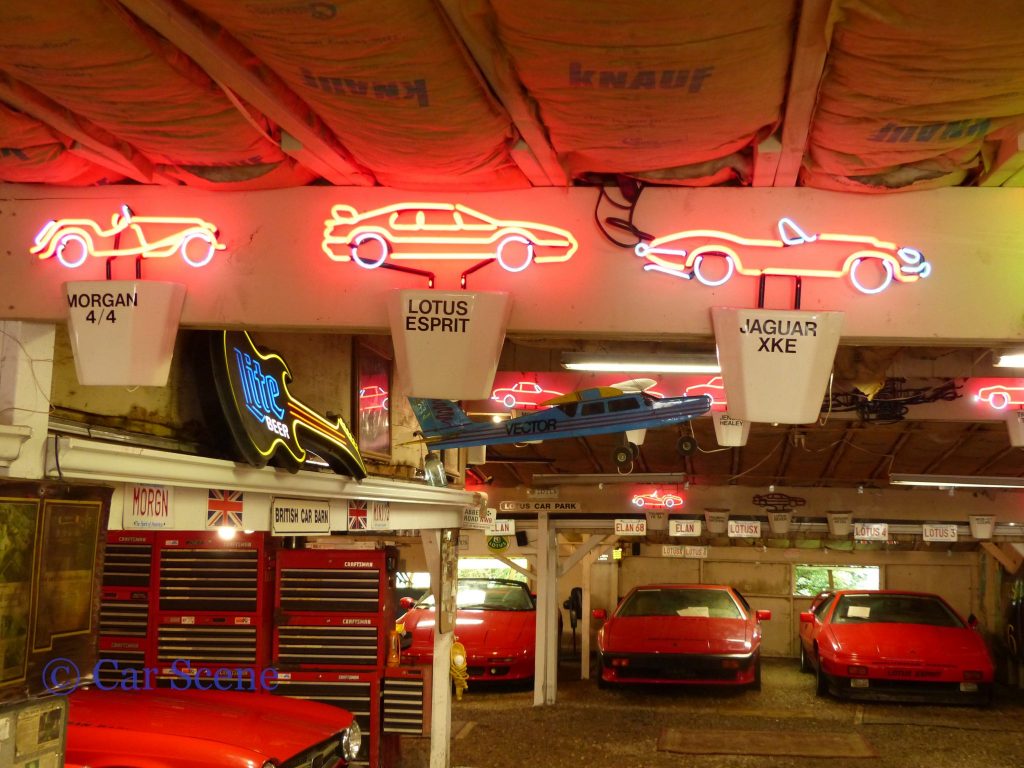 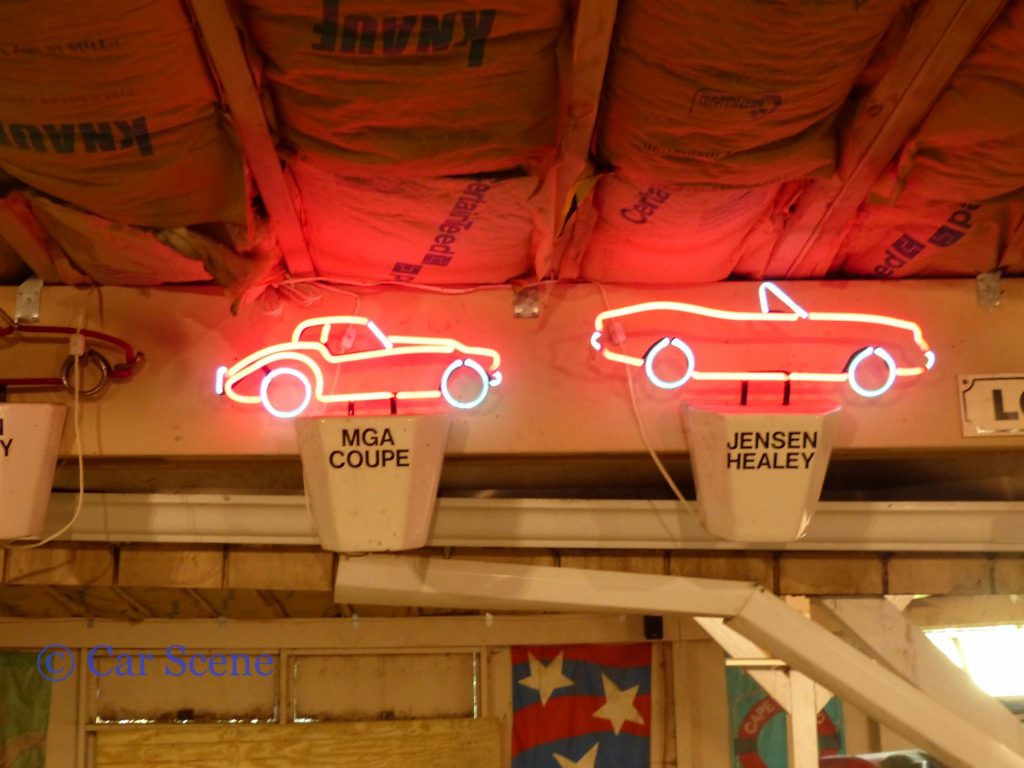 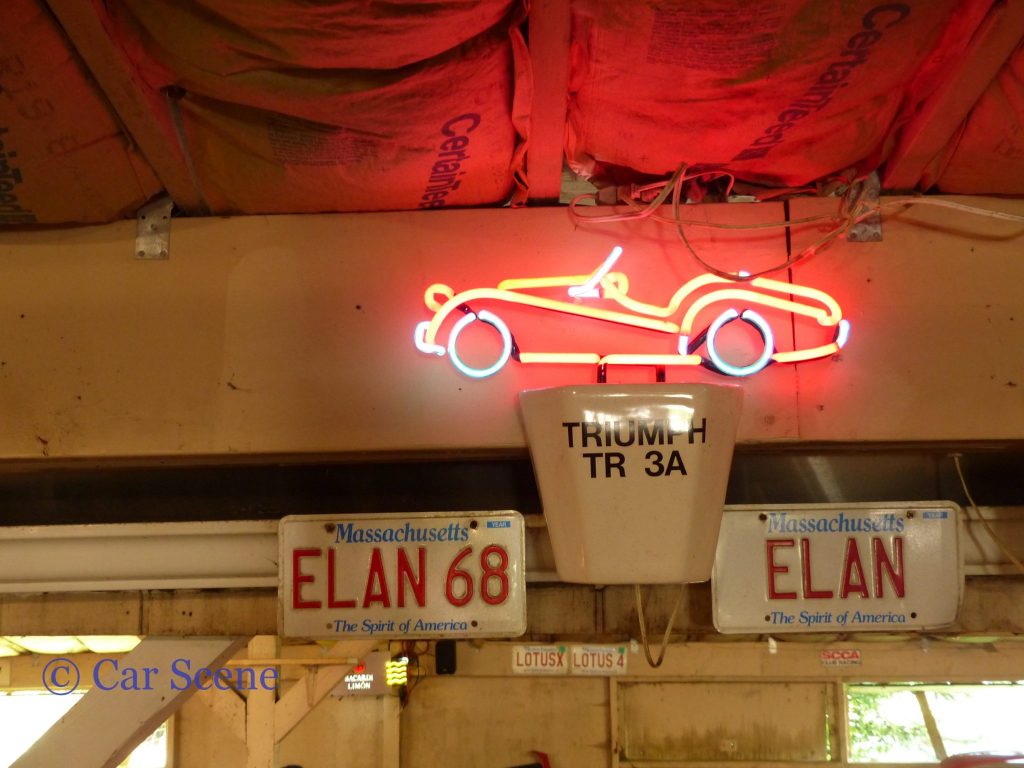 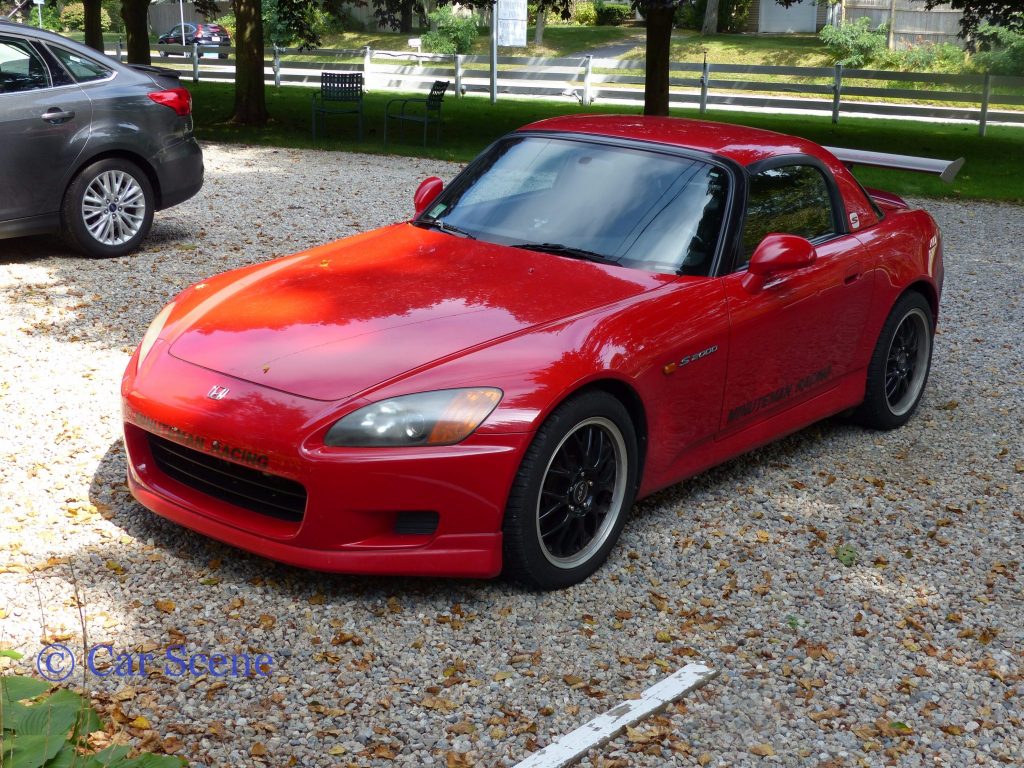 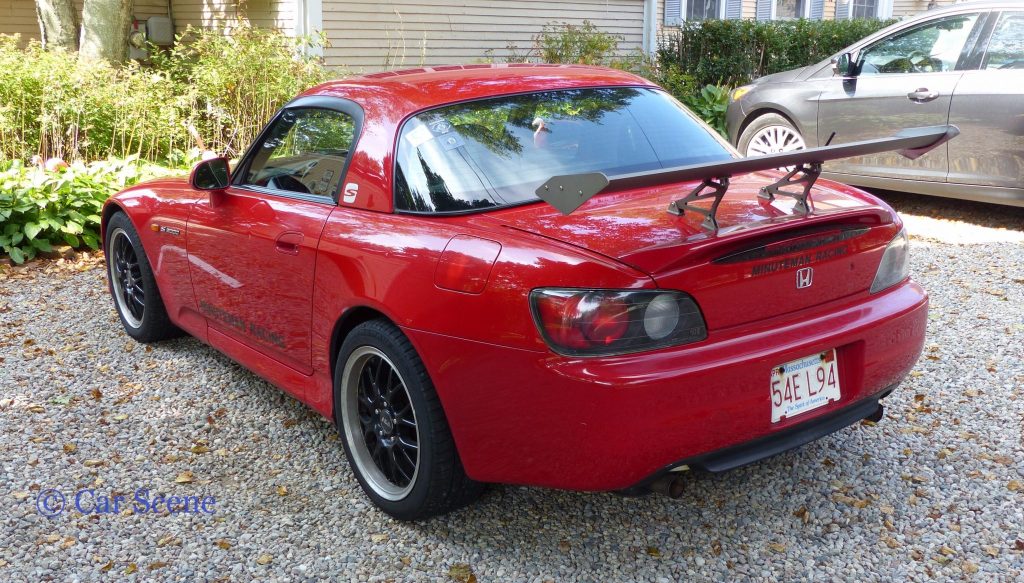 Here is another Museum we visited – different class     https://www.carsceneinternational.com/classic-cars-in-newport-ri-usa/